Bernard T. Ferrari was 81 days into his job as dean of the Carey Business School when he stepped up to a lectern to outline what he had in mind for the school's direction. The subtitle of his address was "A Humanistic Approach to Business and Business Education," an indication that he intends to continue the program's emphasis on training businesspeople to understand that, as he put it in his speech's conclusion, "business success should not be an end strictly unto itself but rather the means for building a more successful society. 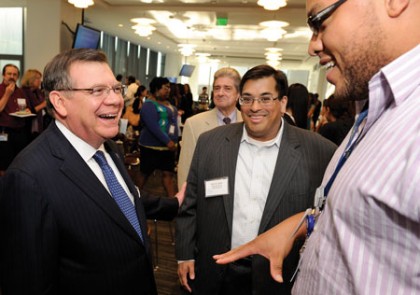 "We aspire not just to be different from other schools, not even just to lead, but to show a new way," he said.

Ferrari, who replaced founding Dean Yash Gupta last June, noted that public faith in corporate chief executives had declined substantially, and even faith in capitalism appeared to be wavering, forcing the most advanced capitalist societies to begin redefining the role of both public and private economic prerogatives. He said, "Those of us in the business of business education are compelled to ponder what has brought us to this pass."

In response, he said, business schools must train future leaders who can navigate with agility not only business but government and social sectors, and who "understand the consequences of their behaviors on the greater stage called market, called community, called society." Going forward, the Carey Business School, he said, will concentrate on four parts of the American economy "that involve alarmingly large amounts of resources": real estate and infrastructure, national security, health care, and financial services. He noted that the school had recently decided to strengthen its programs relating to health care and the life sciences, and he emphasized its commitment to research: "It is among my chief objectives to see that the Carey Business School becomes an equal contributor to this university's great culture of discovery."