Buy low and sell high. Sounds easy enough. You start with a $400,000 trading limit and plenty of time on the clock. The $100/unit price offered by INITVE seems reasonable. A thousand units for only $100 each? You click Buy. The market looks like it's going up, so, titan of industry that you are, you sell your 1,000 units at $102, making a nice $2,000 profit. Easy. But then the client trades start coming in. Buy 1,500 units from FORTNE at $104/unit? What's the market doing? Is it going up or down? Now another incoming client trade. The clock is ticking. Too late—you react too slowly and both trades are canceled. A few moves later, the market seems to be going down steadily, so you sell short—1,000 units from ARBITR for $101/unit. To make a profit, now you'll have to buy for less than you sold to replace the borrowed shares. You wait until you see RISKER offering $97. You click Buy, only to see the word Rejected flash on the screen. INITVE is offering $99—Buy! Rejected. The market is going back up . . . your time is winding down . . . 3 . . . 2 . . . 1. Congratulations. You just lost $30,000. 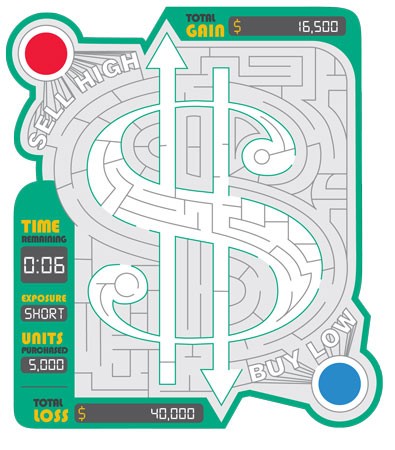 The company's idea is this: Make fun games that generate psychometric data for employers. To that end, it has partnered with two consulting psychometricians from Columbia University to develop a testing platform that uses games instead of tests. Working directly with employers, it helps assess candidates in a company's hiring pool. "We work within the framework of what firms are already doing [to screen candidates], but we encourage them to use games as well," explains Tanenbaum. Part of the goal is to help employers identify the best candidates, but he says ConnectCubed also wants to help job seekers obtain positions on a meritocratic basis. Instead of relying solely on more traditional criteria, such as education and experience, candidates have the opportunity to further distinguish themselves through their performance on psychometric assessments.

Jillian Macnaughton, A&S '10, who works closely with applicants as ConnectCubed's community manager, says that another possible benefit of games as assessment tools is their potential for dynamic testing as gamers hone their skills over time. This also provides longitudinal data, Tanenbaum says, so the company can recommend job seekers for positions that are likely to be a good fit—a plus for the banks, hedge funds, and private equity firms that make up ConnectCubed's small but growing client base, which it is looking to expand to other industries. Through not only the games but the social interaction on the site, ConnectCubed can collect other data on job candidates, such as response times and personality types. For example, one set of online behaviors might indicate that a player is well-suited for a job as a trader; another might mean he or she is a deeply analytical thinker who would be more satisfied working on long-term projects.