As a technical sales manager for an international chemical firm, Bob Riley, Engr '98, relies every day on what he learned in Johns Hopkins classrooms and labs. But he also carries with him abilities and insights gleaned from another campus location: the foam-covered floor of Goldfarb Gymnasium where he grappled for the Hopkins wrestling team for four years. 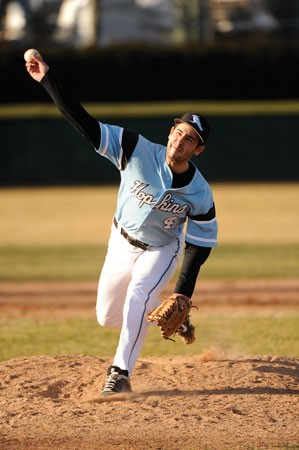 "The level of competitiveness involved with being a wrestler and the unrelenting dedication and preparation required are things I draw on all the time," Riley says. "Learning how to deal with emotional wins and painful losses gets built into your character, and I don't think there is a better way to develop leadership."

So, in summer 2011 when Riley heard about the inaugural Forever a Blue Jay Challenge, the yearlong fundraising campaign that playfully pitted sports programs against each other in a race to bolster giving to athletics, he knew what he had to do. It was time to go back to the mat for his old team. "First, I donated," Riley says. "Then I started encouraging other wrestling alumni to not only get in there and donate themselves, but to circulate the message to their own lists of friends who were on the team."

And this was what the Forever a Blue Jay Challenge was all about: building support for each sport from within each sport, valuing participation as well as dollars. Bodies and bucks. Here's how it worked: From July 1, 2011, to June 30, 2012, all 24 varsity sports programs worked to increase giving and participation in pursuit of two $5,000 prizes. One prize was for whichever program had the highest annual increase in dollars, the other for whichever program had the greatest percentage of its alumni giving back to the program. It was an approach that allowed smaller sports programs, such as wrestling, to compete on a level playing field with bigger ones, such as mighty men's lacrosse. All money raised went directly to the sports programs themselves, paying for such things as equipment, uniforms, or assistant coaching needs not covered elsewhere.

While more than half of athletic programs ended up having at least 15 percent of their alumni make donations, the baseball team hit it over the fence to take top honors (and the cash prize) in this category. More than 31 percent of former Blue Jay ballplayers made a donation.

Baseball head coach Bob Babb, A&S '77, who has led the team for more than three decades, was thrilled with the win but admits that the contest was right in his wheelhouse. Keeping his past players engaged and supportive of current activities on the diamond has long been a focus of his. "I have an enormous mailing list that I call Friends of Hopkins Baseball and am constantly sending them updates on the team," he says. "Most baseball players who played here had a wonderful experience and I want to keep them connected, knowing that they are going to want to contribute back to the program to make it even more successful and the experience even better for the current players."

The women's volleyball team started the challenge in a different place. Head coach Matt Troy came on board just a year before the contest started, and one of his main objectives was to build a stronger alumni network for Hopkins volleyball. And the result? The volleyball team had a whopping 867 percent increase in donations during the challenge period, more than enough to take the $5,000 prize. "All athletes are competitive by nature, so I think this challenge was fun for them to compete a little bit while trying to help their programs out," Troy says. "I think it was a great idea."

All told, 19 of 24 individual varsity programs saw their alumni giving grow by 30 percent or more during the Forever a Blue Jay Challenge. More than 2,000 former Blue Jay athletes, parents, and friends made donations, increasing overall giving to athletics by 6 percent for the year. "We saw a huge spike in participation across the board," says Grant Kelly, the Department of Athletics' associate director of development. "We had a lot of alums step up to the plate to make a difference for our student-athletes. Many donors made gifts for the first time because they got motivated by the challenge and wanted their team to win and be recognized. Seeing the dedicated passion behind these donations was truly spectacular."

Oh, and how did Riley's wrestlers fare? Pretty well, actually.

The wrestling team came in second place in the percentage of alumni giving category, with nearly one in four former wrestlers making donations. Their impressive 215 percent increase in annual giving was good enough for third place in that category. Far from taking this close-but-no-cigar finish as a "painful loss," Riley was pleased with the outcome. "I'm proud of how we finished," he says. "It's a terrific reflection on the wrestling team and where its support is headed."

And Riley will have a chance to go back to the mat once again next July when the second Forever a Blue Jay Challenge kicks off. The old uniforms may fray and fade, but not the love.