If reincarnated would come back as: A car mechanic (the old-fashioned, greasy kind)

Trivia: Burke is the oldest player in a Public Health faculty-student basketball game sent to the emergency room with a broken finger.

Wait, do you really have a favorite contaminant? 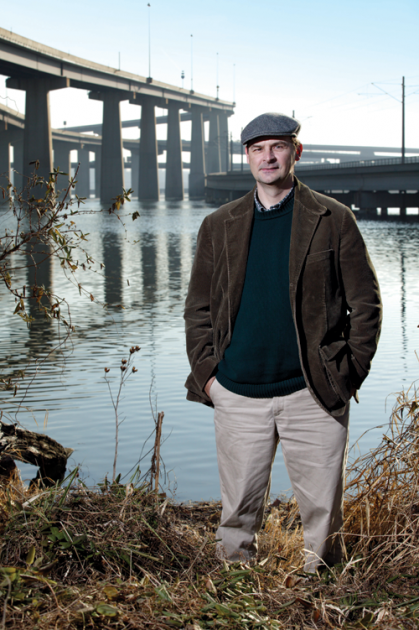 Yes, chromium-6, because it was right out the window of my home in Jersey City, and I can't get away from it. I moved to Baltimore, the other major chromate manufacturing center of the world.

Chromium-6 is a human carcinogen. I grew up in a town with the highest lung cancer rates in the country. Chromium-6 was used in landfills, the foundations for schools. Lots of kids were getting cancer in Jersey City—mostly leukemia and brain cancer. My earliest epidemiology was being an altar boy. When you serve funerals you know who's dying. My town was full of old ladies but no old men. The men died young from hard living and dangerous jobs.

And back then everybody smoked.

Yes, they all smoked. Many of them worked in the chrome plants. My father was a postal clerk. He got lung cancer when I was a junior in college. He died just as I was about to start a master's in public health program at the University of Texas. I deferred a semester and started in January. My mentor was [Reuel A.] "Stony" Stallones, dean of Texas Public Health, who drove a '65 Mustang convertible and chain-smoked during class. He was kind of a cross between Steve McQueen and Lee Marvin, and a great epidemiologist.

So if you were a doctor, you might say your patient was the state of New Jersey?

That's right, for 13 years. In 1975 the National Cancer Institute released the first county-level statistics on cancer, with maps showing very high cancer rates in New Jersey. New Jersey was just starting a program in cancer and the environment, and I got to lead a program on toxic substances and do the first studies on population exposures.

People are always worried about chemicals in the environment. Should they be?

Basically, risk is all about understanding hazards and managing them. You never get rid of them totally. Take fluoridation. It's one of the 10 greatest achievements in public health in the last century, but fluoride has its downside. Too much is bad, but too little is bad, too. Or take chlorination, truly the greatest advance in public health. People don't realize that if we turned off the chlorinator in Baltimore we would all, well, we'd be going to the bathroom a lot. It would be very, very ugly.

Your primary focus is water and sludge?

I work on pretty much everything. I work on the chemical side of things, but I've also worked on infectious disease outbreaks, on salmonella in eggs, on poop in the water in Jersey beaches, on the floods in New Orleans, the dust from the World Trade Center, on occupational health, on the formaldehyde in the trailers after Katrina. . . . It's been an amazing variety, and great case studies for my classes. I even won four Golden Apples and the Stebbins Medal, the school's highest honor for teachers.

What's the riskiest thing you do?

I am risk averse. Probably the most dangerous thing I've ever done was driving in India and the Himalayas. They don't have brakes there. You learn all kinds of tricks when you travel in some countries. You learn to spit when you're taking a shower. The best thing is to eat deep-fried foods, but then you have to worry about the hands of the person who's handing it to you.

How did you come to be an accordion player?

My teacher was Mr. [Louis] Del Monte, a famous accordion player who was on The Lawrence Welk Show. Everyone at my school took lessons, for a dollar a week. But after the Beatles came on the scene, the accordion went by the wayside. I always loved my squeeze-box, but I hadn't played in years until I had a student who was not finishing her dissertation and I made a vow that I would play "Lady of Spain" after her defense. And I did.

Are there any risks to the accordion?

I have accordion elbow.