Allyson Handley, Ed '75 (MEd), '78 (EdD), recalls a crowded San Diego Chamber of Commerce luncheon in 1995. At the time, she was a vice president at National University. "I'm networking, and all of a sudden I hear this voice, 'Allyson, Allyson,'" says Handley. "I turned around and there was Trish." 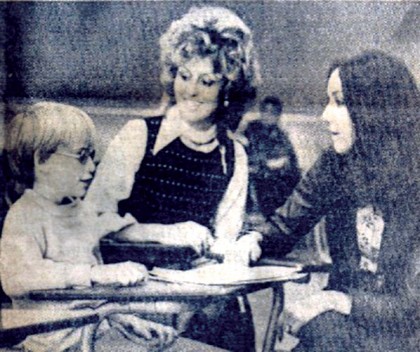 Image caption: Allyson Handley and Patricia Benesh team-teaching in 1976, as reported in the Baltimore News-American.

Trish is Patricia Benesh, Ed '75 (Cert), '77 (EdD). She and Handley co-taught a course for teachers at Johns Hopkins in the 1970s when both were candidates in the fledgling Doctor of Education program. In fact, Benesh was the first person to earn a doctorate of education from Johns Hopkins, in 1977; Handley became the second a year later. After graduate school, they lost touch for nearly two decades. Benesh ended up in San Diego, working as a writing coach with her own business, AuthorAssist. Handley now lives on the other side of the country — she is president of the University of Maine at Augusta (UMA). Since reconnecting, Benesh and Handley talk by phone weekly, frequently reflecting on their teachingdays at Hopkins. We "never really choreographed anything, but just fed off one another during class," says Benesh of their team-teaching effort, a graduate-level practicum for teachers working with low-performing students from urban Baltimore schools. Under Benesh's and Handley's tutelage, the teachers would assess their students and develop and implement a remediation plan.

Benesh and Handley both say their careers post-Johns Hopkins reflect that emphasis on community involvement they experienced in their doctoral studies. "Have her tell you about her work," instructs Handley in an email extolling Benesh's board membership on Just in Time, a San Diego-based program that supports foster children transitioning to higher education and adulthood. In June, Benesh proudly watched one of her prot&eacute;g&eacute;s graduate from UCLA. She works to ensure that the nonprofit combines rigorous program evaluation with the caring of community involve- ment. "That's all from the Hopkins model," Benesh says.

And Handley is active in efforts to reinvigorate downtown Augusta, which has been emptied out by sprawl. When a developer offered to donate the downtown Gannett Building to UMA, she had qualms. The five-story brick structure was built in 1875 and needed a lot of work. As she agonized over the decision, Benesh heard her out, recalling Handley's desire to make the community a better place. Resolved, the deal was done and Handley and the university trustees accepted the building, which has been renovated and now houses much of the university's art and architecture programs. Last summer, when Benesh visited Handley in Maine, they toured the building together. That's what friends do.