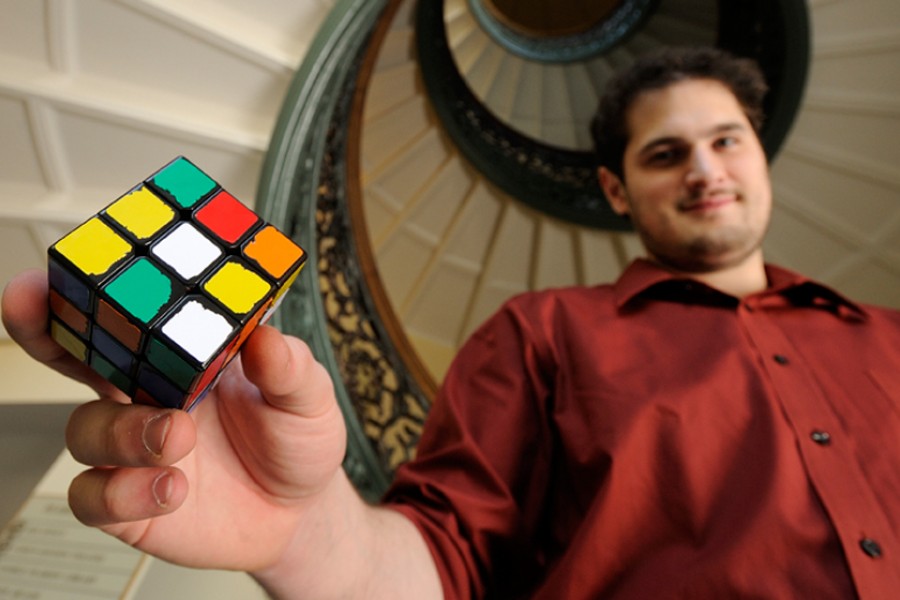 Image caption: Dan Cohen, a master's candidate at Peabody, can solve a Rubik's Cube with remarkable speed. He can even do it with his feet.

To watch Dan Cohen solve a Rubik's Cube is a wondrous thing. He examines it first, noting how it is set among the 43 quintillion possible opening configurations. In two or three seconds he plans a first sequence of turns that will create a single-color cross on one of the cube's multicolored faces. Then, blindingly fast, his fingers begin to spin sections of the puzzle. He gets the cross, then a solid yellow side. He solves corners and edges. The cube clicks like castanets until suddenly Cohen is done. The solution usually takes him 15 seconds or less. The 22-year-old Peabody Conservatory master's candidate in audio sciences currently ranks in the top 10 in several categories among competitive cubers, as certified by the World Cube Association. He is the reigning world champion at Square-1, a variation of the original puzzle.

For those few who've never seen one: The standard Rubik's Cube, in competition called a "3x3," is a clever, fiendish device, devised by a Hungarian architect as a cube, with each of its six faces composed of nine pieces arranged in three rows and three columns, attached in such a way as to rotate through several planes of movement and display one of six colors. You solve the puzzle by twisting the rows and columns on their axes until each face of the cube is a uniform color. Feliks Zemdegs, currently atop the world rankings, once solved a 3x3 in 5.66 seconds. Cohen has done it in 7.28. He's done it in 13.44 seconds with one hand, in 1:34.6 with his feet.

He holds national records solving the more complicated 4x4 and 5x5 cubes. The latter has about 283 duodecillion permutations—a number that requires 75 decimal places—but Cohen has solved it in 57.44 seconds. He prefers the larger puzzles because they put more of a premium on mental acuity than digital dexterity.

Cohen began competing while in high school and so far has participated in 46 competitions in the United States, Germany, and Thailand. His motivation is no puzzle. "Some of my best friends are from cubing," he says. "I know people from all over. The main reason I went to World's [last year] was to see people I hadn't seen since the last world championship."