Sidney Offit, A&S '50, does not recall precisely where or when he first encountered the late Kurt Vonnegut. "We met so many years ago, all I can remember is that soon after we met we were playing tennis together. We just struck it off as friends. It goes back a long way, probably 35 years." At the time, Offit had not read any of the fiction that would make Vonnegut world famous, Slaughterhouse-Five or Cat's Cradle or Breakfast of Champions. That came later, after the two began going to movies and restaurants and sporting events together, and playing marathon first-to-100-points-wins Ping-Pong matches. 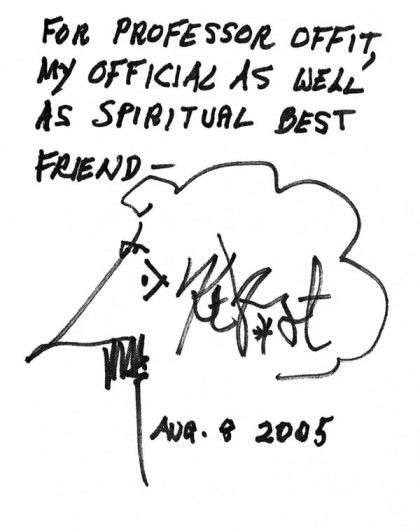 When the Library of America sought an editor for its first volume dedicated to Vonnegut's work, it turned to Offit. His credentials were manifest—author of two novels, 10 books for younger readers, and a pair of memoirs; former editor of Intellectual Digest; curator of the George Polk Awards in journalism. And the man designated (in print, no less) by Vonnegut as his best friend. Kurt Vonnegut: Novels and Stories 1963-1973 is the first of at least two anthologies planned by the nonprofit publisher, which was founded in 1979 to issue definitive editions of the greatest American authors. The first volume, which appeared last year, includes the three novels already mentioned, plus God Bless You, Mr. Rosewater and a trio of short stories, among them the revered "Welcome to the Monkey House."

Over the years of their relationship, Offit came to have profound respect for Vonnegut, both as a writer and person. During the Second World War, when Allied bombers destroyed the German city of Dresden in February 1945, Vonnegut was in the city as a German prisoner. He survived the horrendous firebombing that killed an estimated 135,000 civilians because the Germans had confined him and other captives to the meat locker that supplied the title of Slaughterhouse-Five. Says Offit, "One of the subtle aspects of Kurt that not everybody picked up was the fact that he emerged from that traumatizing bombing with the capacity to write and express himself. That's a real tribute to character."

Vonnegut's genius as a writer, in Offit's opinion, was writing books that were profound yet accessible. Offit says this trait of his friend's work was hard-won. "He had a great wit. But he worked. I have seen his work spaces and I know that he labored on the page. I think it's not an exaggeration to say that when Kurt Vonnegut submitted a work, it was done. All of his energy, thought, intelligence, and critical facility had gone into it. There was an originality of style, but heworked for it. And when the work was done, there wasn't much there that an editor could ask him to revise." Which was good, Offit adds, because Vonnegut would not abide much editing.

Working on the Library of America edition, says Offit, "has been very powerful. The painful aspect of this, for me, is that he was a wonderful friend who was part of my life, and one of the ways we deal with people whom we love when they die is we have a certain sense of denial, so we can go on. When we talk about them after they're gone, I don't think it's cathartic, there's something painful about it. When this book was published, there were so many interviews with me and discussions, I would feel the grief all over again."

In his later years, Vonnegut frequently observed that he was old and tired and would no longer be writing much of anything. Yet the work kept coming, nearly until his death. Offit recalls, "He said a line to me that haunts me. I'm 83 now and I think about it every day. He'd say, 'We live too long. We've raised our families, we've written our books. Don't be greedy.'"