Pulling an all-nighter at the Milton S. Eisenhower Library 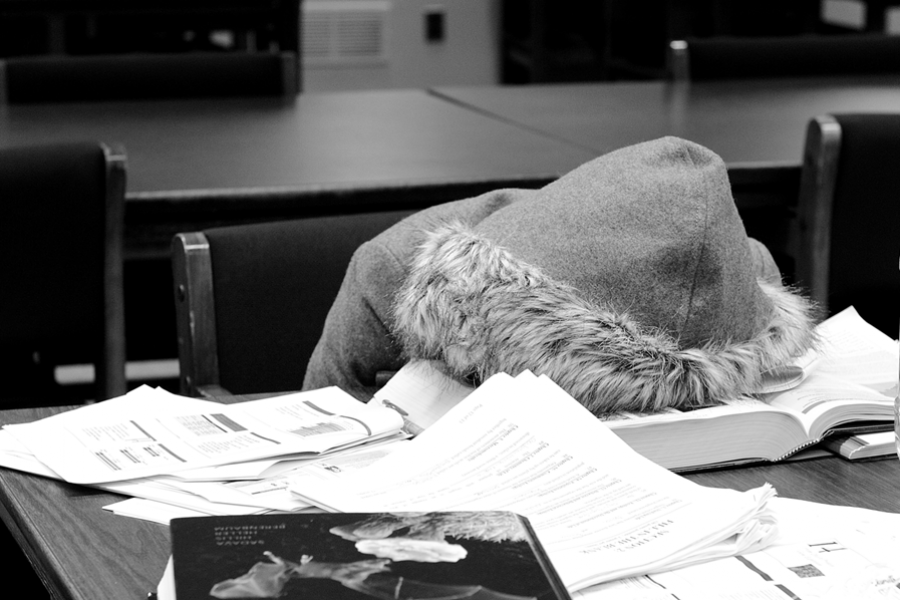 During the wee hours at the Milton S. Eisenhower Library, reality starts to get a little fuzzy. Most of the building is subterranean, and the persistent artificial lighting creates that limbo mood of an overnight transatlantic flight. Your body is calibrated to one time zone, you'll be landing in another one a handful of hours ahead, and while en route time enters a fugue state. At midnight the MSE's late staff clocks out. All exit doors are locked except the M-Level set facing Charles Street. All who remain in the building are students, custodial staff, and security guards—and books, about 1 million of the library's 3.7 million total. The captain has turned off the "Fasten Seat Belt" sign, please feel free to move about the cabin.

Move about I did—if only to stay awake. I had been at the library for roughly 16 hours, and I was starting to feel a little punchy. I had come to the MSE to spend 24 hours during the reading period before finals. The magazine staff thought it'd be enlightening to see what it's like for students at semester crunch time, and having done this before, I volunteered for the assignment.

During the academic year, the library's upper two levels, Q and M, are always open; during finals, all six floors are available around the clock. Come the graveyard hours between 2:30 a.m. and sunrise, the social energy level and student population aren't as active as during the day, but the studying continues. The few conversations I had with students were brief and perfunctory. They were there for a reason, and it wasn't to talk to me.

I understand that mindset. I entered Johns Hopkins as a freshman in 1988. Back then, the MSE closed at midnight, while the Hut—the Hutzler Reading Room located on the second floor of Gilman Hall—was open 24 hours. Friends and I would sit on the Gilman steps, smoking cigarettes and watching the migration from the MSE across the quad to the Hut. We—and I'm quite sure we didn't coin it—called it the Hut 500.

When Gilman Hall was shut down for renovations in 2008, the Eisenhower Library's top two floors became the 24-hour study areas. When Gilman reopened in 2010, the MSE remained the overnight spot because of its greater seating capacity. Now the Hut closes at midnight. I imagine the Hut 500 continues, only in a different direction.

Both are open 24 hours during reading/finals periods, but I wanted to spend time at the MSE. It was the first library that I came to know very well, even if we've both changed a bit in the intervening years. Unsurprisingly, pulling an all-nighter was much easier when I was 20. And when the going got tough, I did what I saw a number of students doing: I paced.

The building has six floors, which start at ground level and go down. The upper two floors, M and Q, tend to be more relaxed and social, and as I made my way through, people there chatted lightly. The next two floors, A and B, house more specialized collections and student study areas; here I observed only a modest degree of socialization. I decided to camp out on D-Level, the deepest region of the building where the humanities stacks are located. I headed there around 5 p.m. to claim a carrel. Most of the carrels were occupied; all obeyed the "quiet" part of the study area with the respect of Trappist monks. The only sounds that traveled through the air were the windy whoosh of the building's heating and air system, the babbling- brook rustle of fingers tapping laptop keys, the occasional ribbit of a vibrating phone sitting on a hard wooden desktop.

C-Level—well, I was going to leave C-Level alone. C-Level is where the MSE's science, engineering, and medical texts and resources are located. It's where I presume a number of science, engineering, and premed undergraduates study. I say "presume" only because I wasn't going to ask them. I took organic chemistry as an undergrad. I remember my classmates spreading out through the Remsen 1 lecture hall to take a midterm. When it came time to close our blue books—are blue books still used?—some students burst into tears because they'd only completed half the problems. I remember that look, of shock wrestling with determination, that gets branded on the faces of young people after receiving, for the first time ever, a 29 on a test. Getting punched in the throat would be less alarming. You do not walk up to that student and say, Hello, I'm doing an article about blah-blahblah. You stay out of the way.

But popping briefly onto C-Level began to mingle my early 1990s studying memories with everything I saw now. Sure, some of the particulars about the library and student body had changed—for instance, the undergraduate population was much smaller when I matriculated, and back then, the library kept pencils and scraps of paper by the digital card catalog for jotting down call numbers; now you can text them to yourself. But the overall mood and look of the activity were very similar. It made me realize that the demands of undergraduate life don't change all that much despite new technology and buildings and services and whatever that accompany university life today. At some point, you just have to do the work.

And there's a strange mix of pride and acceptance that comes with that moment when you realize that you're 20 years old and you're regularly spending your weekend nights in college hitting the books and joking with peers in the library. That feeling might just be articulated a little differently over the years. In 1991 I would've wrapped it up in self-deprecation that didn't mask an arrogant streak of unearned superiority. Standing in C-Level in the wee hours of the morning, I'm picturing the twitpic I'd make if I could at all focus my eyes on my phone's touchscreen. Image: young students sitting at MSE desks. Male, female, who knows—all you really see are the tops of heads bent over books and screens. Open book bags cough up puddles of printed materials and empty energy drink cans. A clock reads 4:30 a.m. Across the top of the photo, in Garamond Condensed typeface, it would read "Johns Hopkins"; at the bottom, in deadpan all caps, "#WINNING."

Which is not to imply that the pressure doesn't sometimes get to the students. John Schweitzer has worked evenings and weekends in the MSE's Support Services Department for the past five and a half years, and he notes that Johns Hopkins students are on the whole pretty studious but that during finals period each semester, well, everybody gets a little more intense. "Not only is it much more crowded, but kids will look like some of them haven't showered in three days," he says. "There's a lot more obvious exhaustion. Sporadically you'll see a student sleeping, but during finals period? Scores will be."

At 5:30 a.m. I would have given a kidney to come across surprise candy.

Students entering the library during my visit are dressed for comfort and prepared for a long haul. Blankets hang out of book bags. Hands grip portable coffee mugs and water bottles. Cords to headphones and earbuds dangle from purses and bags. Yes, I think that is a pillow strapped to that young man's backpack.

Schweitzer has seen students deal with the pressure in creative ways. Pacing, of course, is evergreen. But he's also seen a guy juggling to pass the time. And nothing quite compared to the young man with a pair of Powerstriders strapped to his feet. "He was running down the D-Level main aisle with this thing, it looks like two shock absorbers," Schweitzer says. "And the ceiling? His head was getting very close. He was going full blast. I caught him on the return trip to get him to stop. But he was excited. It was the end of exams."

Andrew Shuping, a librarian and assistant professor at Mercer University in Georgia, previously held the same night and weekend position as Schweitzer. He recalls students coming to the library with sleeping bags and toothbrushes. "They'd find a spot to camp out in and set up and stay there as long as they could," he writes via email. "Then they'd leave their stuff behind, go take the exam, and come back and start the process over again."

Behavior only occasionally gets rambunctious. Shuping vaguely recalls somebody trying to cook in the stairwell, and Schweitzer found somebody brewing tea using an electric kettle at a desk; both occasionally found empty beer cans left behind after finals. Students are constantly trying to sneak food into the library. (Liquids in covered containers are permitted, but food isn't.) Students often creatively find ways around the ban. Schweitzer once found pieces of wrapped candy taped to the inside walls of carrels throughout the building with typed notes that read, "Enjoy, the end is almost here."

At 5:30 a.m. I would have given a kidney to come across surprise candy. Even pacing becomes somnolent after a while, and at one point I stepped into a men's room just to splash water on my face. A young man was in there doing the same thing, and as I leaned over the sink he turned to me and asked, quite innocently, "Is it Monday?" I replied with a simple, "No," which seemed to be enough. He nodded and exited.

As dawn approached, I somewhat understood how he felt. According to my phone, the sun would rise at about 7:15 on Sunday morning. And that's when I planned to leave D-Level, just for a moment. I packed up my stuff, wrapped myself in a sweater and coat, and headed outside. I needed to see sunlight. I needed to reset my internal clock.

A coffee and vending machine "breakfast" later, I was back on D-Level, same carrel I claimed Saturday afternoon. I wasn't the only creature of habit. A student I had seen Saturday night returned, taking the same seat he had the day before. He had changed clothes. Bet he slept, too.

He sat down, took out some books, opened up his laptop, pulled a folder out of his backpack, removed his shoes, and started working. At that moment, such nonchalant studiousness looked oddly impressive—even though when I was a student doing it, it felt like common sense.

As the morning progressed, more students streamed in. Three or four took over the group study room off to one side of the quiet study area. Open desks filled up. The smell of coffee wafted over from a few carrels down the way. Keyboard clicking and vibrating cellphones again cut through the circulation system's hum. Quiet conversations generated a welcome low murmur of background noise. All these signs of student life returned, and the MSE study flight prepared for takeoff once again.