In the mood for drugs, simply because they're near us?

Americans are popping more pills—many more pills—to improve their moods and deal with the daily stress of life. Thanks largely to general practitioners who now write prescriptions for Prozac and other nerve-soothing drugs at double the rate they did 15 years ago, more than one in 10 people in the United States takes antidepressants. "Americans have a very positive attitude toward these drugs," says Ramin Mojtabai, an associate professor of mental health at the Bloomberg School of Public Health and of psychiatry at the School of Medicine. He has studied the issue since 2008. "They've begun to seek antidepressants out even when they have no psychiatric issues." 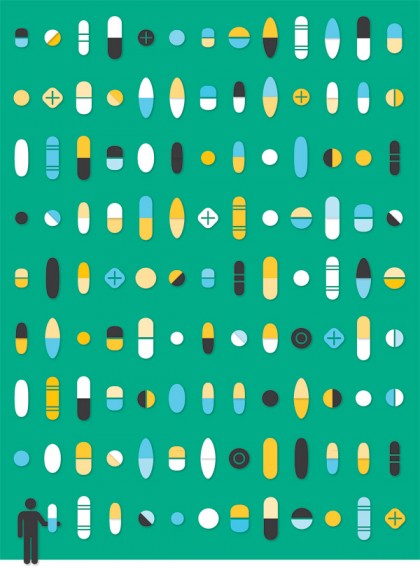 Mojtabai, other mental health experts, and the federal government have decided to find out why so many prescriptions for mood-altering drugs are being written, and whether many people are being medicated unnecessarily. Mojtabai's research, published in the August 2011 issue of Health Affairs, has shown that four of every five prescriptions for antidepressants are now written by non-psychiatrists, raising the question of whether medical professionals have been adequately trained to make psychiatric diagnoses and prescribe drugs for them.

Pharmaceutical companies sell more than $10 billion in mood drugs every year in the United States alone. Drug manufacturers spend $100 million-plus per year to persuade doctors and patients that such drugs are safe and effective. Although the drugs may make people feel a bit better about their lives, their necessity is still debatable in many cases, Mojtabai says. "We know that antidepressants help about 50 percent of patients—that is to say they respond to them positively," he says. "But we know that many people respond positively to a placebo as well. How much of what we're seeing is the effect of the antidepressant and how much is the placebo effect?"

Physicians feel comfortable prescribing antidepressants because they cause mild, if any, immediate side effects, and their patients often say they feel better when taking them. But some longer-term problems related to antidepressant use are starting to emerge. For example, early findings hint that women run a greater risk of bearing an autistic child if they take certain types of antidepressants while pregnant. Other new studies have observed a correlation between long-term use of some mood drugs and diabetes. What's more, those who have taken the drugs for a long time and then wean themselves off of them often suffer from a rebound effect—more anxiety and depression.

"People want quick fixes. It's much easier to take a pill than to change your lifestyle. We think we should be happy all the time," Mojtabai says. "People might not be as amenable to working out their problems as they are to taking a pill." Insurance coverage, or a lack of it, could also be an issue. Psychiatric treatment can often be more expensive, and is less often reimbursed by insurance companies, than visiting a general practitioner. Plus, many people still feel stigmatized about seeking psychiatric counseling, Mojtabai adds.

He suggests that health systems and governments offer training to non-psychiatrists on how to spot mental health conditions more precisely. They should also consider adopting screening measures physicians could use to diagnose mood disorders. Mojtabai says that in the United Kingdom, where antidepressant use has plateaued in recent years, screening "may have functioned as a brake on the use of these drugs." He adds that government-run British single-payer health system, which oversees nearly all medical doctors there, makes it easier to reform its overall diagnostic practices.

Performing such a turnaround in the United States may prove much more difficult, he adds. The American Medical Association, which represents psychiatrists as well as other physicians, does not have a policy regarding which type of physician is better equipped to prescribe antidepressants. The AMA also hasn't taken a position on how primary caregivers can best treat people with anxiety and depression. Meanwhile, enticements from drug companies and pressure from patients seeking relief from stress encourage physicians to pull out their Rx pads and write. "This is a trend that shows no signs of slowing down," Mojtabai says.

The irony, he says, is that "almost half of all people with major depression who go to see their doctors are not diagnosed—that's the flip side of this. On the one hand, we have this possibly overtreated group. And on the other, there's a group of people who really needs help and isn't getting it."