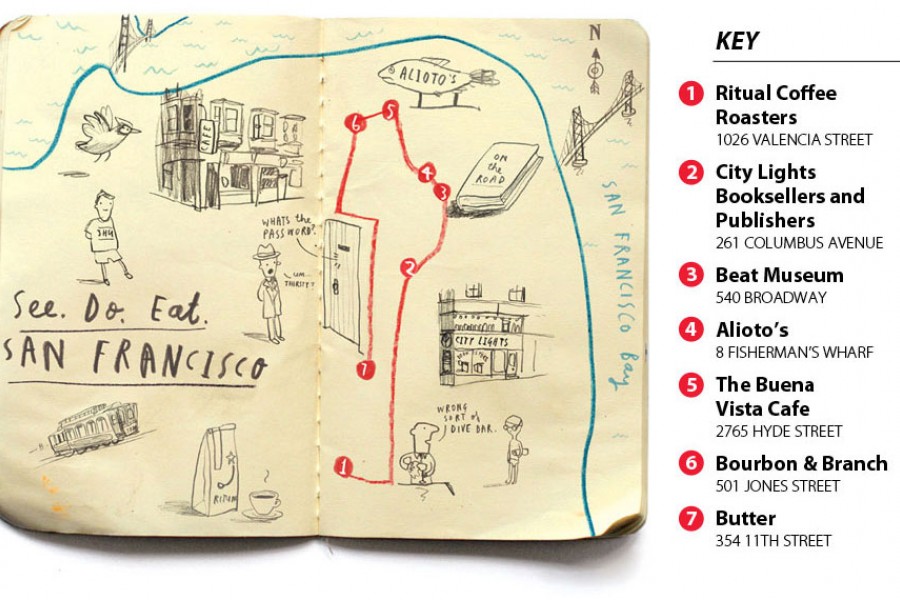 Finding a blue crab doused in Old Bay on the West Coast is a nearly impossible feat—unless you're at the San Francisco Alumni Chapter's annual crab feast. But fortunately for East Coasters who may find themselves transplanted to the West, San Francisco's got its own version: Dungeness crabs, a breed comparable in size and local popularity to our own blue, though served unseasoned with drawn butter and often with a glass of a Napa Valley red.

It's that familiar sense of place—and the traditions that come with it—that can make Johns Hopkins alumni feel at home in San Francisco, says Neil Shea, A&S '85, president of the 4,000-member San Francisco Alumni Chapter for the past four years. In the first of a series showcasing Johns Hopkins alumni chapters around the world, we asked members of the San Francisco chapter to recommend a few favorite spots in "Everybody's Favorite City."

Our Blue Jays insider's guide to San Francisco starts with a cup of morning joe at Ritual Coffee Roasters (1) in the city's Mission District, a caf&eacute; and small-batch roaster specializing in single-plantation bean sourcing that can even show you pictures of the farmers who grow their beans. Head north to City Lights Booksellers and Publishers (2), the city's literary meeting place (and home of the avant-garde) since 1953 and plan to spend some time browsing three floors of bookish bohemia. Next up (and almost next door): the Beat Museum (3), the North Beach neighborhood paean to the coolest generation, daddy-o. Afterward, sit down at Alioto's (4) for that Dungeness, then visit the Buena Vista Cafe (5) for an Irish coffee at the bar where it was first invented. If you're looking for a blind pig, Stephen Peroutka, Med '79, '80 (PhD), advises a visit to Bourbon & Branch (6), a speakeasy that's a favorite spot of his. "You have to go on the Internet to get a password," he says, "and you bang on the door twice and a girl opens the door and you give her the password. All walls, no windows—it makes you feel like you're with the criminals from the 1930s." After all that, plan to finish the night back at Butter (7), the SoMa neighborhood hot spot that specializes in cholesterol-defying treats like deep-fried Twinkies and Frito pies.