In the early 1990s, the Baltimore Gas and Electric Company looked for help dealing with volatile organic compounds and polycyclic aromatic hydrocarbons that contaminated the 72-acre hub of its gas distribution business in Baltimore City, a site not far from the Ravens' football stadium. BGE wanted to know if the pollutants—byproducts of manufacturing activities dating back to 1855—were spreading beyond the site. The company turned to Department of Geography and Environmental Engineering professor Ed Bouwer, an internationally recognized expert in water and soil pollution treatment, to determine what should be done. Unknowingly, they also opened a unique career path for a brand new graduate student, Neal Durant, Engr '93 (MSE), '99 (PhD), who has since gone on to advise businesses and governments around the world on the management and remediation of environmental liabilities. 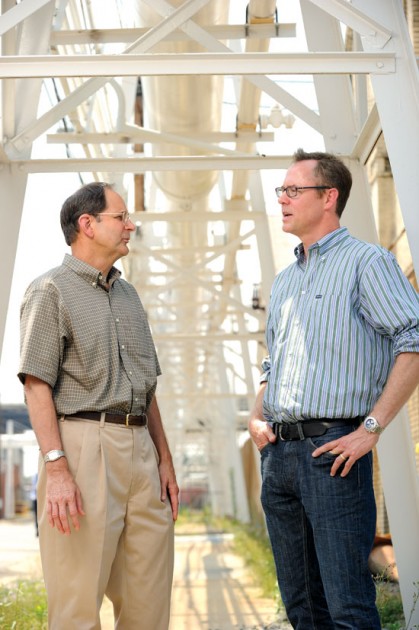 We reunited professor Bouwer and his former student on the site of their work together to discuss the current state of the art in removing man-made contaminants from groundwater.

Neal I came to Hopkins seeking to get a master's, but as soon as I got to Hopkins, Ed landed this terrific research grant.

Ed A lot of times you do research in the lab, so when this project came along it was a great opportunity. We were able to do this exciting project and go out in the field. Students really like that.

N At the time, bioremediation was a big up-and-coming area. The cleanup of the oil spill in Alaska [of the Exxon Valdez in 1989] was using bacteria to clean up the oil and it was getting a lot of press. Ed was recognized as a leader. I was in the right place at the right time, and when Ed offered I did not hesitate.

E Part of this work is you have to solve the mystery. You don't know the complete history of the site, you don't know where things are, or what's down there. So you drill holes and you take samples and you try to figure it out. It's turned out to be much more difficult to remediate—even to identify—all these sites than originally thought. The federal government alone has hundreds of billions of dollars in liabilities in sites that need to be cleaned up. There are thousands of sites like these all around the world. They're very common.

N Getting contaminants in the ground is easy; getting them out is much harder. In the U.S. we get about 20 to 30 percent of our drinking water from the ground. But in a country like Denmark, where 90 percent of the drinking water is groundwater, the issue is much more critical. These countries—like Denmark and the Netherlands—have been very proactive about figuring out how to protect their water supply.

E Our research project for BGE was engaged in very basic, very fundamental work. This is an evolving science. At this point, basically, we've dealt with the low-hanging fruit—the easy sites, the ones that are very localized, or stuff that's so degradable that it doesn't go very far.

N The old approach was basically "dig and haul"—dig up all the contaminants and haul them away. We were much more brute force in our approach to these problems. Now we've gotten smarter, we hope, in how we respond. What our research focused on was low-cost, in situ methods of remediation. Instead of pumping things out of the ground and treating it above ground, you keep it in place and treat it there using natural agents like bacteria that have the ability to break down the contaminants. In many cases this approach is more sustainable and more cost-effective.

E The driver for all this is the water supply. As the population grows, we sometimes have to turn to water of poorer quality. So, if all these chemicals end up in the water, we have to be aware and know what to do with them.

N Uncertainty is a huge driver in what we do in terms of environmental restoration—and understanding where these chemicals go once they're released. Maybe they're released into surface water or they're released into groundwater, but in either case there's a lot of uncertainty. As engineers and hydrogeologists, we can apply our very best models and spend a lot of time and money trying to come up with an accurate mathematical prediction of where things will go, but it's inexact and it's an approximation and sometimes we get it just right and other times we fail to make accurate predictions. We don't understand the geologic systems all that well and that's why we don't always make the best predictions of what will happen, and that's also why we're still trying to clean these sites up after all these years.