Robert G. Roush, Engr '43, '48 (MSE), writes that he and his wife, Jane, moved to the Edenwald Retirement Community in Towson, Maryland, in 2008. He would appreciate hearing from fellow alumni and former associates from his campus days.

Denton A. Cooley, Med '44, the surgeon who is credited with performing the first successful heart transplant and founder of the Texas Heart Institute, has published 100,000 Hearts: A Surgeon's Memoir (University of Texas Press, 2012). 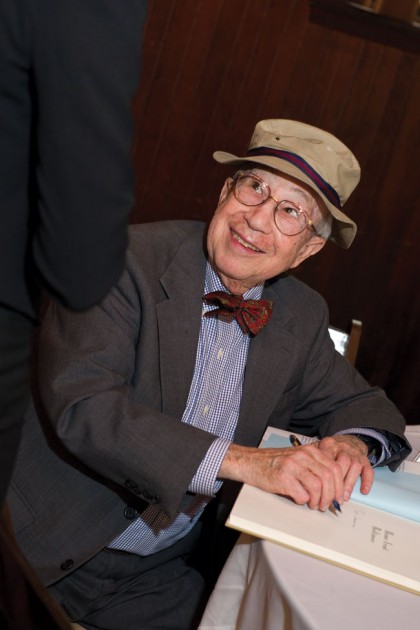 Image caption:Telling Baltimore's Stories "Becoming a writer was my wife's idea," says Gil Sandler, A&S '67 (MLA). Newly married in 1952, Joan Sandler pulled out the trove of letters Gil had written to her in college and told him, "You really need to take this (writing) seriously." He did. While founding and running an advertising and public relations agency, Sandler began contributing to newspapers and since then has written thousands of essays, columns, and feature articles as well as five books, including his most recent, Home Front Baltimore: An Album of Stories from World War II (Johns Hopkins University Press, 2011). His fond and intimate portraits of everyday life in Baltimore have earned him a devoted audience, which has followed him from newspapers to radio. These days, he is telling "Baltimore Stories" on the local NPR affiliate, WYPR. JAMES HUNT

Joshua Grossman, A&S '61, tutors and mentors international medical graduates for the final test of the three-part United States Medical Licensing Examination. Grossman has published several book reviews and appeared in the Jonesborough Repertory Theatre production of Our Town in May 2011.

Michael R. Bloomberg, Engr '64, contributed a photo of fellow classmate Charles "Chuck" Aronhalt Jr., Engr '64 (who was killed in action in Vietnam in 1967), to the Vietnam Veterans Memorial Fund's Call for Photos initiative in October 2011. The initiative is a continuing effort to collect photographs for all of the 58,272 men and women whose names are inscribed on the Vietnam Veterans Memorial Wall.

John R. Stone, Med '67, HS '69, is a professor at the Center for Health Policy and Ethics at Creighton University School of Medicine in Nebraska.

Jerry R. Schubel, A&S '68 (PhD), is president and CEO of the Aquarium of the Pacific in Los Angeles.

Nicholas B. Binkley, SAIS '71, co-produced Rockin' the Kremlin, a documentary about American rock 'n' roll's contribution to the fall of Soviet communism. The film is scheduled to premiere in Los Angeles in April.

David Lance Clark, A&S '71, director of the Civil Affairs Division for the United Nations Mission in Sudan, has moved from Khartoum to South Sudan.

Edward T. Dougherty Jr., A&S '71, a dentist in Ocean City, Maryland, who is certified in oral sedation, was appointed by the Maryland State Dental Board of Examiners to evaluate doctors and offices in Maryland seeking to obtain class IV sedation permits.

Andrew P. Feinberg, A&S '73, Med '76, '83 (PGF), SPH '81, a professor at the Johns Hopkins University School of Medicine, was one of 13 winners of the 2011 National Institutes of Health Director's Pioneer Award for his research in the field of epigenetics.

Jeff Greene, A&S '75, a real estate investor who was a Democratic candidate in Florida for a U.S. Senate seat, went undercover to chronicle the Occupy Wall Street movement for Forbes magazine in October 2011. Greene also appeared on the Fox News program Your World with Neil Cavuto to discuss his visit.

Kristin H. R. Franceschi, A&S '81, a partner at DLA Piper's Baltimore Office, has been elected president of the National Association of Bond Lawyers for 2011-2012.

Robert Balfanz, A&S '84, is co-director of the Everyone Graduates Center, a research group at Johns Hopkins University that studies why high school students drop out in order to help students stay on a path toward graduation. Visit every1graduates.org to learn more.

Joseph J. Marotta, Med '84, a practicing orthopedic surgeon in Albany, New York, is co-founder of Medicus Christi, a nonprofit organization that brings modern medical care to underserved regions in Africa. Marotta recently met with Pope Benedict XVI and a number of councils at the Vatican to explain the program and ask for their support.

Lawrence J. Quinn, A&S '85, and Stanley S. Fine, A&S '85, both Baltimore attorneys, are on the board of directors for Charm City Youth Lacrosse, a competitive lacrosse league for Baltimore inner-city youth.

Alison M. von Klemperer, SAIS Bol '86 (Dipl), SAIS '89, received the 2011 Award for Extraordinary Service from the Institute of International Education's Scholar Rescue Fund in September 2011 for her work with refugees who came to study in the United States.

Gordon Jonathan Lewis, A&S '86, '86 (MA), was appointed UNICEF's country director in El Salvador after working in Bolivia for four years. His eldest daughter was married in Portugal last summer, and his youngest daughter began her freshman year at the University of California, Berkeley.

Amir Pasic, SAIS '87, was appointed vice president for international operations at the Council for Advancement and Support of Education, effective December 5, 2011.

Jeanine M. Worden, Bus '87 (MAS), was appointed associate general counsel for the Office of Fair Housing and Equal Opportunity in the U.S. Department of Housing and Urban Development in August 2011. 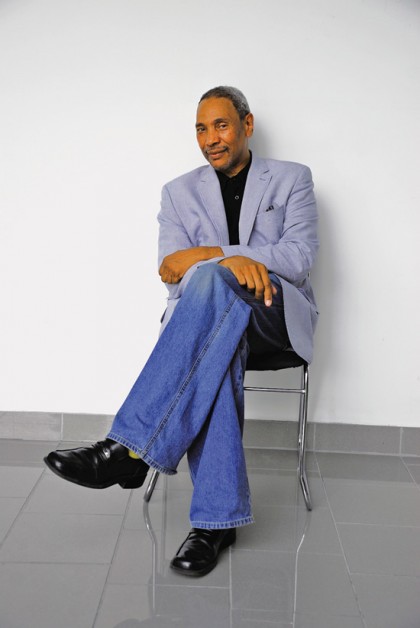 Image caption:The Museum of the Future Even before its official opening in February, the Houston Museum of African American Culture had raised eyebrows and drawn attention for innovative free programming, such as slam poetry champion Marc Bamuthi Joseph's multimedia presentation on green economics and black psychology. "Our goal is to create the museum of the future," says CEO John Guess Jr., A&S '71, SAIS Bol '76 (Dipl), SAIS '76. For Guess, this means becoming "a community, not just an organization in search of an audience," a goal he has worked to achieve by developing ties to local and national organizations, such as Johns Hopkins' Center for Africana Studies, and welcoming neighborhood groups to use the building Guess acquired shortly after taking the reins of the museum in 2009. His goal is nothing less than to create an institution "unafraid of developing and presenting a conversation about people of color that is fresh as well as historical, that is national and global as well as local." JAMES HUNT

Jill Goldsmith, SAIS Bol '89 (Dipl), is based in New York and returned to Variety as business editor in October 2011. Goldsmith had previously worked for the publication from 1999 to 2007.

James M. Timmerman, A&S '90, is a partner in the litigation department of Tydings & Rosenberg LLP, a Maryland law firm.

Daniel C. Ziskin, A&S '90 (MA), '94 (PhD), a scientist and environmental activist, ran for his first term on the Boulder, Colorado, City Council in November 2011 but was not elected.

Kerri Hren Bertolini, A&S '93, earned her first-degree black belt in tae kwon do in October 2011, while her 10-year-old son, Joey, earned his junior black belt. Bertolini continues to work as director of business operations for Siemens Healthcare and writes that she visited a Johns Hopkins career fair in September 2011.

Alvin D. Blake, SAIS '96, has retired after 32 years of federal service, 28 of which he spent with the U.S. Department of Commerce as an industry economist. He received the Bronze Star Medal for his contributions to the Bureau of Economic Affairs I-O Capital Flow Tables.

Ilise L. Feitshans, SPH '96, is a visiting scientist at the University of Lausanne's Institute for Work and Health in Switzerland.

Thomas A. Liebel, A&S '98 (MLA), was selected for a fellowship in the inaugural class of LEED Fellows by the Green Building Certification Institute in September 2011.

Victor E. Velculescu, Med '99, '02 (PGF), A&S '99 (PhD), an associate professor of oncology at the Johns Hopkins Kimmel Cancer Center, was one of three scientists to receive the Paul Marks Prize for Cancer Research in September 2011. The award is presented biennially by Memorial Sloan-Kettering to honor promising scientists under the age of 46.

Zack Friedman, A&S '00, was named among the Asia Society's Asia 21 Young Leaders, a group of 150 individuals under the age of 40 who will impact global affairs in coming decades. Friedman represented the United States at the annual Asia 21 Young Leaders Summit in New Delhi held in November 2011.

Bernard G. Jaar, SPH '00 (PGF), '03, Med '02 (PGF), an assistant professor at the Johns Hopkins School of Medicine who holds a joint appointment at the School of Public Health, was appointed chairman of the National Kidney Foundation of Maryland's medical advisory board in October 2011.

Chimamanda N. Adichie, A&S '04 (MFA), was listed by Forbes magazine as one of "The 40 Most Powerful Celebrities in Africa" for the success of her second novel, Half of a Yellow Sun (Knopf, 2006).

Leah Blom Grossi, A&S '04, an associate at the law firm Kramer Levin Naftalis & Frankel LLP, was honored for her immigration work on November 14, 2011, at the Sanctuary for Families' annual Above & Beyond Pro Bono Achievement Awards and Benefit in New York City.

Gyanu Lamichhane, Med '04 (PhD), '05 (PGF), a microbial geneticist, received the NIH Director's New Innovator Award for his research, which revealed a weakness in the tuberculosis bacterium. The award was presented to 49 promising scientists in the early stages of their careers.

Susan McCallum-Smith, A&S '04 (MA), was awarded a 2012 National Endowment for the Arts fellowship in creative writing.

Forsan Hussein, SAIS '05, CEO of the Jerusalem YMCA, gave a presentation at a Holocaust conference in Morocco in the fall of 2011.

Reuben Kraft, Engr '06 (MSE), '08 (PhD), an engineer at the U.S. Army Research Laboratory in Aberdeen, Maryland, was one of 94 researchers presented with a 2011 Presidential Early Career Award for Scientists and Engineers for his research on computational injury biomechanics.

John A. Benedetto, Engr '07, who was paralyzed in a 2009 bodysurfing accident, completed his second New York City Marathon on a handcycle on November 6, 2011.

Abbie Adams Smith, Bus '07 (MBA), an environmental engineer at EA Engineering, Science, and Technology Inc. in Hunt Valley, Maryland, is one of only five national recipients of the American Council of Engineering companies' 2011 Young Professional of the Year award.

Lauren Parris, A&S '08, a graduate of the Seattle University School of Law, joined Hellsell Fetterman LLP as an associate attorney in November 2011.

James D. Cahill, SAIS '09, was selected to be a speechwriter for Gen. Raymond T. Odierno, chief of staff for the U.S. Army.

Chad Pillai, SAIS '09, was selected to be a speechwriter for Gen. Raymond T. Odierno, chief of staff for the U.S. Army.

Curtis E. Miller, Engr '10 (MSE), was hired as a senior project manager at Rettew, a design firm in Pennsylvania, in October 2011.

Patrick W. Stanley, A&S '11, founded the Chicago-based Ellison Sunglasses in 2010, a company that gives a percentage of its profits to the Himalayan Cataract Foundation. Visit www.ellisonsunglasses.com to learn more.

Keaton P. Swett, A&S '11, is a co-founder of Peektree, a website and mobile application that allows users to rate their friends' photos.

So Much Talent, So Little Space

Johns Hopkins alumni authors are prolific. Also funny, insightful, intriguing, engrossing, and above all, talented. We don't have room in four magazine issues to feature them all. From now on, we'll be putting all alumni book publication news in our new online Alumni Authors Bookshelf to provide the space and attention such admirable efforts deserve.

See more titles or find out how to submit your own book to the series at alumni.jhu.edu/bookshelf.