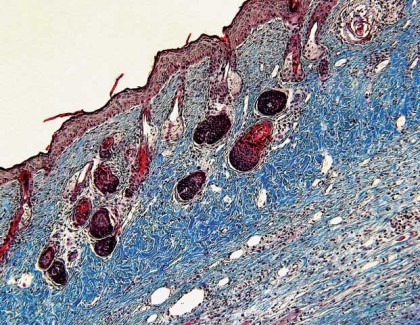 Using mice as subjects, Johns Hopkins scientists have found a way to regrow severely burned skin without the scars and damaged tissue that often serve as painful reminders of injury. A research team led by Sharon Gerecht, assistant professor of chemical and biomolecular engineering at the Whiting School of Engineering, devised a polymer-based gel that, when used with a regular wound dressing, can regenerate skin damaged by third-degree burns more rapidly than conventional treatments and without scarring. "Third-degree burns destroy the dermis, epidermis, and underlying layers of fat," Gerecht explains. "The skin doesn't fully recover. Instead, it becomes scar tissue, which doesn't function as normal tissue does. Due to a lack of blood vessels, oxygen is not delivered to the injured tissue, resulting in the formation of scarred tissue." Gerecht's invention coaxes more blood vessels to grow, along with layers of hair follicles and skin. In the next few years, Gerecht and others will follow up with research on pigs, and then people, to see if the gel might prove useful in treating burn victims. "There's a possibility that it could help diabetics suffering from foot ulcers," she adds. Learn more &raquo;

A team of astrophysicists has uncovered the most distant exploding star, or supernova, ever seen. The remnant of a star that blew up 9 billion years ago, the so-dubbed SN Primo will be used to measure how fast the universe is expanding, and may hold some clues for science as to how dark energy, the force pushing galaxies farther apart, works. Learn more &raquo;

A body of water as voluminous as Earth's Great Lakes has been found inside Europa, an ice-encrusted moon of Jupiter, report scientists at the Applied Physics Laboratory and elsewhere. Such an environment may be suitable for life as we know it. An analysis made by other Johns Hopkins planetary scientists found that if life once existed on Mars, it most likely lived below the planet's surface. Learn more &raquo;

Evolutionary scientists have identified ankle and toe fossils from the earliest North American primate, whose 55.5 million-year-old bones were unearthed in Wyoming. The mammal in question, called Teilhardina, likely weighed no more than four ounces, lived in trees, and resembled a bush baby. Learn more &raquo;

Infants can remember objects that have been removed from their line of sight, even though they don't recall details about them, brain science researchers at Johns Hopkins and Rutgers have found. learn more &raquo;

Johns Hopkins neuroscientists and others have devised a rudimentary way to map the sense of touch, specifically by learning how some patches of skin and touch-sensitive hair that grows from it correspond to columns of nerves in the spinal cord. Learn more &raquo;

Teens who crave a sugar-sweetened drink are more likely to opt instead for water when told dietary facts about soft drinks, such as how many miles of running it might take to use up a bottle's worth of calories, according to Bloomberg School of Public Health researchers. Learn more &raquo;

People who require counseling to help them lose weight do just as well getting support over the phone as they do receiving it in person. Learn more &raquo;

People with lower socioeconomic status are more likely to be overweight than people of higher status, regardless of how aware people on the lower end are of health issues and nutrition. Learn more &raquo;

Inflammation caused by proteins that cause damage to arteries can be countered with normal levels of vitamin D in the blood, but higher amounts of the vitamin may actually be dangerous to the heart. Learn more &raquo;

Monitoring cases of the flu by tracking Internet search traffic on Google and other sites can yield information that will help hospital emergency rooms prepare for an outbreak, say researchers at the School of Medicine. A rise in the number of search queries involving influenza correlates with a higher number of flu patients who seek out ER treatment. Learn more &raquo;

Men who carry a rare mutated gene may be 10 to 20 times more likely to develop prostate cancer than other men. Learn more &raquo;

By manipulating protein functions in yeast, scientists have been able to expand its lifespan. The molecular mechanisms used to make longer-living yeast appear to be related to those involved in human aging, they say. Learn more &raquo;