I'm not super alum-y. I don't own much branded gear and I avoid excessive mentions. I'm terrible about keeping up. Facebook has made it easier, but my undergraduate acquaintanceships thrive mostly in memory. Grad school friendships, coined in the butterfly's life of a creative writing program, are more ephemeral still. 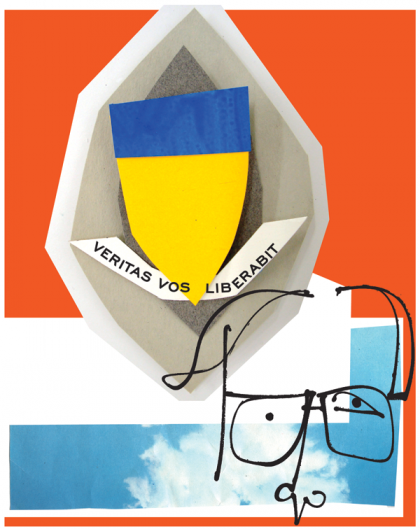 But there is another sort of alum- hood. It's what I call the shared connect. It tends to flow in a certain direction, mainly from a younger grad toward an established alum. Mentorship is the code word. The young reach out; the established on occasion reach back. The nexus is unusually slim — no more than a stiff piece of paper, one, in some cases, half a century old.

One alumnus I met this way was Philip Hamburger, A&S '35. Phil was an early editor of the Black and Blue Jay. He fashioned the magazine after the then new and stylish New Yorker magazine. Upon graduation, he did the natural thing and went to work for the very magazine from which he had gotten his best ideas. Sixty years later, on little more than a shared connect, I was in his office overlooking Bryant Park. Phil reciprocated with a visit to Baltimore. We wandered the campus and looked in at the Hamburger Archives — named for a cousin. Phil turned through the surviving copies of the magazine he had crafted.

Phil introduced me to another Hopkins Guy — someone I "absolutely had to meet." That was Sidney Offit, A&S '50. Among myriad other accomplishments, Sid is the author of the only novel ever to be written, fully and completely, about lacrosse. It's called Cadet Attack (St. Martin's Press, 1964). "To a Hopkins Gentleman," Sid inscribed a copy to me. In other words: to a Hopkins Guy.

Over the years, I stayed in touch with Sid, and Phil and I traded letters back and forth until he died. We were friends. Which is to admit: Some of my fondest acquaintances over the years have been, well, alums. They were guys I knew simply because I, too, was a Hopkins Guy.

I went to New York for Phil's memorial. Naively, I had imagined that it would be a Hopkins thing. Instead, it was a chapter meeting of the New York literati. I slipped out when the reception began. On the landing I ran into Sid, who, naturally, was one of the organizers. "Let me show you around," he said. As it turned out, he was president of this venerable club. And, in a trice, it felt like a Homewood Homecoming: Me and Phil and Sid, together again. We caught up as he showed me the place. Not unexpectedly, we ended in the library.

Tristan Davies is a senior lecturer in the Johns Hopkins Writing Seminars.