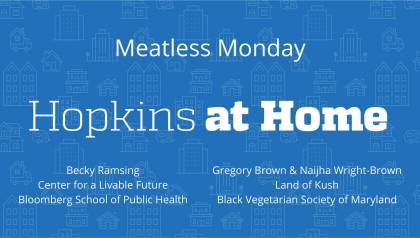 Designed to be engaging and interactive, this session will feature a Meatless Monday dinner demo and discussion. Center for a Livable Future faculty and staff will review the rationale and evidence for meat reduction; how it fits in the global syndemic of obesity, undernutrition, and climate change; and what we know about long term behavior change and Meatless Monday. The plant-based dinner demo of red lentil stew will use foods you may likely have in your pantry. Come join the preparation from your own kitchen or order food from The Land of Kush to enjoy as you watch live on Oct. 5. Join in the conversation on Twitter using the hashtag #HopkinsatHome.

Meatless Monday, with its simple message of "One day a week, cut the meat," started in 2003 in collaboration with the Johns Hopkins Center for a Livable Future. Since then, it has grown in recognition and practice to over 40 countries globally, anchoring action for health, climate, and other environmental issues.