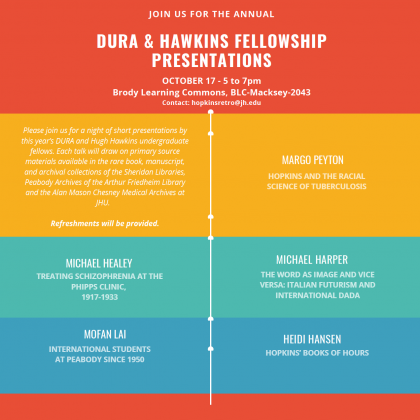 Please join us for a night of short presentations by this year's DURA and Hugh Hawkins undergraduate fellows, hosted by the Sheridan Libraries. Each of these talks—on subjects as diverse as the origins of American psychiatry, the "visual potentiality" of Italian Futurist poets, and late medieval French life—draw on primary source materials in the rare book, manuscript, and archival collections of the Sheridan Libraries, the Peabody Archives of the Arthur Friedheim Library, and the Alan Mason Chesney Medical Archives.

Previous research conducted by Susan Lamb and others has revealed the centrality of Adolf Meyer's "psychobiology" to the origins of American psychiatry. By analyzing case histories, staff conferences, correspondences, and research materials from the Phipps Clinic, this project aims to clarify how psychobiology anticipated later changes in psychiatric theory, practice, and policy by examining how Meyer and his staff adapted diagnostic categories like "schizophrenia" to different forms of community-based care.

Margo Peyton: "Hopkins and the Racial Science of Tuberculosis"

When most scientists argued that housing and nutrition were the major determinants of susceptibility to tuberculosis, Dr. Arnold Rich, the chair of the Johns Hopkins Pathology department from 1947-1958, used autopsy findings to support his claim that an inherent racial difference made blacks more susceptible to tuberculosis than whites in his 1944 publication, The Pathogenesis of Tuberculosis.

This project presents an overview of the history of international students and their musicianship at the Peabody Institute from 1950 to 2018.

Italian Futurist and Dadaist artists and poets revolutionized the conception of the word and engaged with it in terms of its visual potentiality. This talk examines the ways in which the avant-garde questioned the book as an artistic object and its fundamental materiality.

The Book of Hours had a central place in late medieval French life, as both a devotional text and a status symbol for those who were able to afford them. In preparation for a senior thesis to be completed this spring, I have examined the books of hours in the Sheridan Libraries' collections in order to understand what these texts can tell us about the lives of middle and upper class 15th century men and women in this region.