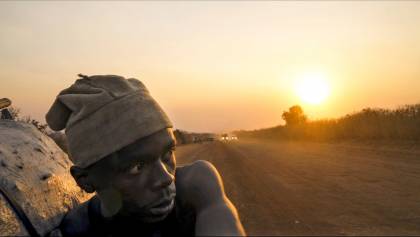 A screening of the film Makala, an extraordinarily revealing and surprisingly gorgeous look at everyday life for a charcoal salesman in the Democratic Republic of Congo.

French documentary filmmaker Emmanuel Gras follows 28-year-old Kabwita Kasongo through the entire process of making and selling charcoal. What sets Makala (the Swahili word for "charcoal") apart from other documentaries about workers in developing countries is its sheer filmic quality: Kabwita's simple but challenging objective to get the coal to the big city and sell enough to buy supplies to build a house for himself and his family has the dramatic force of the great humanist films from Bicycle Thieves on down, while Gras's virtuosic widescreen camerawork constantly anchors his individual struggle in the larger context of the Congo's breathtakingly beautiful landscape and its rapidly shifting economy.

This event is part of the Johns Hopkins 2019 Tournées Film Festival. The film is presented by Pier Larson, a professor of History at Johns Hopkins.