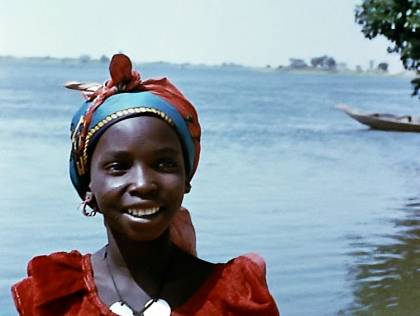 A screening of the film Jaguar, one of director Jean Rouch's classic ethnofictions that follows three young Songhay men from Niger -- Lam Ibrahim, Illo Goudel'ize, and the legendary performer Damoure Zika -- on a journey to the Gold Coast (modern day Ghana).

Rouch collaborated with his three subjects on an improvisational narrative. The four filmed the trip in mid-1950s, and reunited a few years later to record the sound, the participants remembering dialogue and making up commentary. The collaboration between filmmaker and subjects reveals a wide range of ethnic, geographic, and cultural differences within just a small piece of the African continent, as well as the social changes and patterns of migration that defined mid-century African life. More than plain ethnography, Rouch and his collaborators have created a new kind of myth.

This event is part of the Johns Hopkins 2019 Tournées Film Festival. The film is presented by Ousseina Alidou, a professor of African Languages and Literatures at Rutgers University. The film is in French with English subtitles.