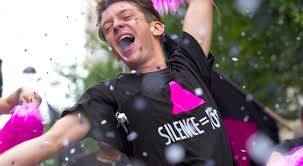 A screening of the film BPM (Beats per Minute), 120 battements par minute original title, a passionately acted ensemble movie about Act Up in France in the late 80s. Act Up was the confrontational direct-action movement which demanded immediate, large-scale research into AIDS. The movie compellingly combines elegy, tragedy, urgency, and a defiant euphoria. This film has what its title implies: a heartbeat. Peter Bradshaw from The Guardian called it "full of cinematic life."

This event is part of the Johns Hopkins 2019 Tournées Film Festival. The film is presented by Nicholas Papageorge, an assistant professor of Economics at Johns Hopkins University. The screening is preceded by an opening night reception at 6:30 p.m. The film has strong themes, sex scenes, and graphic nudity and is in French with English subtitles.