Weighing in for the holidays 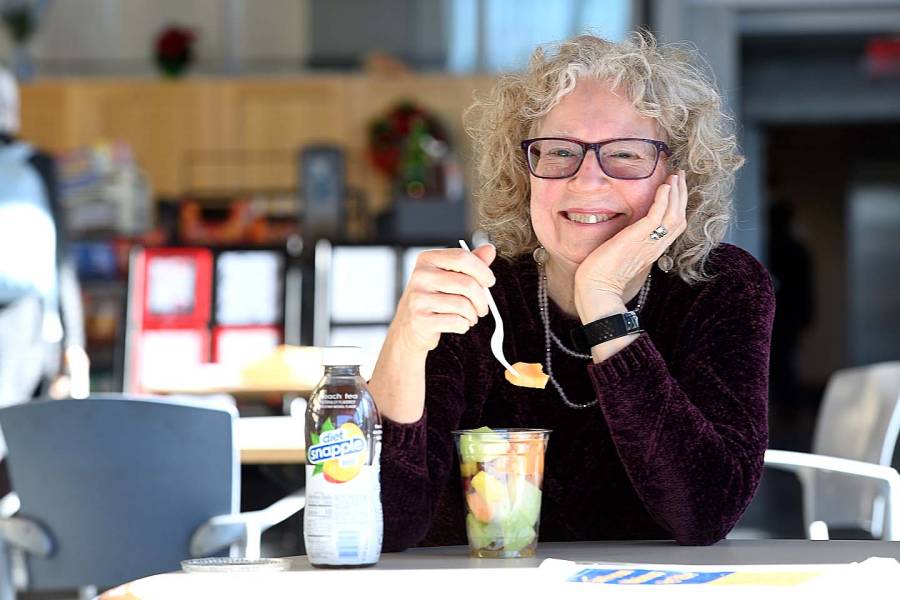 Image caption: SOM research associate Donna Rowley, who has lost about 95 pounds, takes a break at the Daily Grind on the East Baltimore campus.

Eat what you love and lose weight?! You must be kidding.

Nope, this is what you can do through Hopkins' partnership with Weight Watchers, which makes that declaration in its promotions and prides itself on being science-based.

It's that message—enjoy your food, be smart about lifestyle choices, and lose weight—that Donna Williams Rowley and hundreds of other Hopkins employees are embracing to good measure.

"One of the key things is to eat what you love," says Rowley, a research associate in the School of Medicine. "It's a matter of balancing how much."

Rowley first joined Weight Watchers, now known as WW, in 2012. Before then, she had struggled, procrastinated, thought the answer was in the gym (when all along it was within herself), and tried to do it on her own. "I lost 15 pounds and hit a plateau. I was working full time with two school-age children. Since the birth of my second child, I had become obese," says the Beltsville resident, who stands 5 feet, 3 inches tall. "I was very unhappy about my weight and my health."

That's when she received an email from the university's Wellness program offering WW to employees at a 50% discount and decided to give it a try.

"The email invited anyone who wanted to join to sit in on a meeting [on campus] the following day," Rowley says. "I went and never looked back."

In less than two years, she lost another 80 pounds for a total of about 95 pounds (from plus-size garments to size 8 jeans) and celebrated this past Thanksgiving with turkey and side dishes like WW's Moroccan chickpea-stuffed squash, "a big hit" with her family, she says.

"I'll probably do either [WW] brussels sprouts or roasted root vegetables for Christmas," says Rowley, noting a particular recipe (one of more than 10,000 offered through the program) calling for the sprouts to be "flavored with olive oil, balsamic vinegar, and maple syrup."

WW adds encouraging suggestions to its recipes, such as noting that the sprouts pair well with turkey or pork. Or, as the program recently advertised for Hanukkah, sweet and sour brisket.

"My family is very supportive, and I would never ask them to not eat anything [they wanted] in front of me," says Rowley, who counts "points" in WW instead of calories.

"I'm constantly asking myself if [something desired] is worth the points it will add to the day's total. Sometimes yes, sometimes no. That choice is different for every person. You have to change your relationship to food."

The JHU WW program is managed by Essence C. Pierce, a wellness specialist who manages the university's contract with WW and promotes the benefit to employees.

"WW has really evolved from when I used to attend in-person workshops with my mom in the 80s," Pierce says. "It's now a wholistic wellness program that continues to evolve. Its sophisticated use of technology is user-friendly and collects relevant data that supports employees in real time to make better choices and develop healthy habits. It also provides content that engages and reflects our diverse employee and national populations, offering recipes and content during Black History, Hispanic Heritage, and Celebrating Pride months and developing marketing to encourage more men to actively engage in their health."

In more metro Baltimore communities than not—both inside and outside the Beltway—certain WW recipes would be welcome at any holiday table: baked oysters (with low-fat cream cheese), crab cakes (reduced calorie mayo), and baked sauerkraut balls (fat-free cream cheese).

[Want an idea of what WW Baltimore–centric holiday menus might look like? Take a peek at these recipes for baked oysters, crab cakes, baked sauerkraut balls, pork loin with sauerkraut, apples, and beer, shrimp and sausage jambalaya, Hoppin' John, and old-fashioned gingerbread.]

"Broiled, not fried, crab cakes from a restaurant are very point-friendly," Rowley says. "So I take advantage of that frequently when I eat out."

And then there are the mix-and-match combos of WW recipes and a family's traditional fare that allow folks to enjoy a taste of the past with healthy alternatives, all while staying within the day's cumulative "point" total that delivers results.

"I'll do things like put my husband's wonderful homemade spaghetti sauce over zoodles [zucchini noodles] instead of pasta," Rowley says. "Or I'll substitute unsweetened applesauce for oil in things I like to bake."

Homemade spaghetti sauce and crab cakes on the right side of the ledger? What's not to like?

Last year, according to Pierce, 434 JHU employees were active users in WW with some 95% of them women. Most members, she says, were in early middle age—between 36 and 45 years old—and they collectively lost more than 1,000 pounds.

Rowley, who did some back-sliding during the long pandemic year, even though she still reports to the lab for work—says that she couldn't be happier with what the program has done for her.

"I have struggled with my weight all my life. When I was young, I would go on starvation diets—all the fad diets—to keep it in check," she says. "The last time I tried something like that, I hurt my stomach from too many acidic foods, and so I gave up on extreme diets."

Thus, the sensible approach of WW, whose recipe for success includes exercise, support group meetings (both virtual and in person), and common sense.

Not everyone at the Rowley table eats exactly like Donna, and her husband, Daniel, does almost all the cooking. He enjoys eating healthy, Rowley says, and finds it calming to rattle pots and pans at dinnertime.

"He's been extremely supportive of my journey and helps me calculate the points by making sure I know what's going into his recipes. He especially pays attention to how much oil is used, if any," she says. "It's been working well for us both."

To learn about WW's new individualized PersonalPoints Program and to get information on an upcoming webinar for JHU employees called Getting to Know WW, go here.