THE MUSIC IS BACK 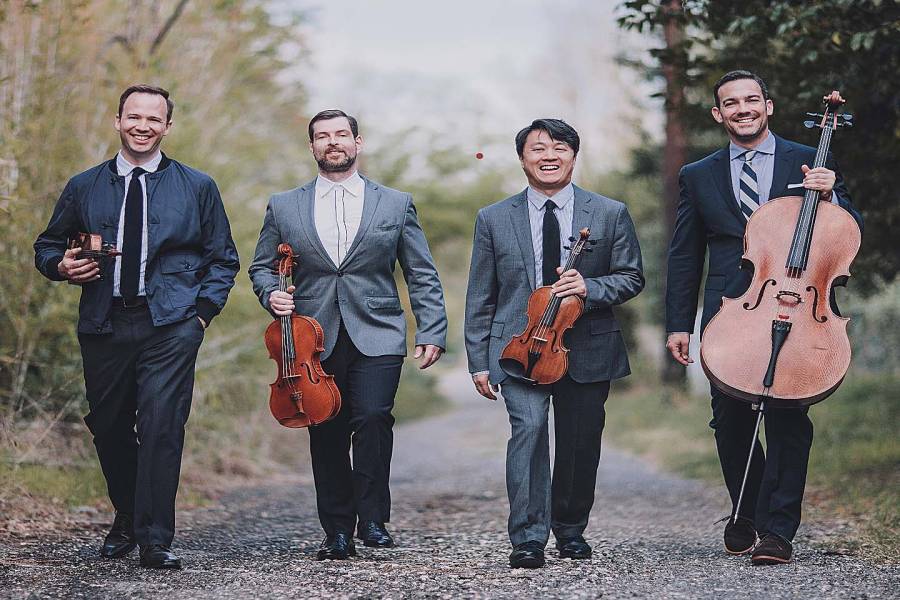 Image caption: The SHCS season opens with the Miró Quartet performing works by Mozart and Beethoven and the world premiere of a new piece by Pulitzer Prize–winning composer Caroline Shaw

The Shriver Hall Concert Series returns to in-person programming this season with a twist: Ticket holders for the mainstage series can choose to listen to the chamber music ensembles and solo recitalists in Homewood's Shriver Hall, or opt for watching the live performances from home. Tickets can be bought either for individual concerts or as part of a subscription series.

JHU faculty and staff are eligible for a 15% discount on single tickets when mentioning their affiliation when purchasing by phone, and a limited number of free tickets are available to JHU students beginning two weeks prior to each mainstage concert through Hopkins Groups.

In addition, SHCS each year presents a Discovery Series that showcases emerging talents as they make their Baltimore debuts in various venues in the area. The concerts are free, but reservations are required.

Although it became an independent nonprofit in 1970, SHCS—founded in 1965 by Hopkins researcher Ernest Bueding—maintains the Homewood campus as its main base.

The mainstage season opens with the Miró Quartet on Nov.14 in works by Mozart and Beethoven and the world premiere of a new work by Pulitzer Prize–winning composer Caroline Shaw, followed by the Baltimore recital debut of pianist Paul Lewis on Dec. 5 and the Baltimore debuts of the Grammy-nominated Danish String Quartet on Jan. 23 and the newly formed Junction Trio—violinist Stefan Jackiw, pianist Conrad Tao, and cellist Jay Campbell—on Feb. 13. The Shaw work is co-commissioned by SHCS and an international consortium of concert presenters.

On March 6, SHCS presents Grammy Award–winning mezzo-soprano Sasha Cooke's Baltimore recital debut in the East Coast premiere of How Do I Find You, her evening-length project that explores experiences and themes of America today, and on May 1, cellist Sheku Kanneh-Mason and pianist Isata Kanneh-Mason return to Charm City following their 2019 Baltimore debut in the SHCS Discovery Series. The Pacifica Quartet and soprano Karen Slack join forces on May 15 to perform a new work by Baltimore composer James Lee II, co-commissioned by SHCS and Carnegie Hall, and the season closes with the Baltimore debut of Irani-American harpsichordist Mahan Esfahani on June 12.

Opening the Discovery Series on Feb. 6 is the Baltimore debut of pianist Tianyuan Liu, winner of the 2019 Yale Gordon Concerto Competition. The event, which was postponed from the 2020–21 season, will be held at the Baltimore Museum of Art's Meyerhoff Auditorium. Program details will be announced at a later date.

On Feb. 26, violist Jordan Bak, mezzo-soprano Megan Moore, and pianist Wynona Wang make their Baltimore debuts in an afternoon of music by H. Leslie Adams, Jeffrey Mumford, Brahms, and Arnold Bax, plus the world premiere of Jessica Meyer's On fire...no, after you. The concert will take place at UMBC's Earl and Darielle Linehan Concert Hall. On fire...no, after you is composed to a set of three poems by Jennifer Beattie that encapsulate the extreme emotional dynamics experienced when falling for someone.

Pianist Eric Lu takes the stage for his Baltimore debut on April 2, performing works by Schumann, Brahms, Bach, and Chopin. The concert also will be held at UMBC's Earl and Darielle Linehan Concert Hall.

The Discovery Series closes on April 26 with a performance featuring the winner of the 2020 Yale Gordon Concerto Competition, which was postponed due to the pandemic and will be held this fall. The event will be presented in the Baltimore Museum of Art's Meyerhoff Auditorium, and artist and program details will be announced at a later date. The Yale Gordon Concerto Competition was established at JHU's Peabody Conservatory in 1983 through a gift from the Peggy and Yale Gordon Trust.

To ensure the health and well-being of its patrons, artists, staff, and volunteers, Shriver Hall Concert Series has implemented protocols to help reduce the transmission of COVID-19. Proof of vaccination is required, and masks must be worn at all times.