Ciaran Harman named a 2021 recipient of the AGU James B. Macelwane Medal

Ciaran Harman, the Russell Croft Faculty Scholar and associate professor in the Department of Environmental Health and Engineering at the Whiting School of Engineering and the Bloomberg School of Public Health, has been named a 2021 recipient of the American Geophysical Union's James B. Macelwane Medal, regarded as the highest honor for young scientists in earth and planetary sciences. 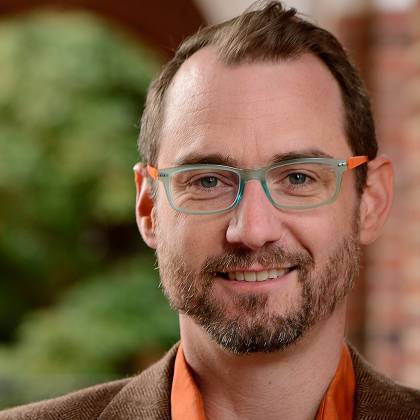 The James B. Macelwane Medal is given annually to early career scientists in recognition of their significant contributions to Earth and space science. Nominees are selected based on their depth and breadth of research, impact, and creativity as well as service, outreach, and diversity.

Harman studies the movement of water from rainfall through the landscape to streams and beyond, and how landscape structure evolves over time by the action of water. Much of his work is concerned with finding new ways to mechanistically describe physical processes at landscape scales—new ways that capture the emergent effects of the landscape's multiscale complexity without requiring its minute details to be represented explicitly. This addresses a fundamental knowledge gap that inhibits reliable predictions of streamflow quantity and quality in headwater catchments.

He and his students combine theory, experiments, modeling, fieldwork, and data analysis to study a range of topics from the effect of drought on streamflow, to sewage backups in Baltimore basements, to the evolution of planetary topography over millions of years.

He will be formally recognized at AGU's Honors Ceremony and Banquet, to be held during the organization's fall meeting in mid-December in New Orleans.