On campus at last 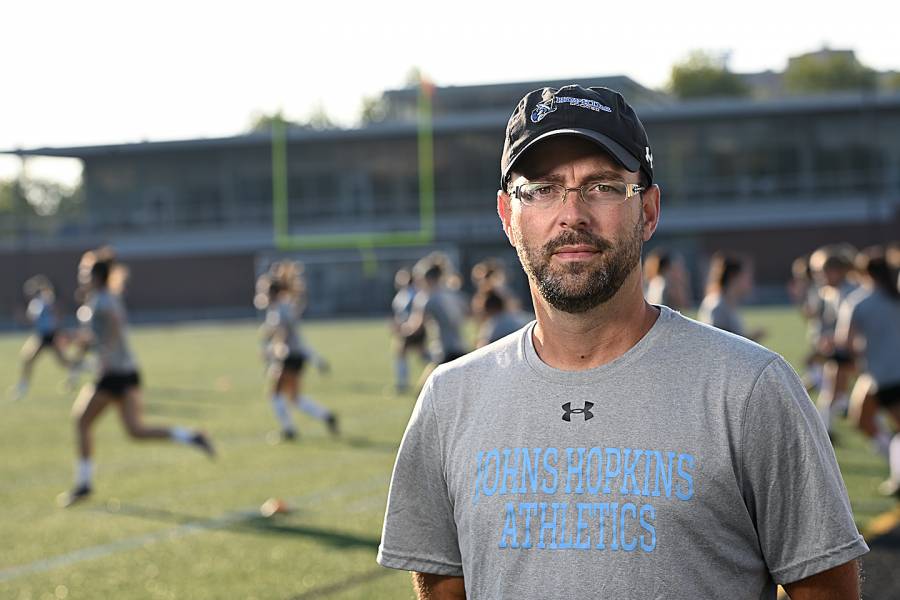 Image caption: Like most of the 4,600 hired for staff positions across the university during the pandemic, women’s soccer coach Dan Weiler is meeting his colleagues and students in the flesh for the first time.

Dan Weiler, a highly accomplished women's college soccer coach, arrived at Johns Hopkins to lead the Blue Jays on March 1, 2020, just days before COVID-19 shut down the university along with most of the country. Weiler had time to visit the Homewood campus and meet a few colleagues in the Athletics Department, had one team meeting with about half the players—and then …

BOOM!—the ball headed for the back of the net was blocked by the pandemic.

Of the brief week or so he was on campus before sheltering in place at a family lake house in Minnesota, Weiler says, "The staff was welcoming and supportive. But [afterward], a 'real' connection over Zoom was challenging. I did get to know my colleagues, but it took longer than usual."

He returned to campus this past March. Now preparing for the first regular game of the 2021 fall schedule, over the Labor Day weekend, Weiler is part of a Johns Hopkins community that includes some 4,600 people hired for staff jobs across the university since the 2020 shutdown.

With the university's campuses now reopening, many will be meeting their colleagues and students in the flesh for the first time.

Weiler was able to practice with the team this past March and April and play two games before being forced to retreat because of a resurgence of the coronavirus, but "there was very little soccer development," he says of the players he'd recruited upon landing the job. Returning players also missed out on the finer points of play that don't easily transmit over a computer monitor.

"We had to re-create developmental ideas into virtual settings, but they really couldn't be duplicated. It was a year of focusing on character development and team cohesion. We had to build rapport virtually."

Kait Howard is a pandemic hire who reported to her office in Johns Hopkins at Keswick for the first time in mid-August. The overall experience of settling into the new chapter of her life, says the new media representative in the Office of Communications, "was just a bit strange."

Howard interviewed for the job while living in Brooklyn, New York, was hired, and signed a lease on an apartment without setting foot in Baltimore, to which she'd never been.

"While I wouldn't recommend that anyone rent a place they've never set foot in, I ended up in a good spot," she says. "A lot of people thought I was being rash moving to a new city for a new job in the middle of a pandemic, but it worked out."

Kimberly Myers—manager of the Hopkins Talent Acquisition team of recruiters, consultants, and specialists—had a hand in many of the interviews that led to new hires throughout the Hopkins community. The department's director is Jonathan Thompson.

"Of course, you lose some of the interpersonal feelings that you get in person" when connecting with someone virtually, Myers says. "You have to give some grace for technical mishaps and keep moving forward."

Thompson, who has a staff of 25, acknowledges the problem of Zoom fatigue. "On camera, you feel like you're 'on' all the time." In person, he says, it's easier to relax between big moments in the office.

Jessica Griffiths, also a specialist in Talent Acquisition, has been on both sides of the Zoom hiring process. She interviewed and made decisions about job candidates while working at the Kennedy Krieger Institute before being hired via Zoom by JHU. "For me, the transition was very smooth," she says.

The upside of hiring virtually and allowing employees to work from home—whether offices are closed or not—is a far greater pool of expertise to draw from, she says. "Remote work has given us access to talent that we've never had before. We've been able to find people who never would have relocated here for the job. Because they could work from home, they accepted positions with Hopkins."

Ashley F. Cheatham, a communications adviser in JHU's Office of Human Resources, was hired virtually and has yet to report to the office or meet her co-workers in person.

"I can't imagine my colleagues will be much different in person than what I've already observed during virtual meetings, with the exception of how tall or short someone is," Cheatham says with a laugh. "Not yet seeing my on-site workspace is a bummer, but just having an idea of where I'll be working and what to expect is enough for now. It gives me something to look forward to."

Just as coach Weiler is looking forward to a win on Sept. 4 against Randolph-Macon, with more to follow as the fall women's soccer season begins.

"Typically, you know your team by now," he says. "After a year, I'm still learning."