Lori Beth Finkelstein to helm Evergreen and Homewood museums, Michelle Fitzgerald to serve as curator of collections for both 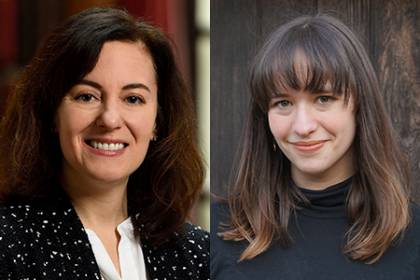 In announcing Finkelstein's new role, Tabb said, "Since Lori started at Evergreen in March 2019, I have been impressed by her rigorous curiosity, her abiding love for teaching, her collaborative spirit, and her relentless determination to share Evergreen's remarkable collection with a variety of audiences. I expect her to bring these same qualities to Homewood, where she has been interim director and curator since June."

In leading Homewood, which was built ca. 1801, Finkelstein is returning to a time period she knows well, as her dissertation examined gender and aging in the early Republic with a focus on the creation of a federal pension system for Revolutionary War widows.

"A lot of important work has been done at Homewood in recent years to interpret the history of enslaved individuals who lived on the estate," Finkelstein said. "One of our next steps will be to better understand the history of slavery at Homewood in the context of what was happening elsewhere in the Baltimore area during the early 1800s and later."

Evergreen was originally constructed in 1858 and later expanded.

Tabb said he is especially pleased with how Finkelstein recognizes the museums' complementary histories. "Lori brings to her new position a vision of the museums as a unit—two distinct but related points along the spectrum of American history—which will provide a vital framework for the museums' continued analyses of race, class, gender, labor, and aesthetics in 19th- and 20th-century America."

Finkelstein began her career in 2000 as a museum educator and subsequently was curator of the Museum of Early Trades and Crafts in Madison, New Jersey, and director of education and interpretation at Mt. Vernon Hotel Museum and Garden in New York City. Before joining Johns Hopkins, she served as director of education and interpretation at the Baltimore Museum of Industry and as vice president of education, interpretation, and volunteer programs at the Maryland Zoo. She also served as an instructor in the Krieger School's Museums & Society program.

Finkelstein holds a bachelor's degree in North American studies from McGill University in Montreal and a doctorate in U.S. history from New York University.

Fitzgerald, who received a master's degree from the Winterthur Program in American Material Culture at the University of Delaware, joined Homewood as assistant curator in November 2018. As full-time curator of collections for both Homewood and Evergreen, she will focus on stewarding, researching, and interpreting the museums' collections.

"Michelle's enthusiasm for and expertise in material culture have quickly made her an indispensable part of the museums' team," Tabb said.