Jane Hixson, the oldest person on the Johns Hopkins University payroll, turned 100 years old on Dec. 9 and was feted that day in Hagerstown with a drive-by parade that included friends and co-workers, a fire engine, and a cheering cameo by the Hopkins Blue Jay.

"My life at Johns Hopkins has been fantastic," says Hixson, a veteran data entry worker who was still going to the office in Hagerstown until the pandemic shut down all campuses in March. "It's been part of my life for so long."

Jane Elizabeth Hawn Hixson and her high school diploma began working in public health research in 1957, back when the U.S.S.R. launched Sputnik, Earth's first man-made satellite. Her job at the time was with the National Cancer Institute in Hagerstown, where her family had moved from Martinsburg, West Virginia, when she was a child.

During World War II, she worked for Fairchild Aircraft in Dayton, Ohio, and then the Canadian government, in Washington, D.C. She returned to Hagerstown near war's end and married Robert C. Hixson on June 7, 1945. He died in 1992.

In 1968, Hixson began doing statistical research for JHU, which had public health offices in the basement of the Washington County Health Department.

Says her son, David C. Hixson, a retired South Hagerstown High School science teacher, "Every research study that Jane worked on for the NCI and JHU related to a longitudinal study following the effects of family history, health conditions, and the environment of the individual for the disease being studied. She interviewed people by phone, tabulated research, wrote reports, set up and went out with teams to document cause of death in various JHU studies."

In 2011, the university consolidated its many research studies in the Hagerstown area—including a long-running cancer study called Operation CLUE—at offices on Dual Highway.

Up until March, Hixson drove her 1997 Chevrolet to the Comstock Center for Health Research and Prevention—named for her longtime boss, the visionary epidemiologist George W. Comstock (1915–2007)—for her one-day-every-other-week shift.

A few days before her birthday, the Comstock Center's marquee let all of Hagerstown know that Jane Hixson was celebrating a very special day with a sign announcing "Happy 100th Birthday Jane, We Love You."

About his mother's driving—which he calls "the elephant in the room"— Dave Hixson will say only that it has long been under discussion.

What do you say to a fiercely independent woman who still lives alone and earned her driver's license in 1936, the year Jesse Owens won gold at the Nazi Olympics? Who, because of deprivation during the Great Depression—"I lived it," she says—still eats every bit of food on her plate?

And what to call someone who has been doing office work since before the advent of the human resources industry?

In her years with the university—many of them before office computers became ubiquitous—Hixson has provided clerical and data support for hundreds of projects, interacted with generations of students and faculty, and can still be relied upon for her attention to detail and accurate data entry.

"I kept time sheets for people who went out and did the door-to-door [health] surveys. A lot of them were students," she says. "You might say I was the secretary—I did a lot of filing—but I mostly kept [record keeping] going." 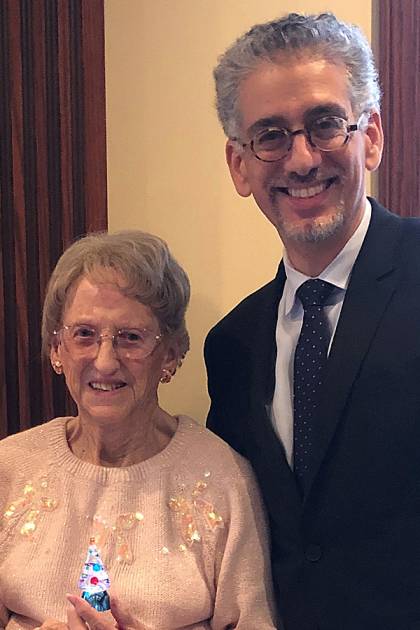 Image caption: Jane Hixson and Josef Coresh, director of the Comstock Center, celebrate the holidays in 2019.

While supporting hundreds of projects in her more-than-50-year JHU career, Hixson has been known as Miss Jane, an honorific afforded to the institutional memory of public health research in Western Maryland.

Melissa Minotti is director of operations at the Comstock Center. Josef Coresh is the center's director.

Minotti describes Hixson as "kind and gentle, yet strong in ways that are important."

If you happened to be in line with his mother at the supermarket, says her son, you'd be friends by the time your groceries were bagged. (It was a trait she shared with her older sister, Thelma, who lived to be 95 and was known to send birthday cards to people she'd met just the day before.)

"I remember playing on the floor as a little girl and hearing the grownups talk," she said by phone the day after birthday love and fanfare had rolled past as she sat on a bench in her son's circular driveway. "I could hear them talking about some man or, you know, some so-and-so that they hadn't seen in a while. And someone else would say that he'd died of the Spanish flu. That's where I learned about it, playing on the floor."

Asked for an anecdote that best describes Hixson, Minotti recalled a moment from Miss Jane's birthday.

"On the day of her parade," Minotti says, "Miss Jane told a local reporter that she'd love to come back to work after the COVID shutdown is over."

And no one who has had the pleasure of her company would doubt it. After all, Miss Jane's mother lived to be 105.