Economist Steve Hanke knighted by the president of Albania

Read about Hanke's recognition, plus research awards received by other WSE faculty

Steve Hanke, a professor in the Whiting School's Department of Environmental Health and Engineering, has been knighted by Republic of Albania President Ilir Meta. 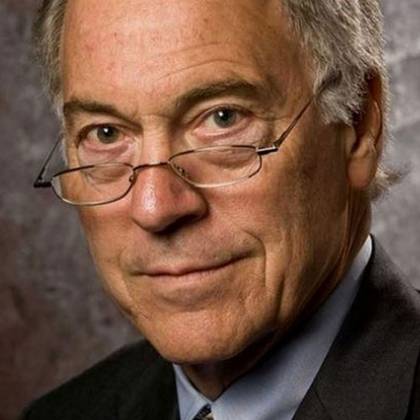 Meta's declaration of the honor, which was announced Aug. 5, said:

Prof. Dr. Steve H. Hanke will hereby become a Knight of the Order of the Flag. Prof. Hanke is one of the world's most outstanding scholars and distinguished experts in the field of economics. He has provided significant contributions to the Republic of Albania, where he introduced and implemented the principles of market economy and sound money to the post-Communist Republic. Prof. Hanke has also undertaken important strategic initiatives that have facilitated the integration of the Republic of Albania into European and world markets, the integration of Albania into the Balkans, and the establishment of a strategic alliance with the United States of America.

The only other American to have received the recognition, which is one of Albania's highest honors, is Donald Rumsfeld, former secretary of defense, who was knighted in 2013.

Coronavirus travel restrictions prohibited a formal ceremony in Albania in August, but Hanke says that he expects an initiation ceremony to be held in Washington, D.C., in February, when Meta is scheduled to visit the United States, and that a ceremony will be held in Tirana, the country's capital, in late spring.

Read more about Hanke here and in this National Review piece about his knighthood.

Yun Chen, an assistant professor in the Department of Mechanical Engineering, has been selected to receive a Trailblazer Award from the National Institutes of Health. The two-year, $400,000 award, administered through the National Institute of Biomedical Imaging and Bioengineering, supports innovative early-career researchers tackling high-risk, potentially high-impact projects. The ultimate goal is to foster the invention of methods, instruments, and materials that will open new avenues of research. Chen and her team will use the award to develop a first-of-its-kind, tension-sensitive drug release system that targets only diseased cells, leaving healthy cells alone. The system promises to enhance efficacy in the treatment of diseases such as cancer, kidney disease, and dementia, while reducing adverse effects and improving both survival rates and patients' quality of life.

René Vidal, the director of the Mathematical Institute for Data Science, known as MINDS, and the Herschel L. Seder Professor in the Department of Biomedical Engineering, is leading a team of engineers, mathematicians, and theoretical computer scientists from multiple institutions who seek to revolutionize our understanding of the mathematical and scientiﬁc foundations of deep learning. Their project, Collaborative Research: Transferable, Hierarchical, Expressive, Optimal, Robust, and Interpretable NETworks, or THEORINET, is funded by the National Science Foundation–Simons Foundation's Research Collaborations on the Mathematical and Scientific Foundations of Deep Learning (MoDL) program and will receive $10 million over five years. The Johns Hopkins–led consortium is one of only two teams that were awarded funding for this national effort. Vidal is joined by three additional faculty members from MINDS: Mauro Maggioni, Bloomberg Distinguished Professor in the Department of Applied Mathematics and Statistics and the Department of Mathematics; Soledad Villar, an assistant professor in Applied Mathematics and Statistics; and Joshua Vogelstein, an assistant professor in the Department of Biomedical Engineering. Additional co-investigators come from Duke University, UC Berkeley, the University of Pennsylvania, Stanford University, and the Technical University of Berlin.