The Johns Hopkins Bloomberg School of Public Health has named two recipients for the Dean's Medal: Cyrus S. Poonawalla, for his lifelong work in developing and delivering affordable vaccines, and Jaume Casals, for his enduring commitment to improving health and social policy by encouraging public and private sector collaboration. 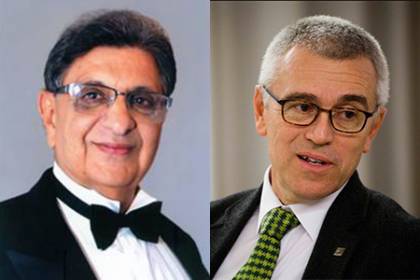 The awards will be presented during Convocation in 2021.

Cyrus Poonawalla founded the biotech company Serum Institute of India in 1966 and has led it to a leadership position in the field of vaccine development, particularly pediatric vaccines. Using an innovative approach focused on scale combined with a dedication to low-cost access, SII has been able to deliver vaccines on a vast scale. Protecting more than two- thirds of the global infant population has resulted in an estimated saving of 30 million lives.

Poonawalla has always been committed to collaboration, and the company partnered early on with UNICEF and the Pan-American Health Organization. It is estimated that the SII measles vaccine supplied to UNICEF and PAHO between 1990 and 2016 averted 22 million deaths.

Today, SII is the world's largest producer of vaccines by number of doses, producing more than 1.5 billion doses a year of lifesaving vaccines used in more than 170 countries to combat infectious diseases that include polio, rotavirus, rabies, measles, mumps, rubella, pertussis, tetanus, tuberculosis, influenza, pneumococcus, H. influenzae type b, and meningococcus. In response to the current COVID-19 pandemic and under Poonawalla's leadership, SII is collaborating with Oxford University and Astra Zeneca, as well as Novavax and many other partners, to manufacture and distribute millions of doses of a novel coronavirus vaccine, if it is shown to be efficacious.

Jaume Casals has served as rector of Universitat Pompeu Fabra in Barcelona, Spain, since 2013, and led the establishment of the Johns Hopkins–UPF Public Policy Center, which is jointly sponsored by UPF and the Bloomberg School. The center supports public sector decision-makers in developing workable solutions for complex socioeconomic and public health challenges such as climate change and the COVID-19 pandemic. Under Casals' leadership, the center has become an international point of reference in health and social policy, consulting with and assisting international agencies, governments, and private and public institutions in their work.

A philosopher by training, Casals focuses his research on the Greek genesis of modern and contemporary thought, philosophy, and literature, and he has authored numerous articles and books, including translating and editing works by Montaigne, Montesquieu, Berkeley, and Bergson. He is a tireless advocate for the importance of academic work being accessible to the general public and for demonstrating its relevance to contemporary problems.

With a vision of developing new areas of knowledge that transcend disciplinary boundaries, Casals has consistently urged the academic enterprise to respond to the complexity of today's threats to both human and planetary health and well-being by teaching with a focus on interdisciplinary and cutting-edge research. He sees the scholarly community, and the Johns Hopkins–UPF Public Policy Center more specifically, as an ideal space for public and private institutions to collaborate in their work of safeguarding the health of populations.