From thousand-people gatherings to an audience of two 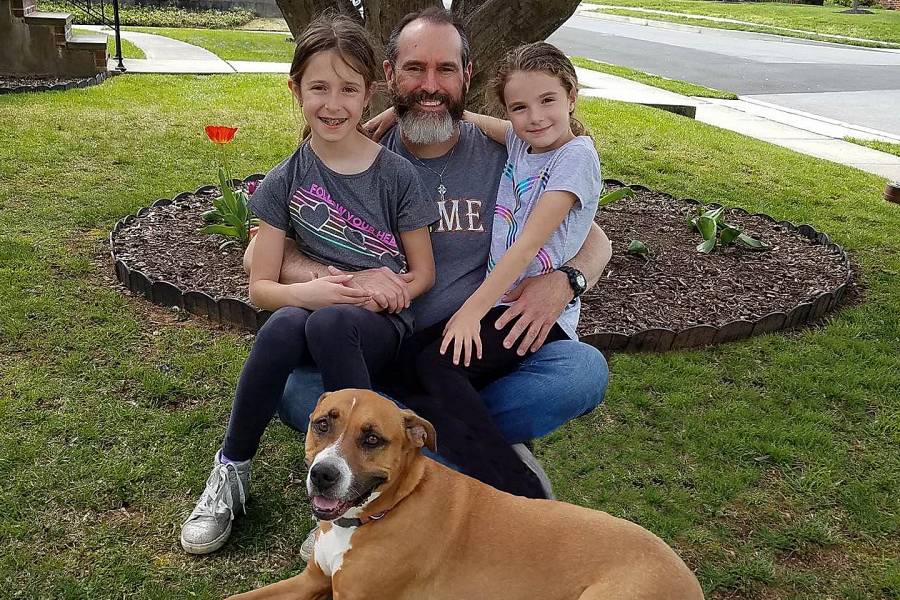 Tim Richardson would rather stand before a thousand people and make a sales pitch than do a math problem. Which makes him something of a rarity in the Hopkins universe.

While the director of Corporate and Foundation Relations at the Whiting School of Engineering hasn't done his song-and-dance in person since the pandemic hit, he has done his share of math problems. And happily reports to be proficient in second-grade arithmetic.

"Three days a week I'm juggling full-time work, being a schoolteacher, soccer coach, and chef to my daughters," says Richardson, father of 8-year-old Olivia and her sister, Lillian, 6, whose mom is a frontline health care worker. "Math isn't the same as it was when I was at [Archbishop] Curley" [High School] in Baltimore.

The family's dining room table in Catonsville serves as Richardson's shelter-in-place office, classroom for the girls, and spot to enjoy one of Dad's homemade tacos or an everybody-pitching-in pizza.

Gregarious and quick with a handshake (Tim's the guy who pops into your cubicle to ask "What's up?" when you're on deadline), Richardson has brought some of his own tricks to the teaching game. His kids, and their teachers, have embraced it.

"My younger daughter and I created Storytime with Lillian," he says. "I record a YouTube video of her reading something like one of the Elephant and Piggie books, and then I send it to her teacher for a grade."

The schtick (and the best entertainment always has one) occurs when Lillian struggles with a word and turns to her father for help. Holding an illustrated page featuring Gerald (the pachyderm) and Piggie (the pig) to the camera (and Dad), the kindergartner waits for guidance, mouths the word for confirmation, and then, having secured a new vocabulary word, continues reading the story aloud.

"Her teacher liked it so much she showed the video to her own children," Richardson says.

Work challenges have not been solved so easily. Just days before Johns Hopkins shut down all its campuses in mid-March, Richardson and colleagues were about to launch this year's Development and Alumni Relations Talent Conference. Richardson had been selected as one of three organizers for an event that would entail more than 70 workshops and lectures being held from Baltimore to Washington.

"We worked on that for six months—it became a full-time job in itself," Richardson says. About a dozen of the "top sessions have been rolled out" remotely. And while they're better than nothing, he says, the over-the-top extrovert finds "interacting with people by tech disappointing."

This year the DAR awards were "handed out" virtually by Fritz Schroeder, vice president for development and alumni relations, on June 22. "Fritz did a PowerPoint and paused on each person's photo and bio when they were named," he says. Before the pandemic, Richardson's team had worried about rain, and he recalled the year that a massive snowstorm snarled the event. Instead, he says, "the virus crushed the whole thing right out of the gate." Who knew?

With his daughters, and accompanied by dog Sadie, Richardson gets to experience actual interaction. "We ride bikes and play soccer a lot," he says, "and take walks down to the swinging bridge" at Patapsco Valley State Park. "On the days they're with me, I get up early to work and stay up late to work."