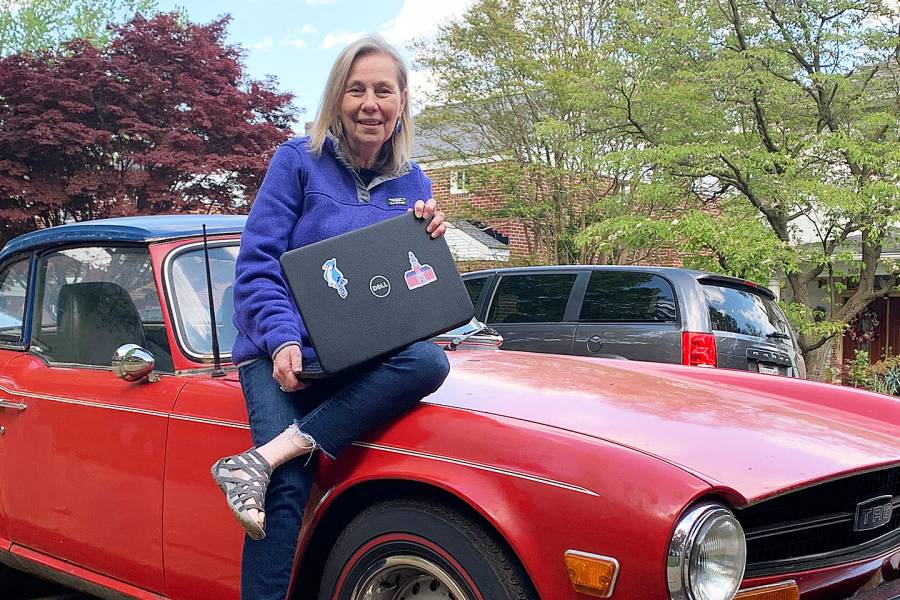 It's one of the biggest events of the year on the Homewood campus, and for the past two decades it's been shepherded with panache by Pat Conklin, director of reunions and homecoming for Johns Hopkins' Alumni Relations Office.

It's Alumni Weekend, beginning at 8 p.m. this evening, and—after presentations on everything from the global you-know-what to the making of the beloved Berger cookie—festivities conclude on Sunday with part two of the reunion of the Class of 1990.

Typically, Alumni Weekend ends with a whole lot of shaking at the Hullabalooza dance party, a crowd favorite. This year, like everything from baseball to bagels in Baltimore and beyond, things are different.

All events (including morning coffee at 11 a.m. on Saturday with JHU President Ron Daniels) will take place like a magic mirror on the other side of Zoom, Facebook Live, and YouTube Live screens. And the DJ dance party will get your motor running tonight at 8 p.m.

"We thought beginning with the dance was a good way to get people excited for the weekend," says Conklin, who put the four days of events together with team members Kayce Robinson, Ann Shenasky, Sydney Dawson, and Rachel Doliner. They were assisted by recent JHU graduates Anja Shahu and Lilian Zhong.

Because folks will most likely be dancing from home, the 2020 Hullabalooza may meet the true definition of a "sock hop" (keep an ear out, says DJ Chris Kopec, for the late, great Little Richard), in that many will be slipping-and-a-sliding in their stockinged feet.

In years past, Conklin says, nearly 1,000 people have attended the dance party on the Decker Quad. This time, some 112,000 virtual invitations went out across the Hopkins spectrum for Alumni Weekend.

Those on the guest list included alumni going back to the Second World War plus faculty, staff, parents, students, family, and friends affiliated with all nine schools. "Everybody needs a boost," Conklin says.

Although nowhere near 112,000 are expected to tune in, the chance of a technology glitch—the remote-viewing equivalent of a rained-out picnic—has had the Conklin team checking, double-checking, and triple-checking all apps and hookups.

She learned this early in the work-from-home era when the internet connection at home in Hamilton kept going in and out.

"I try to be as cheerful as possible," says Conklin, who indeed, is quite cheerful. "But technology was really testing me. My husband suggested I move to an upstairs bedroom where the router is and plug right into it. I've been soaring ever since."

To make sure this weekend soars as planned, Conklin, as is her custom, "planned for worst-case scenarios. My whole team has personal hot spots if something goes wrong on our end.

"If the host internet goes down, we have a co-host and a third person in place who will send messages to the contact running applications for the various events," all of which can be accessed by smartphone, tablet, and computer.

"One touch takes you to the event you're looking for," Conklin says.

Such as a demonstration by celebrated chef John Shields on how to make the perfect Maryland crab cake at 12:30 p.m. on Saturday. Asked if it wasn't a bit cruel for viewers to be able to look but not taste the delicacy—a worst-case scenario if ever there was one—Conklin says that she had a solution to that one, too.

"We've arranged with Pappas [all three locations] and Jimmy's Seafood [in Dundalk] for pre-event shipping or for curbside carryout in the morning," she says. Plus, she provided a crab cake recipe on the Alumni Weekend website. "You can eat a crab cake while watching John Shields make one."