Aaron Birkland hunkers down in his Shenandoah Valley basement 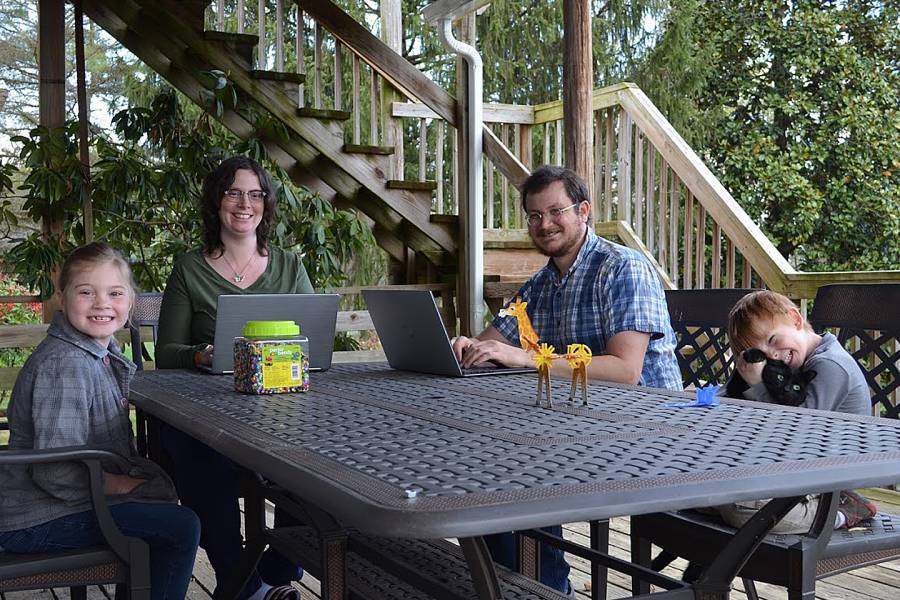 Credit: COURTESY OF THE BIRKLAND FAMILY

In a famous passage from the Philip Roth novel Portnoy's Complaint, the narrator asks, "You think you got guilt?"

Though JHU software engineer Aaron Birkland asserts that his family's experience while sheltering in place isn't too bad, it does beg the question: "You think you got headaches?"

Working from home in the small town of Bridgewater, Virginia—population 5,600—in the Shenandoah Valley, he went down the list of his family's challenges:

Also, there are eight antique refrigerators occupying the family garage. But Aaron, a collector fascinated with refrigeration since reading about it as a kid in The World Book Encyclopedia, will tell you that's a good thing.

"There's nothing like bringing an old machine back to life," says Aaron, who finds the tinkering relaxing. "They were still experimenting with refrigeration 80 years ago. Today, they're all pretty much the same under the hood."

Very little is the same under the roof of the Birkland home. 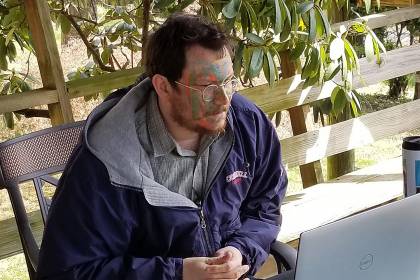 Image caption: Aaron at work after an encounter with his kids

"We're trying to find a rhythm that lets us survive together," says Aaron, a senior software engineer employed by Johns Hopkins' Sheridan Libraries since 2015. "We're living in half of our house, and our shared office is the kitchen table. It's all a blessing and a curse."

A blessing, says Aaron—who has always worked remotely for JHU and thus has taken the lead in child care for some time—is a sunny day when "one of us, or both of us, goes out on the deck to work."

The deck is a good perch, he says, from which to watch the kids play in the yard, where Anna Louise and Lars not long ago found a hole in the ground that was strewn with feathers. "We deduced there might have been a fox there," says Aaron, noting that the "find" heightened Lars' interest in archaeology.

A curse, he says, is a rainy day, when the basement—with two bedrooms—becomes a cave for Mama Bear and Papa Bear and their cubs.

While Lars digs other holes in the yard "for clues," his father says, Johanna has hustled to get her courses online, and Aaron composed a "retrospective" for his team on what technologies and processes have been going well and which have not. One of the winners, he says, was the Brody Learning Commons' Visualization Wall, a large, interactive touch screen that helps students with everything from research to wellness.

And a winning moment on the home front was when Anna Louise, perhaps inspired by watching her father repair refrigerators twice as old as himself, built a fire engine.

"She cut the pieces out of cardboard and put it together with a glue gun," he says. "She painted it and then used aluminum cans for water tanks and a straw for the hose."

Aaron promised to send a video of the project to Anna Louise's teacher, but, with everything else going on, hasn't quite gotten around to it yet. What he has done is show his daughter a video about bacteriophages.

"I wanted to show her that all viruses weren't necessarily bad. She was happy that there are good bacteria that can kill the bad viruses," says Aaron, noting that our current moment is likely the one that will define his children's generation.