As concert series coordinator, she handles details for some 1,000 performances a year 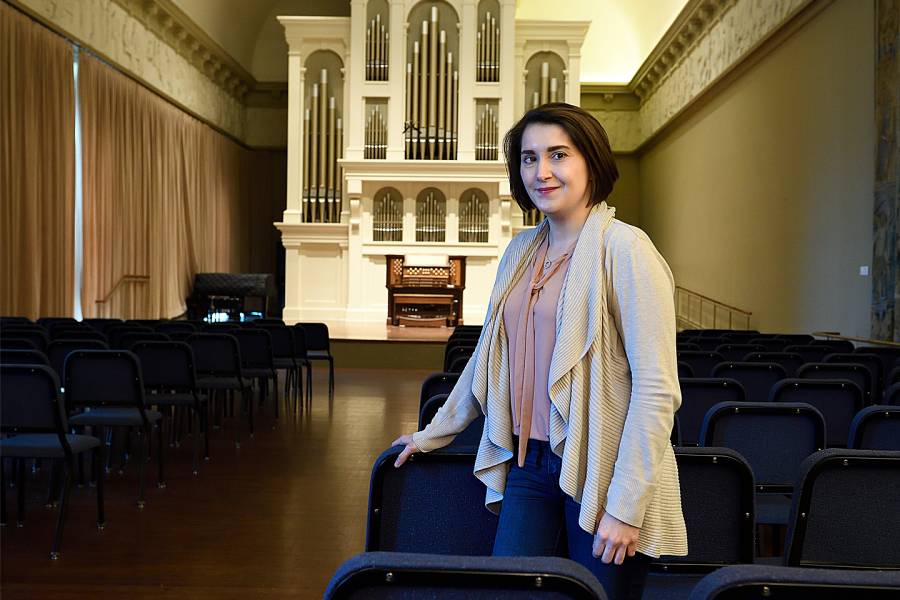 Chelsea Buyalos considers it a blessing that she was a Peabody Conservatory student earning her bachelor's and master's degrees in vocal performance before she joined the staff in 2012 as the concert series coordinator. Understanding Peabody's performance spaces from both the artist's and scheduler's perspectives, she says, provided her with a spatial awareness of everything that goes into a concert.

"I'm looking at the logistics of someone's event and how is it going to affect all of the things that are around it," she says while sitting in the Miriam A. Friedberg Concert Hall in early March. "One thing that comes to mind is sound bleed. In Friedberg, we have sound bleed from the second floor of the Conservatory building. So if there was a brass ensemble rehearsing in room 206C, we would hear them, and if we had a recording session in here, it would be impacted."

She says that she enjoys sharing this comprehensive understanding of concert organizing with students when scheduling recitals for their degree programs, letting them get a glimpse of some of the behind-the-scenes work involved in a working musician's life. Buyalos also maintains a private studio working with students in voice and piano, including via online instruction—a skill she's been sharing with faculty as Peabody shifts to remote teaching during the current coronavirus outbreak that led the university to suspend on-campus activities for the semester. This interview has been updated to reflect those changes along with a conversation about her regular duties.

What does the concert series coordinator do here at Peabody?

I'm housed in the concert office, which is responsible for the day-to-day scheduling of musical activities that we have, especially if they take place in a performance space. I also oversee several Conservatory competitions that are held throughout the year and produce the Friday Noon:30 recital series, which is a weekly recital held on Fridays at 12:30 p.m. that showcases students from various departments.

We have six performance halls, with Miriam A. Friedberg Concert Hall being our largest. Our main stage opera was going to be here, and many of our large ensemble performances take place in this space as well. There are also the Cohen-Davison Family Theatre, Leith Symington Griswold Hall, Joe Byrd Hall, and Hilda and Douglas Goodwin Recital Hall. Additionally, there's our Centre Street Performance Studio, which is a fairly new space that is mainly used for student projects and smaller, more intimate events.

On average over the course of an academic year, how many concerts, recitals, and events take place?

I would say we are in the ballpark of a thousand events. That includes major concerts, opera productions, and student degree recitals—we schedule between 250 and 300 of those each academic year. This number also includes lectures, master classes, and departmental recitals. So we have a lot of events going on, not just the more public–facing concerts that you see weekly.

How and when does this scheduling take place?

Planning for the 2020–21 season is well underway. Faculty submissions for projects are being processed, and meetings with various departments are going on. The Concert and Ensemble Operations teams are hard at work fitting it all together into a calendar. It's a big game of Tetris! 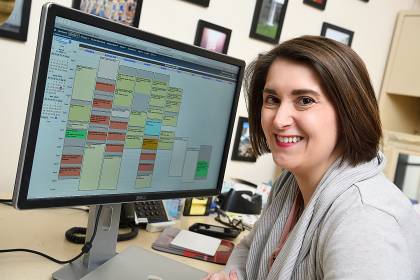 Image caption: Before the coronavirus outbreak, Buyalos was coordinating dozens of performances for a Saturday in April.

What criteria go into scheduling? You mentioned that large symphony orchestras and opera go on in Friedberg. I know many jazz concerts take place in Joe Byrd Hall. But what other considerations go into scheduling who goes where?

First, we get a blank calendar, and members of our Concert and Ensemble Operations team meet with each department to discuss planned projects for the upcoming year and the logistics surrounding them. If we have an event that requires two pianos, what halls can accommodate two pianos, and how much time is needed to prepare those pianos? Another scenario to consider is if a harpsichord is being used for a historical performance event. That instrument requires special attention when it comes to moving and tuning. We have to think about not just the event itself but the lead-up, all the rehearsal time, and logistical elements. So there's a lot of behind-the-scenes work to consider when having those conversations.

I know you're a vocalist as well. Do you have a favorite hall to perform in?

I like them all because I've had the pleasure of working in them as a student. But I would say in terms of performance, I tend to like Goodwin Hall. Acoustically, for me, I feel more in touch with what I'm doing as a performer. I love that intimate setup. It's not big enough where it's intimidating, but it's a space where, as a performer, you have that opportunity to make a connection with the audience. It's not so cavernous that I feel that there's a big separation between us, but it's also not so close that I can see the whites of their eyes.

You're also a teacher who runs your own private studio, and you do online work with your students. How have you been helping out with the transition to remote learning?

Before COVID-19 arrived at our doorstep, I had been teaching private lessons on various online platforms for the past six years. Since our transition to online teaching at Peabody, I have had the pleasure of doing several presentations to both the Preparatory and Conservatory faculty on how to make the transition to an online format for private teaching. I hope by sharing my experiences in the world of online teaching, including both my successes and failures, that faculty walk away with at least one tip or trick that could benefit them in this new realm of teaching and learning.

Getting to work with faculty one-on-one in this new way has been a wonderful opportunity and has allowed us all to work collaboratively in ways that would not have come about if it was a normal day in the office. I love helping others do what they love to do: teach. I always remind those who ask about online teaching that we as educators are charged with providing a sense of normalcy and consistency for our students that is desperately needed, especially during moments such as this.

You moved fairly quickly from being a Peabody student to being on staff. Does knowing what students are doing help you with your role here?

I love working with the students. I get the opportunity to help students figure out how they can realize their artistic pursuits and all the things that go into them. It's not just discussing the music making but also having those logistical conversations and making [the students] more aware of what goes into planning an event. When they go out into the world after they graduate, they're going to be starting their own concert series, opera companies, artist management groups, or land that orchestral job. Many of them are going to live multifaceted lives, and they're going to have to think about how all of these things logistically fit together both on stage and behind the scenes.

I'm someone on the other side of the table that gets them. I've had a couple instances where students have come into the office and they're frazzled, they're nervous, they're scheduling their degree recital, and it is a big deal. If they're an undergrad, this is what they've worked toward for four years.

I've had one or two instances where they say, You don't understand. I have no problem saying, You know what? I was in your seat however many years ago. And then they're like, Wait, you're a musician? I love that because a lot of staff members at Peabody are still performing musicians. There have been instances where I've been in an opera chorus or a soloist at a church gig and I've shown up alongside current students and they're like, Hey wait, you're a singer, too? Yes, I'm a singer, too.

I enjoy being that person on the other side of the table who can let them know: It's OK. We get you. We get what you're doing. We get what your lives are like. And we get what your lives are going to be like after you graduate because we're doing it, too. That aspect of it makes me happy. I love being that person who helps them through this process, reminding them that this is not the only performance they're going to have to plan. This is just the beginning.

All public events at Peabody have been canceled due to the coronavirus pandemic, but you can still hear beautiful music produced by students and faculty. Check out Peabody Artreach, a curated collection of resources to help performing artists and arts lovers weather the COVID-19 pandemic.