Jim Stimpert has so many stories about Johns Hopkins

As senior reference archivist at the university, he oversees more than 1,000 historical collections—and can get you the answers you need 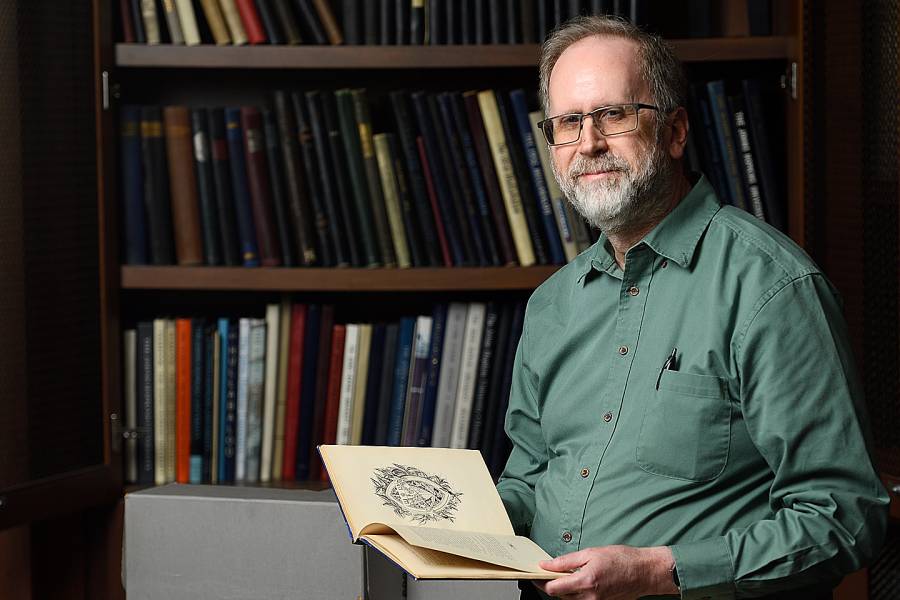 Image caption: Jim Stimpert first landed in archival work as a graduate student at Kent State and found his way to Johns Hopkins in 1983.

A history lover his whole life, Jim Stimpert first landed in archival work as a graduate student at Kent State. It was meant to be a summer job but, as he recalls, "I very quickly realized this is what I wanted for a career."

From there Stimpert found his way to the archives at Johns Hopkins University—lured to Baltimore, in part, by his passion for the Orioles. He's worked here now for 36 years, immersed in the millions of papers, photographs, and ephemera that tell the university's story. Today he is the senior reference archivist at the university's Sheridan Libraries, overseeing reference in Special Collections from his office in the Brody Learning Commons at Homewood.

Recently Stimpert sat down with Hub at Work to share details of his work and some little-known tales from the archives.

What does your job entail?

As senior reference archivist, my job is to answer questions relating to the history of Johns Hopkins University and make materials available to onsite researchers, as well as answer questions by email, phone, and once in a while by snail mail still. We serve the general public as well as students and administration of JHU.

I oversee reference for the University Archives, which include the official records of all the departments and offices of JHU going back to the start of the university. That includes faculty papers, oral histories, yearbooks, records of the President's and Provost's offices, minutes of board of trustees meetings going back to 1870, and the archives of SAIS. We also have numerous other collections donated to the university over the years, and records of several organizations which may or may not have a connection with the university, such as the Family and Children's Society of Maryland, the Roland Park Co., and the Lester S. Levy Sheet Music Collection. Our archival and manuscript collections number over 1,000.

I also do some teaching—lectures and Odyssey classes [this spring, he's co-teaching an Odyssey course called Johns Hopkins' Baltimore].

What kinds of requests do people tend to make of you?

Often it's photographs—people want them for their article, book, etc. We have a collection of over 16,000 images, each one individually cataloged. Now that collection has been scanned, and it's entirely available on JScholarship, the library's institutional repository.

Some people are seeking a certain collection—for example, the papers of our founding president, Daniel Coit Gilman, or of Herbert Baxter Adams, the university's first history professor and a founding figure in American historical studies.

With JHU administration, they might come to us, for example, to see how a past event was documented, or trustees might want to look at how a past resolution was worded. We can check the minutes and supporting papers.

Where are all these materials kept?

All the boxed materials, archives, and manuscripts are housed off-site in a facility called the Libraries Service Center, which is down on the Applied Physics Laboratory campus in Laurel, Maryland. It's a big, purpose-built warehouse with 30-foot-high ceilings. Our library does one van run per day, Monday through Friday, to retrieve materials as they're requested. So we tell people it's a 24-to-48-hour turnaround.

What are some interesting tidbits of Hopkins history that exist in these archives?

We have an original copy of the certificate of incorporation for Johns Hopkins University, essentially our founding document, which was approved by the Maryland legislature in 1867. It's signed by the original 12 trustees.

And something that's documented in the President's Office records: On two separate occasions, 1925 and the early 1950s, the university tried to abolish undergraduate education. The idea was to admit students in their junior year, bypassing the bachelor's degree and funneling them straight to graduate studies. The plan was actually put into effect for a couple of years until [university leadership] realized that the community was very much opposed—it was seen as elitist—and it turned out to be impractical to build a student body entirely from transfer students.

What are some of the oldest materials in the archives?

We have papyrus fragments from Egypt, collected in the early 20th century, which include bits of Homer's Iliad and Odyssey. I'm not sure how they wound up here, but they're sealed and protected between glass.

Maybe one of the oldest paper items is a small diary from the era of the American Revolution, in the 1770s. It's written by a man named Weatherburn, who kept a business ledger and diary of events going on in and around Baltimore during that time.

Any quirky stories you've come across?

Back in the 1980s, a large walk-in safe was discovered built into Gilman Hall. It had been covered by a wooden bookcase for many decades. Nobody had any idea of what was inside, but naturally everyone was curious. It had a bank-quality lock that couldn't be drilled through easily. The president of JHU at that time, Steven Muller, hosted a contest inviting students to try their hand at cracking the safe. Several individuals took him up on that but were unsuccessful, so they had to call in professionals.

The contents of the safe didn't quite live up to the hype; there were a few manuscripts and a few bottles. But it turned out there was a small collection of letters written by Confederate naval officers during the Civil War. I did some research and determined that the materials had once been on loan for a while [from the university] to the Government Printing Office when they were compiling a huge volume called The War of Rebellion: The Official Records of the Civil War. Among these letters were firsthand accounts of the Battle of Hampton Roads in 1862, aka "the Duel of the Ironclads," written by officers on Confederate ships, as well as requisitions for provisions.

How much of JHU's archives is digitized?

It's a small percentage, certainly less than 10%. But we're working on it. We try to focus on the collections that get the most use, such as the Gilman papers and the Isaiah Bowman papers [Bowman was JHU's fifth president], and our photo collection, which as I mentioned is fully available online. We also have things like The News-Letter, which has been digitized up to 1991, and the yearbook collection from 1889 through 2015.

How did you get involved in this line of work?

I've been an avid history reader going back to my youngest days. One of my uncles, who encouraged me, would buy me books on the American Civil War, and that became my primary interest for a long time—it was my focus in grad school studying history at Kent State.

During grad school I got a summer job working in the university's archives, but the archivist could see this was not just a summer thing for me. He encouraged me to go to library school so I could have a double master's.

And how did you get started at Hopkins?

My college roommate became a grad student at Hopkins in the Philosophy Department and got a job working in the archives here. One day he called me and said, "I just heard the assistant archivist is leaving, and there's going to be a vacancy. Are you interested?"

At that point I was in library school and had some archives experience. Also, I'd been planning to visit Baltimore already—I'd been a huge Orioles fan since 1969.

When I came down, I dropped into Hopkins to meet the woman who would become my future boss for what I thought was a foot-in-the-door introduction. Turns out it was a full-scale interview. A couple of months later I was offered the job as an assistant archivist, and I moved to Baltimore in August 1983.

Stepping back—how did you become an Orioles fan, all the way from Ohio?

The Orioles became my team with the 1969 World Series. They lost the series in five games, but Jim Palmer was pitching, and he became my baseball hero. So I followed the Orioles from afar, which at that time, pre-internet, was difficult because the papers in Ohio didn't exactly try to cover them.

I've heard you're a photographer. Can you tell me about that?

I've been a nature photographer since the late 1980s. I enjoy hiking with a 20-pound camera backpack, taking photos of flowers, landscapes, sunsets, and anything else in the natural world that catches my eye. I tend to prefer macro photography of flowers, both wildflowers and cultivated flowers.