This tech coordinator brings to JHU an expertise honed in theaters, classrooms, cruise ships, and a casino 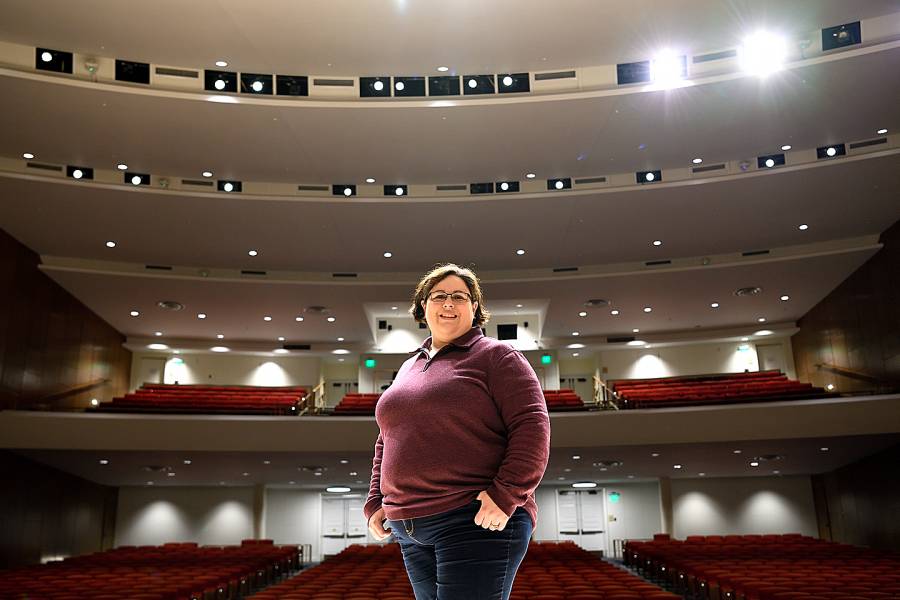 For every performance that graces the stage of Shriver Hall, you can typically find Heather Michaelson up at the top of the balcony, at work in her control booth. As tech coordinator of the 1,100-seat Homewood venue, she's in charge of making sure everything you see and hear when you're in the audience is on point.

"Anything and everything for lights, sound, and AV [audiovisual] falls under me," says Michaelson, who started the job 10 months ago.

It's a new position at Johns Hopkins, created to coincide with the recent $14 million renovation of Shriver Hall. Michaelson's equipment—including all-LED lighting, sound mixing board, projection systems, movie screens, and microphones—is state of the art.

Michaelson comes to this job with a varied background that includes theaters, classrooms, cruise ships, and, most recently, Live! Casino & Hotel. In Shriver, she's overseen everything from dance shows and The Nutcracker to symposiums and comedy.

Hub at Work sat down with Michaelson recently to chat about her winding path to Johns Hopkins, the tech and artistry behind her work, and the near impossibility of hitting the right shade of purple.

What kind of work are you doing for a typical event at Shriver?

There's really no such thing as a typical event. For any performance or speaking event that happens here—whether they need full lighting programmed or they just need a microphone—I'm taking care of that. My big thing is making sure everything is prepped beforehand, so I coordinate with event organizers.

Where are you during a live show?

For a simple show, like a speaker for example, I can be backstage, where I can control some basic lighting and sound. But if it's something more complex, I need to be in my booth upstairs and, if needed, I'll have people from KIT-CATS [the Classroom/Audiovisual Technology Support team] helping out.

How'd you get involved in this line of work?

I started doing theater in high school in San Diego and went for my bachelor's in fine arts and technical theater. Then I fell into teaching accidentally almost and really loved it. I got my master's in education from UNLV [University of Nevada, Las Vegas] and taught drama and theater tech for eight years in Las Vegas and California. 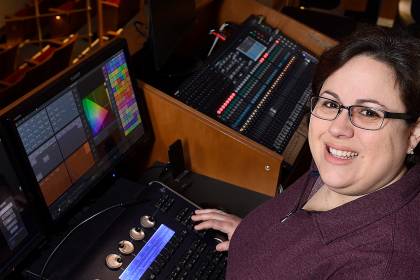 Image caption: Michaelson at the control booth on the balcony

I reached a point where I thought, Well, I'm either going to keep teaching forever, or I can go do something else for a while. So I ran off and joined a cruise ship. It just so happened that I found the opportunity to go out and see the world, running theaters for Celebrity Cruise Ships for four years.

I've seen some incredible places. I started my first cruise in Australia. Crossing the equator on my second cruise was an experience—there's a whole ceremony for that. The Baltic region is absolutely gorgeous. I have great memories of walking through markets in Turkey, overnighting in St. Petersburg, and seeing the beautiful fall colors of New England and Canada.

It's surreal to me that I can make statements like, "I don't ever need to go to Rome again" or "I've seen enough of the Caribbean" because I know those places so well. So I checked off a lot on my bucket list.

How'd you end up at Johns Hopkins from there?

After cruises I worked at the Live! Casino in Baltimore as entertainment manager, overseeing performances at Live! Center Stage and then helping to open the new event center with the hotel. A lot of different acts came through—Ken Jeong, LeAnn Rimes, Skid Row, a little of everything.

Casinos are great for a lot of reasons, but after four years I was ready for something new. I've always been connected to education and the academic world in different ways, so when the opportunity at Johns Hopkins was posted, I was like, Oh, this seems kind of perfect.

What's the most complex event you've worked on here?

Probably variety shows—so, the Orientation freshman show and SOHOP [Spring Open House Overnight Program]. It's different groups with different needs on stage: a dance group, then an a cappella group, then a comedian, etc., so there's a lot of things happening at once.

Some shows, I design the lighting for the whole thing, like with The Nutcracker this winter. They give me information. For example, costume color is very important—more than anything else. Because if everyone on the stage is blue, you don't want only blue lights on them, or it'll wash everything out.

As the groups start to know me, it's moving more toward me doing more of the lights. But I want whatever's best for their show.

What kind of artistry is involved with the lighting?

Lighting is all about mood and emotion. There was a quote repeated a lot at my college: The director asked someone, "Can I have a happier green?" And so there truly is that aspect of, What mood is this conveying? For a battle scene, you're not going to put a bright happy pink on that stage, or a light, soothing blue; you're putting in reds and purples. It's like painting in light in some ways. And you add further dimensions with contrasting colors, and intensity, and shadows.

Purple is the hardest color to create onstage. If you think of the spectrum of color, at the very bottom is UV light, essentially purple. So because it's such a small part of the spectrum, it's difficult to get a good purple. I feel bad for whoever's in charge of the lights at Ravens stadium because it's just a tough color.

What are some considerations with sound?

Sound is one of those things where every single person in the audience is going to have a different opinion. Everyone has different ears, different levels of hearing. If I mix a show, it's going to sound different to everyone in the room. It's subjective in a way that nothing else is.

What's the most difficult moment you've had in a production?

While I was teaching high school in Las Vegas, we did Seussical, the musical. There's flying in that show. The Cat in the Hat flies, and monkeys fly. Like a Peter Pan–type thing. So backstage, you're pulling people with ropes, using your weight to help guide them.

And at one point during a performance, there's a student onstage playing a monkey, and he's supposed to jump off a box and fly in the air. But backstage, one of the ropes got twisted, and I grabbed the wrong side of it. So this student jumped off the box and went crashing to the floor. Fortunately, this was only about 5 feet, so he was fine. Bruised but fine. But in the process, I broke two of my fingers. They're still slightly crooked to this day.