An acclaimed recitalist, recording artist, teacher, and collaborator, pianist Steven Spooner will join the faculty of the Peabody Conservatory of the Johns Hopkins University beginning in the 2020–21 academic year. 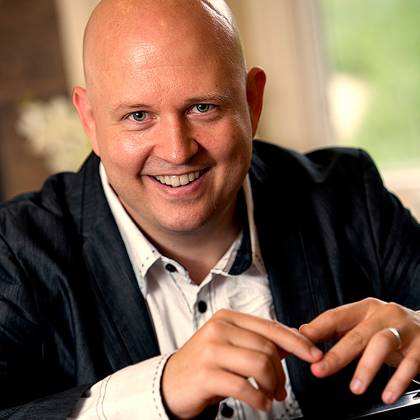 Passionately devoted to the solo recital as a platform for innovation, Spooner has been engaged at prestigious venues such as the Salle Cortot in Paris, the Shanghai Concert Hall, Budapest's Great Hall of the Liszt Academy, New York's Carnegie Hall, Rome's Santa Cecilia, and Singapore's Esplanade.

During past seasons, he has reinvented the solo recital by allowing audiences to vote on the spot for one of five programs he has prepared, and his programs often feature his own arrangements and compositions. This season he will perform the cycle of Beethoven sonatas in a series of lecture-recitals in addition to duo performances with renowned pianist Sergei Babayan.

Spooner has released more than 30 recordings on the Naxos, A Life of Music, and other labels, including a 2016 project of 16 CDs honoring his heroes called Dedications, which was met with enormous critical acclaim. A prizewinner at each of the seven international piano competitions he has entered, Spooner is also an active collaborator and performs with a diverse and distinguished list of musicians.

He has studied at the Moscow and Tbilisi conservatories in the former Soviet Union and at Indiana University. His teachers have included Earl Wild, Nodar Gabunia, Karen Shaw, Leonard Hokanson, and Edmund Battersby, and he has coached extensively with Tatiana Nikolayeva, Viktor Merzhanov, Dalton Baldwin, and Emile Naoumoff.

Spooner has served as guest artist-in-residence at Paris Conservatory Summer Sessions and has been appointed to the artist faculty of many leading summer festivals. He was recently appointed artistic director of the Chicago International Music Competition and Festival. Increasingly in demand for his master classes, Spooner has served on the piano faculty at the University of Kansas, and his pupils have been named winners at important international and national piano competitions and enjoy performing and teaching careers of their own. He is a Steinway Artist.

Give Me Back My Fingerprints by Composition Professor Du Yun was named one of The New York Times' 25 Best Classical Music Tracks of 2019. It is performed by violinist Jennifer Koh.

Sarah Hoover, associate dean for innovation, interdisciplinary partnerships, and community initiatives, was selected by Musical America as one of the Top 30 Worldwide Professionals of the Year. The magazine cites Hoover's work to break new ground at the intersection of performing arts and medicine and her development of Peabody's pioneering Breakthrough Curriculum as reasons for her inclusion in the list.

Grammy nominations shined a light on three Peabody faculty members this year. Matthew Stevens, Jazz, was featured on Esperanza Spalding's 12 Little Spells, nominated for both Best Jazz Vocal Album and Best Arrangement, Instruments, and Vocals. Composition faculty artist Christopher Cerrone's work The Pieces That Fall to Earth, performed by Christopher Rountree and Wild Up, was nominated in the Best Chamber Music/Small Ensemble Performance category. Harold Meltzer, Composition, was nominated in the category Best Classical Compendium for his album Songs and Structures. The 62nd Grammy Awards ceremony will be held Jan. 26.