The university's undergrad work-study program led her to the JHU Press, where she's now an associate editor 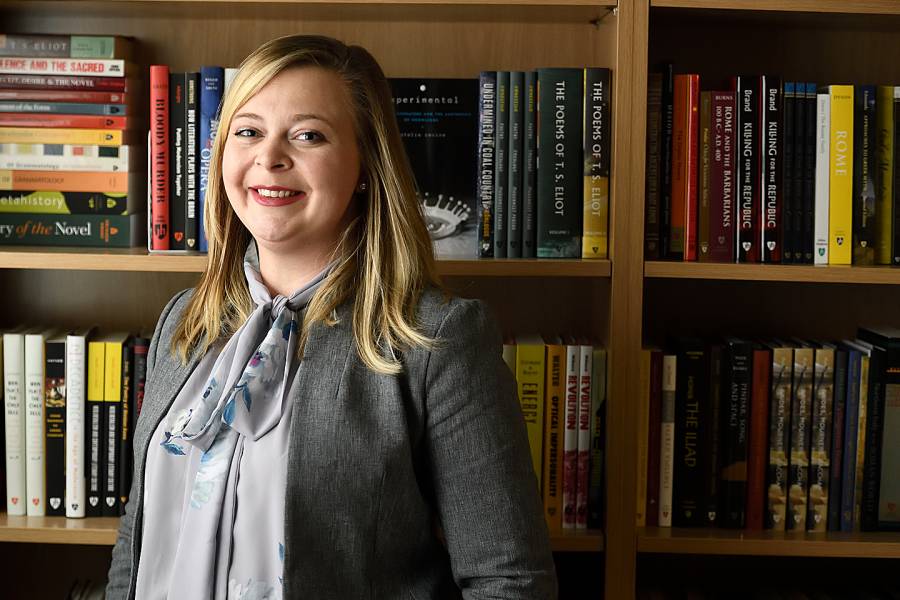 It's not unusual for people outside of the academic world to be confused about what, exactly, someone they know does every day at work there. For Catherine Goldstead, an associate editor at Johns Hopkins University Press, even relatives with advanced degrees have been wrong about the nature of her work.

"Some people think I work in communications," said Goldstead on a recent morning at Charmington's coffee shop on Howard Street, a half mile from the Homewood campus. "My brother-in-law has a PhD from Hopkins in chemical engineering and thought I worked in the department that binds dissertations before they're filed in the library."

There are others, Goldstead said, who don't know that Johns Hopkins publishes books and journals despite having done so for the past 141 years as the oldest continuously operating university press in the country.

A confessed book nerd who worked at her local library in high school, Goldstead earned a dual Bachelor of Arts in English literature/Spanish language and literature in 2010 from JHU. In 2013, she was awarded a Master of Arts in the humanities at the University of Chicago.

The daughter of architects, she is one of eight acquisition editors at the Press, whose Books Division produces 160 new titles each year. The Press, housed in the original Saints Philip and James Catholic Church building at 2714 N. Charles St., has an overall staff of 150 or so, including the Journals Division, Project MUSE, and the Hopkins Fulfillment Service.

What do you do to get books out into the world?

I'm an associate editor; I acquire manuscripts for publication in literary studies and the ancient world. I get hundreds of queries a year from authors and also [solicit] proposals. I look over the proposal and a sample chapter and see if it's a good fit for us.

I put together a profit and loss statement, and the manuscript goes through peer review. I have a half-dozen or so trusted people I refer projects to, or who suggest ideal reviewers.

Sometimes you get two very different reviews, one positive and one negative, and I have to whittle away at the tone of the report to get to the heart of what's really being said.

It happened recently on a manuscript about Victorian literature. Both reviewers offered substantial support for their positions%mdash;one had a good feeling about the manuscript, the other less so. That manuscript is still in development.

The problem is rarely about the scholarship; it's usually how best to reshape the material. So I have to step back and ask myself, What can the author do to fix this? while still doing right by the book. That's when I pick up the phone and talk to the author.

A negative review is as much a disappointment to me as [it is] to the author. I think I've rejected less than 5% of manuscripts after a bad report; we always try to rework the material to avoid that.

A big part of my job is interpreting [the disparities] between what the author has written and the peer reviewer's report for my colleagues when I present the book at editorial meetings.

Do you have to know more about the subject than the author does?

Not really. I'm a generalist.

How did you get your job?

During freshman orientation [at Hopkins], I applied for work-study on campus and interviewed with the Press' Marketing Department. The job was mostly clerical, but I enjoyed the people I worked with. That internship continued across four years to graduation. By my senior year, our former marketing director [Becky Clark] helped arrange informational interviews [at the Press] for me to learn more about editing and other sides of publishing. I'm a big advocate for the work-study program—it helps students get a window into a future career.

What are your goals at the Press?

I want to further refine the calling card for the kinds of books I publish. We're beginning a strategic assessment of the Press to determine a metric for success for each of the fields in which we publish.

You're young, just 31. Will you see the end of print in your lifetime?

I don't think so. People were talking about the death of print long before e-books came out. People really love to hold a book. I believe in the printed word.

As a native of Wheaton, Illinois, is there a JHU-published book that helped you understand the Baltimore area?

Before my [current] focus, I edited a cookbook by [Gertrude's executive chef] John Shields called The New Chesapeake Kitchen. When John was doing his research, he met a woman and while they were talking about recipes he asked about Chesapeake cuisine. She said, "Cuisine? We don't have a cuisine. This is just the way we eat."

In the cold academic world of publish or perish, have you ever been offered a bribe to accept a manuscript?

[Laughs] A woman brought me a doughnut once at an MLA [Modern Language Association] meeting in Philadelphia. She had a proposal for a book on the literature of the Enlightenment. We didn't publish it, but the doughnut was good.

JHU Press discounts: Johns Hopkins faculty and staff always receive 25% off when ordering books directly from the Press; use the promo code HJAY online or by calling 800-537-5487. And from now through Jan. 15, all holiday shoppers get 40% off purchases plus free shipping by using the code HHOL.