As a supervisor and dispatcher for the Blue Jay Shuttle service, she gets a thousand people where they need to be 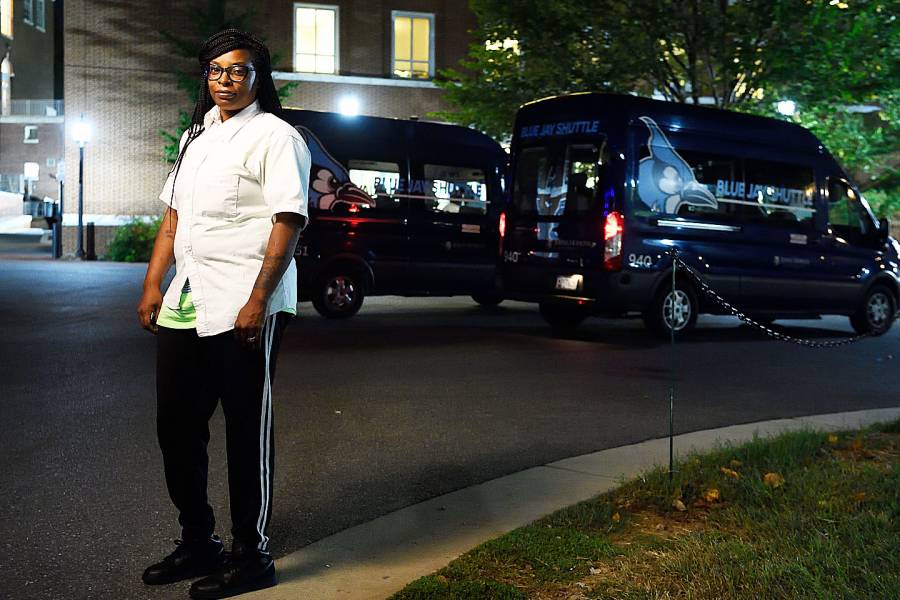 If you've ever clambered onto a nighttime Johns Hopkins University shuttle for a quick ride across the Homewood campus or requested a curb-to-curb Night Ride after a late night at work, you might have settled into your seat with a moment of appreciation for a safe and reliable ride. You may, however, have given little thought to all that happens behind the scenes to ensure JHU vans are where they need to be to get students, faculty, and staff to their destinations. Here's your chance to find out.

We spoke with Kiayana Leach, who is one of the 43 Blue Jay Shuttle service employees (plus six student co-workers) helping to ensure the shuttle service runs smoothly. It's no small job—operating from 5:30 p.m. to 3:45 a.m. seven days a week, the shuttle service averages 1,000 riders a night (on its busiest night that number jumped to more than 2,000). The service includes the fixed Homewood shuttle route, the Brody Shuffle, and the request-only curb-to-curb Night Ride, which serves Homewood and the close vicinity, as well as the Peabody Institute.

How long have you been with Blue Jay Shuttle service, and what's your current job?

I've been here for two years. I'm a supervisor and dispatcher. So, with dispatching, I answer calls, make sure all of our route drivers leave on time and are on their route. I also help make sure the Peabody and Homewood Night Ride drivers are picking up their passengers, and arrange for a Lyft if the wait time is longer than 10 minutes. As a supervisor, I'm making sure all our drivers are in vehicles and logged on so we are ready by 5:30 and then basically I just have to be prepared to do all the jobs in one—we drive, we dispatch, we do it all.

So sometimes you're behind the wheel?

Yes. I don't drive as often as I used to, but I started out as a driver. About three months in I became a dispatcher, so I'm mostly needed in the office now. But I like driving because I'm a bit of an introvert and it helps me to talk to people more and to talk to people of different walks of life. For the most part the students are awesome. Even if they're coming from a party—they're a little more animated, but they're really nice.

You must know the campus really well by now.

I do. I'm from Baltimore, but coming here I saw a lot of places that I had never seen before. Like, I didn't know about Hampden. I would ride past Falls Road all the time, but I never went to Hampden, so when I did, I was like, Wow, all these restaurants!

That's tough. Do you have a trick for sleeping during the day?

I have the dark curtains, and once everybody has gone to school I can pretty much sleep. But I'm really busy at home, so my days off are sacred. When I'm off, I'm off!

I like people. I like being around people and training people. I really have a passion for that. And it's really cool to come to work with the team that we have. I've been at jobs where I didn't have that—where people didn't know each other—but here we're like a little family. Dysfunctional at times but—no, I'm just kidding.

I would just say the flow of calls. If we're having a really busy day, it's a lot of work at once. You have to answer the calls, answer the radio for the drivers, you have to make sure the driver is on location in the right spot. When it's not busy, it's pretty much a breeze.

What was the most rewarding problem you've solved?

When our system crashed—this was just [last month]—and we had to basically go manual with everything. We use an app [TransLoc] to track our vehicles and wait times, and everybody is used to using the app now, so when it crashed, it was difficult. We got through it, though.

Are there times the vans don't run?

Not too often. We've been out in the snow, ice, rain, as long as it's not really hazardous. If all the drivers are on the road and it gets to raining really bad, we'll just tell them to pull over and wait it out. We let our callers know the weather is bad, just give us a couple of minutes.

Where are people going when they call for Night Ride?

All different places. They frequent Jong Kak, it's a Korean restaurant, and the Crown. And Giant! Giant is No. 1. They'll go to Giant 3:30 in the morning. At any time a driver can just be going on their break and pull into Giant and people come running to the vehicle.

Is there anything you think students, faculty, and staff might not realize about the shuttle service?

Just that we don't control who gets what ride. They tend to think we're controlling where certain drivers are going, but it's not us, it's a system. And also, sometimes people don't realize that Night Ride is a shared ride. They think it's going to take them directly to where they're going and don't realize the driver may make stops. We have the Brody Shuffle that departs from Brody Learning Commons, so if we get a call from anywhere close [to that building], we'll have the passenger get on the Brody Shuffle because it's actually quicker. They don't always know that, but it's quicker.

What kind of feedback do you get from people calling in for a ride?

They're always so grateful, especially when you're sending a Lyft, which we do when the wait time gets longer than 10 minutes.

When you're not dispatching or driving the van, what do you love to do?

I love to have get-togethers at my house. I love my family around. I have three children and custody of my 4-year-old grandson, so when I'm off, I'm usually doing things with them like taking my grandson to museums. He's a dinosaur fanatic, so we'll go to the Smithsonian to see the dinosaurs.