Read about his yearlong assignment, plus more news about School of Medicine faculty

Joseph Sakran, director of emergency general surgery and an assistant professor of surgery, has been named to the 2019–20 class of Robert Wood Johnson Foundation Health Policy Fellows by the National Academy of Medicine and the Robert Wood Johnson Foundation. Beginning in September, Sakran and five other health professionals will spend a year in Washington, D.C., working on health-related legislative and regulatory issues with members of Congress or the executive branch. 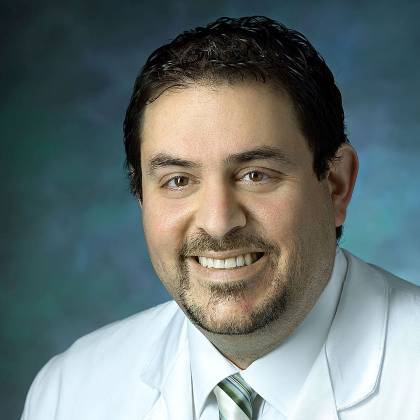 The fellows were chosen in a national competition for highly accomplished health and behavioral/social science professionals who have an interest in health policy. Their experiences in Washington are expected to enrich their understanding of federal policy formation and how federal and state governments relate to the mission of their home institutions and local communities.

After their Washington assignment, Sakran and the other fellows will continue to receive support to sustain their development as health policy leaders.

Sophie Cai, a resident at the Wilmer Eye Institute, has received a HEED Fellowship from the HEED Ophthalmic Foundation to support her vitreoretinal fellowship at Duke University. Established by Thomas Heed in 1945, the foundation provides funding to assist young men and women in pursuing postgraduate studies in ophthalmology. Professors Peter McDonnell, Neil Bressler, and Peter Gehlbach nominated Cai for the award.

Harry "Hal" C. Dietz III, the Victor A. McKusick Professor of Genetics, director of the William S. Smilow Center for Marfan Syndrome Research, and a faculty member of the McKusick Nathans Institute of Genetic Medicine, has been awarded the 2019 Mentorship Award by the American Society of Human Genetics for his commitment to mentorship in the field of human genetics research. Dietz has mentored more than 50 students and professionals, 10 of whom have received the ASHG/Charles J. Epstein Trainee Award for Excellence in Human Genetics Research. As the recipient of the Mentorship Award, Dietz received a $10,000 prize.

Amanda Fader, an associate professor of gynecology and obstetrics and director of the Johns Hopkins Center for Rare Gynecologic Cancers, led research that was called one of the five top oncology advances of 2019 by the American Society of Clinical Oncology. The research showed that the drug trastuzumab extended the length of time to tumor progression by four to eight months for women with HER2+ advanced or recurrent uterine serous carcinoma. The study resulted in the development of new clinical guidelines within the National Comprehensive Cancer Network for treating this cancer subtype.

Alejandro Garcia, an assistant professor of surgery and surgical director of the ECMO (extracorporeal membrane oxygenation) Program, has been named a Jay Grosfeld, M.D., Scholar by the American Pediatric Surgical Association Foundation. Garcia will receive $25,000 for his research titled "Improving Reperfusion Injury in Pediatric Cardiac Arrest Using a Porcine Model of ECPR."

Oren Gordon, a fellow in the Department of Pediatrics, has received a fellowship grant from American Healthcare Professionals and Friends for Medicine in Israel. The fellowships were established in 1951 to help train Israeli physicians in specialty care; the program continues today with the awarding of supplemental fellowship grants to gifted Israeli physicians to help them in the advancement of their education at prestigious medical centers in the United States and Canada. After finishing a residency program in general pediatrics at Israel's Hadassah Medical Center, Gordon was accepted to a three-year fellowship program in pediatric infectious diseases at Johns Hopkins. His APF fellowship grant will provide research support as he deepens his expertise and experience in infectious diseases that afflict children.

Rachel Salas, an associate professor of neurology and director of Interprofessional Education and Collaborative Practice, has been named the 2019 Burton Sandok Visiting Professor of Neurological Education at the Mayo Clinic. Mayo's Department of Neurology each year coordinates a rigorous search to evaluate nominations from neurology departments across the country. The award recipient is chosen for his or her accomplishments and passion in the field of neurology, medical education, and research. Salas was invited to spend two days at the Mayo Clinic, where she presented a sleep lecture for the first-year neurology course and discussed sleep cases in a resident and fellow didactic session. In addition, she rounded on the neurology wards and provided Grand Rounds to the Department of Neurology on precision medicine at the Johns Hopkins Center for Sleep. Salas also has been named a Macy Faculty Scholar; her responsibilities include creating and implementing the Interprofessional Exemplar Program, a certificate program to recognize, develop, and nurture faculty as interprofessional collaborative practice role models.

Rebecca Same, a fellow in the Division of Pediatric Infectious Diseases, has received a Jonathan Freeman Scholarship from the Society for Healthcare Epidemiology of America. The scholarship promotes the training of outstanding infectious disease fellows who demonstrate interest in health care epidemiology.

Sister Karen Schneider, a pediatrician and assistant professor of pediatrics, received an honorary Doctorate of Humane Letters at the May commencement exercises of Saint Joseph's College of Maine. Schneider has been recognized for her international medical work in the service of children. She coordinates the Pediatric Tropical Medicine elective, for which she supervises clinical experiences for residents in several countries, lectures on tropical medicine to pediatric residents, and updates out-of-country physicians and health workers on medical topics. She has completed more than 80 medical mission trips.

Robert Shochet, an associate professor of medicine and director of the Colleges Advisory Program, was named a winner of the 2019 American Board of Internal Medicine Foundation's Trust Practice Challenge. The challenge identifies and promotes practices that foster trust in health care. Johns Hopkins' Colleges Advisory Program provides every medical student with a dedicated, long-term mentor, enhancing their personal and professional growth and career development. Shochet presented the program as a trust practice in a plenary meeting titled "Innovations: Practices that Build Trust" at the ABIM Foundation's 2019 forum in August.

Mudiaga Sowho, a sleep and genomics fellow, has been awarded one of two 2018 Victor McKusick Fellowships from the Marfan Foundation. Sowho earned a $150,000, two-year research grant for his study titled "Hedodynamic Response to Upper Airway Obstruction in Marfan Syndrome."

Jennifer Elizabeth Thorne, a professor of ophthalmology at the Wilmer Eye Institute and chief of the Division of Ocular Immunology, was one of four winners of 2019 grants for researchers who want to conduct big data research in ophthalmology and blindness prevention. The granting organizations were Research to Prevent Blindness and the American Academy of Ophthalmology. Thorne will investigate whether uveitis patients have worse surgical and visual outcomes compared with cataract patients without uveitis. She will then use IRIS Registry data to understand the factors that contribute to both better and worse visual outcomes in people who have uveitis, including whether it's beneficial to use corticosteroids to prevent surgical complications.

Elizabeth Tucker, an assistant professor of anesthesiology and critical care medicine, has received a 2018 Hartwell Individual Biomedical Research Award from the Hartwell Foundation, which provides funds for early-stage research projects that have not yet qualified for funding from traditional sources. Tucker was one of 12 investigators at 10 institutions who earned a 2018 award, which provides support for three years at $100,000 direct costs per year. The award-winning proposals represented innovative and cutting-edge technology in medicine and biomedical engineering research that will potentially benefit children. Tucker's proposal was titled "Host-Targeted Theranostic Dendrimer to Monitor and Treat Meningitis."

King-Wai Yau, a professor of neuroscience and ophthalmology, is the recipient of the 2019 Beckman-Argyros Award in Vision Research for his transformative contributions to vision research, spanning more than 30 years. Yau's pioneering research on the function of the retina has led to the molecular and cellular understanding of circadian rhythms and several forms of hereditary blindness. The Beckman-Argyros Award is given by the Arnold and Mabel Beckman Foundation board of directors.