In the footsteps of Elvis, the Beatles, and Frank Sinatra 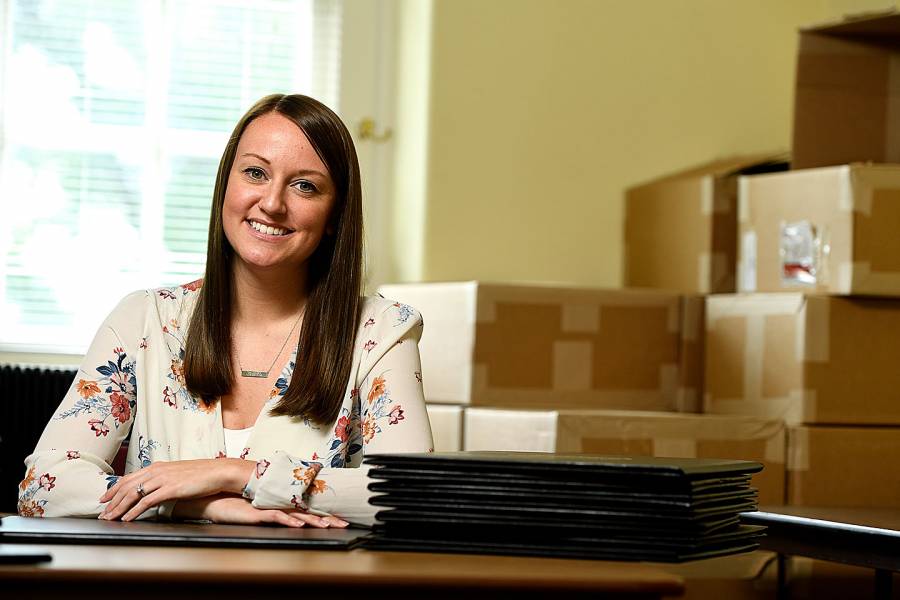 It is, says Amanda Bauer, like orchestrating the biggest birthday party in the world. One in which you don't even know who is going to show up until the last moment. And a procession!

She's talking about the day that Johns Hopkins students and their families work hard and sacrifice for—Commencement. As associate registrar for operations and student support services, Bauer is one of the chief organizers of the ceremony to be held downtown, at Royal Farms Arena, on May 23.

To the ceremony are invited some 9,000 campuswide graduates representing all nine of the university's academic divisions—from musicians to molecular biologists—undergraduates, those receiving master's degrees, and the select scholars who will don the hard-earned academic hood that symbolizes a doctorate.

The work involved in pulling off a spectacle in which more than a thousand newly minted graduates walk across the same stage where Elvis, the Beatles, and Frank Sinatra performed is more than a hard day's night. It's a detail-laden task many months in the planning.

"Right now, we're wrapping up final edits of the Commencement program, sorting reader cards, and preparing diplomas for distribution," said Bauer about a week before graduation. "Then we'll review all clearances for degree conferral and send one final reminder with lineup instructions to the eligible candidates."

About 1,300 of the eligible graduates are expected to attend. That number, she says, is in keeping with previous turnouts.

"We truly don't know exactly who is going to show up," says Bauer, who has worked in higher education for the past decade and was involved in planning commencements in each of her previous jobs. She has been at JHU since January 2016.

"The very first time I did it [here], it was nerve-wracking—we started from scratch," she says, noting that her rookie year with JHU was when the ceremony was moved from the Homewood campus to the arena at East Baltimore and Howard streets. "Each year, it gets a little easier."

Bauer's Commencement "to do" list takes shape year-round, with preparation beginning not long after the previous graduation is in the books.

The work includes regularly scheduled meetings, as early as November, to discuss Commencement; collecting candidate names, plus those of awards and honors recipients, from all departments and divisions; and putting together and editing the program.

And—of supreme importance, since that's what it's all about—ordering thousands of diplomas, each embossed with the name of a graduate. Not to mention the logistics of seating and then lining up thousands of people who will be given those diplomas with a congratulatory handshake, many of whom are giddy, anxious, and searching for loved ones to wave to in the crowd.

"We line [the graduates] up first by their division, then by the degree program, and then by the major," she says.

One of the benefits in holding Commencement at the arena, says Bauer (who is also responsible for transcripts and verifications) is its capacity. With seating for 14,000—no ticket required; first come, first served—there is plenty of room for graduates, their families, and their friends.

The task of pulling off a memorable event is accomplished by working closely with the university's Office of Special Events. It includes the help of about 40 volunteers, along with 50 faculty and staff marshals who keep the procession moving smoothly. "It truly takes a village to make this a successful event each year. This enormous undertaking could not be possible without the helping hands of our faculty, staff, and volunteers," Bauer says.

Doors will open at noon with candidate lineup beginning at 12:30 p.m. Before the crowd is formally welcomed to the event, videos of campus life and various JHU activities will be shown on the arena's jumbo screens while guests wait for the ceremony to begin.

This year's Commencement speaker is Jeffrey Goldberg, editor-in-chief of The Atlantic magazine. Goldberg, who has interviewed former U.S. President Barack Obama five times, is the author of "The Obama Doctrine," a magazine piece focusing on the foreign policy of the 44th president.

For details about the 2019 Commencement ceremony and related activities, read "Your Complete Guide to Graduation at Johns Hopkins University" on the Hub. 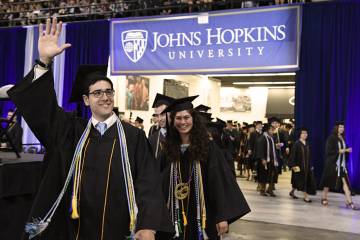 Your guide to graduation

Published May 13, 2019
An overview of the universitywide Commencement ceremony May 23 and how to celebrate the Class of 2019