Read about the current Penn Medicine executive, plus news of recent faculty achievements 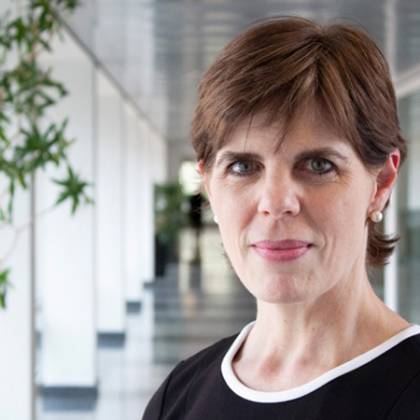 Sawyer brings more than 30 years of experience to the role. She is currently the chief marketing officer and vice president of business development for Penn Medicine in Philadelphia. In that position, she leads strategic marketing for Penn's health system and alliances, working on branding, marketing strategy, customer engagement, and growth. She also is a lecturer at the Wharton School at the University of Pennsylvania.

Sawyer received her bachelor of arts in foreign service and international politics from Penn State University.

Lawrence J. Appel, a professor of medicine and director of the Welch Center for Prevention, Epidemiology and Clinical Research, has been named a Distinguished Scientist by the American Heart Association. The designation honors AHA members who have made extraordinary contributions to cardiovascular and stroke research, particularly advancing the understanding, management, and treatment of cardiovascular disease and/or stroke.

Trinity J. Bivalacqua, an associate professor of urology, has received the Gold Cystoscope Award from the American Urological Association. The award is presented annually to a urologist distinguished by outstanding contributions to the profession within 10 years of completing residency training. Bivalacqua was honored for innovative translational research and significant contributions to the fields of sexual dysfunction and urologic oncology. He joins a list of distinguished Johns Hopkins Medicine alumni who have won the award.

Andrew M. Cameron, chief of the Division of Transplantation and professor of surgery, has been awarded a National Institutes of Health Program Project Grant of $8.2 million over five years in support of a project titled "Multidisciplinary Approach to Study of Patients With Severe Alcoholic Hepatitis Undergoing Liver Transplantation." The goals of the project include characterizing and optimizing the use of early liver transplantation for severe alcoholic hepatitis and defining public and provider sentiments regarding the use of limited resources for patients with severe alcoholic hepatitis.

H. Ballentine Carter, a professor of urology, has received the Eugene Fuller Triennial Prostate Award from the American Urological Association. The award is given once every three years to an individual who has made outstanding contributions to the study of the prostate gland and its associated diseases. Carter received the award specifically for his work in PSA screening and surveillance.

Tae Hwan Chung, an assistant professor in the Department of Physical Medicine and Rehabilitation, has been named to the Medical Advisory Board of the Myositis Association. A physiatrist, Chung specializes in investigating and developing rehabilitative treatments and therapeutic exercise programs for patients with neuromuscular diseases, such as myositis. He developed and runs a multidisciplinary rehabilitation clinic with the Johns Hopkins neuromuscular rehabilitation team, which includes physical, occupational, and speech therapists.

Jeanne Clark, a professor of medicine and director of the Division of General Internal Medicine, has been awarded the inaugural Elizabeth and Emily Blackwell Award for Outstanding Contributions to Advancing the Careers of Women in Medicine by the American College of Physicians, a national organization of internal medicine physicians.

Sonye Danoff, an associate professor in the Department of Anesthesiology, has been named to the medical advisory board of the Myositis Association. Danoff is a distinguished pulmonologist specializing in interstitial lung disease, a serious condition for many myositis patients that causes scarring in the lungs.

Rebecca Gottesman, a professor of neurology in the Cerebrovascular Division, is the recipient of the 2019 Stroke Research Mentoring Award from the American Stroke Association. Gottesman primarily conducts research as part of the Atherosclerosis Risk in Communities study. Her research, funded primarily by the National Institutes of Health, focuses on the vascular contribution to cognitive impairment and dementia, including Alzheimer's disease.

Boris Gramatikov, an assistant professor of ophthalmology at Wilmer Eye Institute, has received the 2018 Meritorious Award in Continuing Education from the Educational Board of the Institute of Electrical and Electronics Engineers. Gramatikov received the honor "for his sustained contributions and leadership in continuing education and establishing the Continuing Electrical Engineering Education program in IEEE Region 2," which comprises seven Eastern states.

Robert S.D. Higgins, the William Stewart Halsted Professor of Surgery and director of the Department of Surgery, has been elected president of the Society of Thoracic Surgeons. Higgins, a heart-lung transplant surgeon who also is surgeon-in-chief of Johns Hopkins Hospital, said of his new role, "Our responsibility is to make our specialty relevant and exciting for the next generation, while also honoring the past and creating a sustainable future."

Ralph Hruban, a professor of pathology, has been named by expertscape.com the world's top expert in pancreatic neoplasms, which are tumors that can give rise to cancer in the pancreas. Expertscape is a website that "objectively ranks people and institutions by their expertise in more than 26,000 biomedical topics." Hruban received this honor for his pre-eminent contributions to the understanding and treatment of pancreatic cancer.

Pamela Johnson, vice chair of quality and safety in the Department of Radiology and associate professor of radiology and radiological sciences, and her team received a Teaching Value Innovator Award from the Costs of Care 2018 Value Challenge. The team designed a full-day continuing medical education program that reviews the appropriate use of imaging exams, lab tests, medications, transfusions, and other treatments. The Costs of Care 2018 Value Challenge is a national search aimed at recognizing the most promising ideas to improve the safety, experience, and affordability of American health care. The Teaching Value Innovator Award recognizes projects that focus on improving medical education curricula around delivering high-value care.

Thomas V. Johnson, a glaucoma fellow at Wilmer Eye Institute, has received a 2018 Tuggle Community Excellence Award from the Johns Hopkins Bloomberg School of Public Health for his work with the Sight Savers Community Vision Program, which he co-founded. The organization is composed of trained medical students and supervising ophthalmologists who perform free vision screening in East Baltimore and provide follow-up eye care free of charge. The award is named for the Rev. Melvin B. Tuggle II, a lifelong East Baltimore resident who created strong partnerships to address health needs in his community.

Frank R. Lin has been promoted to the rank of professor in the Department of Otolaryngology-Head and Neck Surgery.

Dale Needham, a professor in the Department of Physical Medicine and Rehabilitation, is one of 80 new members of the Council of the American Society for Clinical Investigation, an honor society of physician-scientists, whose job is to translate findings in the laboratory to advancements in clinical practice.

Maria Oliva-Hemker, a professor of pediatrics, has received the Crohn's & Colitis Maryland and Southern Delaware Foundation's 2018 Excellence in Healthcare Award. The honor acknowledges Oliva-Hemker's commitment to her pediatric patients and dedication to researching a cure for Crohn's, colitis, and inflammatory bowel disease.

Pradeep Y. Ramulu has been promoted to the rank of professor of ophthalmology.

David A. Rini has been promoted to the rank of professor in the Department of Art as Applied to Medicine.

Jeffrey Rothstein, director of the Robert Packard Center for ALS Research and professor of neurology, is part of a two-member team that will receive a $1 million Collaborative Science Award over three years from the Chan Zuckerberg Initiative (Neurodegeneration Challenge Network). The network is an interdisciplinary collaborative initiative that aims to increase understanding of the fundamental biology of neurodegenerative disorders. Rothstein will collaborate on a research project titled "Investigation of Nuclear Pore Complex Alterations in ALS/FTD" with Gene Yeo, of the University of California, San Diego.

Corinne Sandone has been promoted to the rank of professor in the Department of Art as Applied to Medicine.

Oliver Schein, a professor of ophthalmology at Wilmer Eye Institute, has received the 2018 Armstrong Award for Excellence in Quality and Safety from Johns Hopkins Hospital for his commitment to optimizing patient outcomes, eliminating preventable harm, demonstrating exemplary performance on recognized clinical quality and safety measures, and improving the patient experience.

Cynthia Sears, a professor of medicine and oncology, has been awarded the Harriet P. Dustan Award for Science as Related to Medicine by the American College of Physicians, a national organization of internists. The award recognizes outstanding work in science (nonclinical or clinical, biochemical, biological, physical,or social) as related to medicine.

Aparna Shah, a postdoctoral fellow in the Department of Neuroscience, is the recipient of a NARSAD Young Investigator Grant from the Brain and Behavior Research Foundation. One of the highest distinctions in the field of mental health research, NARSAD grants provide support for promising young scientists conducting neurobiological research. Recipients get two-year awards of up to $35,000 per year. Shah is studying the link between microRNA molecules, which are involved in regulating gene activity, and the response to stress.

Barry S. Solomon has been promoted to the rank of professor of pediatrics.

Aaron A.R. Tobian, a professor in the Department of Pathology, is one of 80 new members elected for 2019 to the Council of the American Society for Clinical Investigation, an honor society of physician-scientists.

Sheila K. West, a professor of ophthalmology at Wilmer Eye Institute, has received the 2018 Al Sumait Prize for Health, given by the State of Kuwait. She was awarded the prize in recognition of her research focused in Africa on ways to improve trichiasis surgery outcomes and eliminate blinding trachoma. Her work has contributed to the control of blindness for children and adults.

T.-C. Wu, a professor of pathology, has received the 2019 Harrington Scholar-Innovator Award from Harrington Discovery Institute at University Hospitals in Cleveland. The 2019 Scholar-Innovator class represents a portfolio of drugs-in-the-making with potential to significantly improve human health. Wu received his award to support his work augmenting universal immunity to combat cancer.

Jie Xiao has been promoted to the rank of professor in the Department of Biophysics and Chemistry.