The grounds manager and his crew tend to thousands of plants and 2,700 trees—plus lawns, walkways, green roofs, and rain gardens 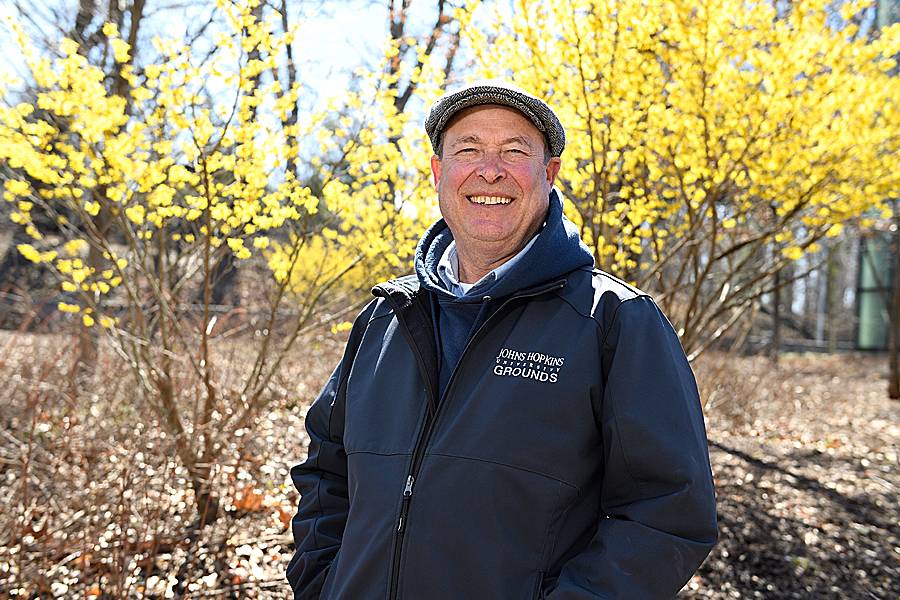 Image caption: John Beauchamp with early-blooming witch hazel, one of the thousands of plants and trees his team cares for on the Homewood campus.

As winter thaws into spring, John Beauchamp is facing the busiest season of the year at his job at Johns Hopkins. Everyone's spending more time outdoors, Alumni Weekend is around the corner, and then there's Commencement.

This is a time when the Homewood campus—which Beauchamp oversees as grounds manager—needs to be in peak form. "Everything hits at once," he says. "I'm going from snow removal to having the campus perfect." 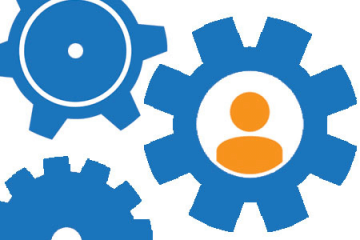 Beauchamp and his team in Grounds Services serve as caretakers of all the outdoor areas of the 120-acre campus: the quads, gardens, lawns, walkways, alcoves, and patches of forest. In the winter, they're focused on clearing ice and snow; in early springtime, there's lots of mulching and bed cleanup to prep for the season of bloom.

Beauchamp, who has a background in forest management, joined Johns Hopkins four years ago after holding a similar role at Gettysburg College. In a recent conversation with Hub at Work, he shared some details of his work.

What is your team in charge of?

Our job is to maintain outdoor portions of the Homewood campus. Everything from plants to hardscape—more or less anything outdoors. Our boundaries run to the edge of Stony Creek.

We have 16 employees, including two mechanics and one horticulturist. The work we do includes snow removal, sidewalk repair, then everything involving plants and greenery outdoors: planting, gardening, mulching, edging, weeding, mowing ... .

This time of year, what are you working on?

We're transitioning out of snow mode into prepping for spring. Trying to clean and rake out our planting beds, and prepping for the mulch trucks this month.

Before Hopkins, I worked for nine years in a similar position at Gettysburg College in Pennsylvania, and prior to that I was an urban forester at Arlington National Cemetery.

I have a degree in forest management from Colorado State University. My first job was in Oklahoma, then as an extension agent at Penn State, delivering educational programming in urban forestry and horticulture topics.

At Homewood, what's the approach to landscape design?

Every landscape is different, and each one is designed. However, most of the campus is naturalistic in design, though there are some more formal areas.

Sometimes I'll inherit landscape designs from new projects—for example, a building gets built and plans call for landscaping that my team inherits. Other times we're creating new designs or doing updates. For example, at the greenhouse on Bowman Drive, we just replaced overgrowth with a variety of plant material including oak leaf hydrangeas.

Personally, I like to create more diverse landscapes, which tend to be healthier, live longer, and provide greater benefits.

What are your favorite areas of campus?

I'm partial to forested areas, including the Bufano Sculpture Garden, just below the Athletic Center, which is a remnant forest. It was a neglected area in the past, and we're trying to restore it to a native forest area, planting native species as an understory because we're beginning to lose the canopy.

How does your team work with trees?

I keep an inventory of all the trees; there's about 2,700 on campus, not including forest areas.

Some trees were probably here before the campus was. There's an Eastern red cedar—the biggest one I've ever seen—between Brody Learning Commons and the Merrick Barn. There's lots of magnolias. Wyman Quad used to be lined with them, but we've lost some over the years.

We have dozens of flower beds all over campus, with thousands of annual plants. Our horticulturist, Rich Gutberlet, oversees most of the annual beds and does most of the planting.

We're planting annuals twice a year, in May and September. So the ones that bloom right now, in March, were actually planted in September, like pansies, panolas, or violas. Then the summer annuals will include flowers like begonias, zinnia, pentas, and lantana mixes.

Besides those flowers, what are some of most common plants on campus?

The yew is all over campus, most commonly as a hedge. They have to be pruned four or five times a year, or they'll get crazy big. There's two in front of the Wyman Building that are as big as trees. But we typically use the weeping yew, which stays smaller and shorter. We also have a lot of cherry laurel, a broadleaf evergreen shrub.

Tell us about the green roofs on campus.

We have one of the largest ones in the state of Maryland, and most people don't even realize what it is or define it as a green roof. This is the top of the South Garage—the garage is underground, and its roof is actually the surface for the entire Decker Quad.

At Fresh Foods Cafe, there's something similar—the building is mostly underground, and the top surface is a lawn of grass and shrubs and turf. Then we also have a more traditional green roof on top of the Cordish Lacrosse Center. We maintain all of them just as we would any other landscape.

What about rain gardens?

There's a handful of them on campus, including four at the Undergraduate Teaching Labs building. We have another large one at the Malone Building.

They're designed to be sunken in the ground and filled with plants, to help storm water infiltrate the soil so it doesn't enter sewers as runoff. The rain gardens have to be built to endure harsh conditions, from extremely arid soil to very wet conditions. They're incredibly labor-intensive to maintain because everything has to be hand-weeded.

What's the most challenging part of your job?

Coordinating with 16 employees, along with all the different needs on campus. For example, we'll need to do leaf-blowing, but the people in buildings nearby will face disruptions from the noise. It's difficult to please everyone.

And snow removal. People imagine us removing snow instantaneously, but the real progress can only begin once the snow completely stops, and at that point it will typically take about three hours to clear.

The grounds team are all "essential employees" during a storm. A lot of us will stay here [in Wyman Building 2] the night a storm begins—there's a bunk room down the hall.

So we'll have those 16 people plus myself, plus some volunteers from other shops, and we also contract some workers if needed. We divide into three teams, each covering different "zones" of campus to clear.

What's your favorite part of the job?

Probably keeping track of the tree population. I can monitor them all through our GIS mapping system, which includes specifics on each tree such as species and size. It helps us do everything we can to preserve and care for each tree.

Another thing I'll say is, I walked into this job having a really good crew. They're always supportive, and if I need them to do anything, they'll do it. Being able to have that much trust is a wonderful thing.