How April Floyd learned that pushing yourself feels good 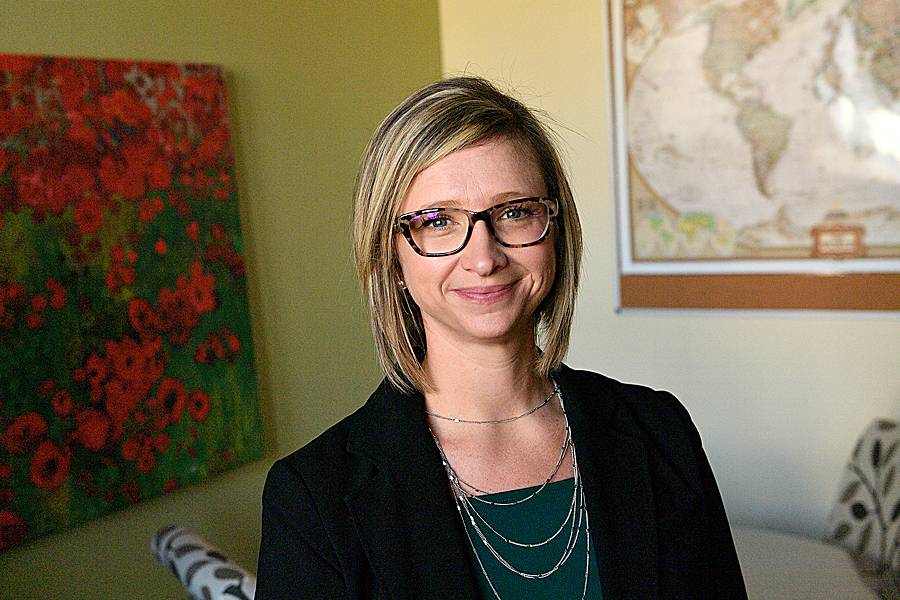 Image caption: April Floyd, senior director of Benefits and Worklife, in her office at Johns Hopkins at Eastern

These days, April Floyd usually gets in her exercise through yoga and long walks with her husband. But a few years ago, she was flipping tractor-trailer tires, holding five-minute planks, and clawing up a daunting exercise machine called Jacobs Ladder.

Before joining Johns Hopkins in May 2018 as Human Resources' senior director of Benefits and Worklife, Floyd had spent five years at Under Armour. The company's intense fitness culture, at first, felt over her head.

"It was super intimidating," she says. "I was always obsessed with nutrition and mental well-being, but not with fitness."

She eventually got there, with the help of a trainer and boot-camp classes that had her sprinting, boxing, weight lifting, and climbing. As the company's head of global benefits and wellness, Floyd completed many of these workouts with a team of her co-workers.

What carries over from her time at Under Armour, she says, is an interest in pushing herself: "knowing how good it feels when I achieve something I didn't think I could do."

But fitness is just one part of the broader health and wellness picture for Floyd, who has a degree in psychology and a background in dance and swimming. This terrain is also covered at Hopkins, where her job includes overseeing wellness benefits and strategies for employees.

Here, Floyd shares some thoughts on staying healthy in body and mind:

Floyd says she's been through some ups and downs with her weight, including gains after pregnancy—she has three kids—and during times of stress. And she says she's tried every fad diet in the book: "boiled egg diet, cabbage diet, you name it."

But she says she's found the most sustainable, realistic approach over the years in using the WellnessWins program from WW (formerly known as Weight Watchers). The point-based system "allows you to indulge, in moderation," says Floyd, a self-described foodie. In addition, the meetings create a social aspect and sense of accountability, she says.

(Note: Johns Hopkins employees are eligible for a discount on WW membership as a work benefit.)

For hydrating, Floyd strives to drink at least 120 ounces of water each day—nearly one gallon—which she tracks by keeping her 20-ounce water bottle by her side all day.

To keep stock of her health and wellness goals, Floyd uses a number of apps, including:

In addition to trying to practice yoga and meditation regularly, Floyd finds one important rule works for reducing stress and negativity:

"Get off social media," she says. "You'll find that your life is a lot better than you thought it was when you compared it to everyone's idealized projections.

"Walking is the one thing that's constant for me and my husband," Floyd says.

They try to walk about 3 miles every day throughout their neighborhood of Bel Air, usually in the evenings, but "we make time for it whenever it fits, even if that's 5 a.m.," she says.

The routine is important for the couple not only from an exercise perspective, "but it's also really good for our time together," Floyd says. "We have three kids, and we both have full-time jobs that take a lot out of us. It's our time to catch up."