Graveside gathering marks 145th anniversary of the death of Johns Hopkins, whose will established the university and hospital bearing his name 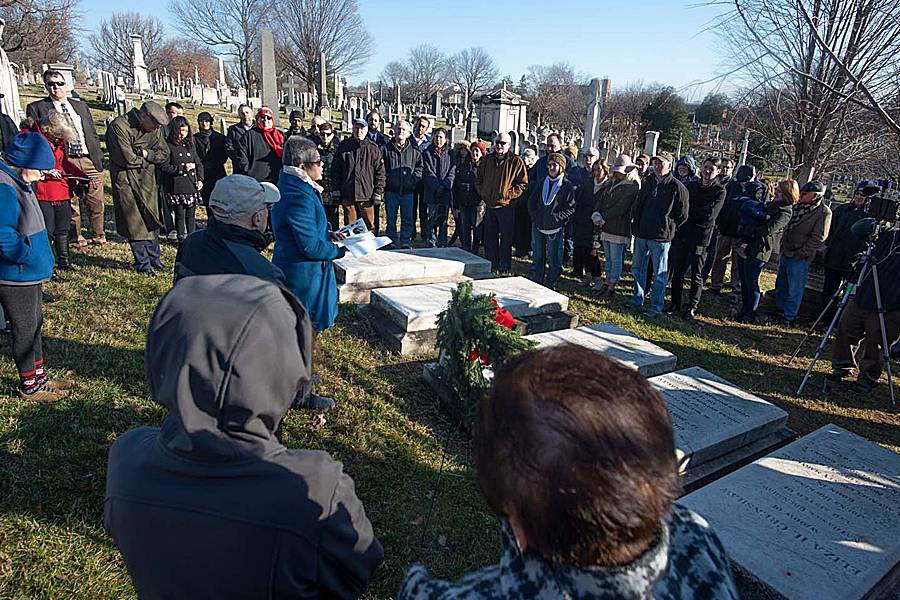 On the 145th anniversary of the death of Mr. Johns Hopkins, dozens of members of the university and health system community and others gathered at his graveside in Green Mount Cemetery for the 20th annual observance recognizing his beneficence.

When Hopkins died on Dec. 24, 1873, his will went into effect, with $7 million designated to establish in Baltimore the university and hospital that now bear his name. They revolutionized higher education and health care and evolved into the worldwide Johns Hopkins institutions we know today.

The brief ceremony, organized each year by university Vice President and Secretary Emeritus Ross Jones, featured a talk by Rooney Peterson, who worked at Johns Hopkins and then spent more than two decades as a volunteer in its Alan Mason Chesney Medical Archives, where she developed her interest in Johns Hopkins history.

Accompanying her at the ceremony was her husband, Ron Peterson, president emeritus of the Johns Hopkins Health System and former executive vice president of Johns Hopkins Medicine.

A wreath was placed at the head of Hopkins' tombstone—as it has been annually since the tradition began—by Aidan and Caroline O'Shea, whose father, Dennis O'Shea, is executive director of communications for the university.