Leana Houser, manager of Homewood Recycling in Facilities & Real Estate, was named the 2018 Bill Heenan Emerging Leader at the National Recycling Commission's Resource Recycling Conference, held in October in St. Louis. This honor recognizes outstanding, emerging recycling industry leaders. Criteria for the award include longevity in the recycling industry, innovation, leadership, program economics, and overall effect on recycling rates. Over her 15 years at Johns Hopkins, Houser has also worked at the Center for a Livable Future and the Office of Sustainability. As manager of Homewood Recycling, she initiates and improves programs that ensure environmental and social responsibility are embedded in JHU operations. 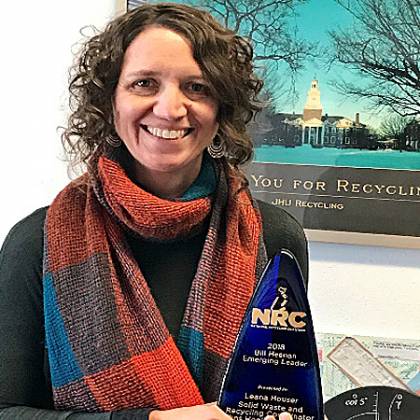 The Homewood campus's recycling rate has grown to 45.4 percent, representing a 75 percent increase over 2013, when Houser started as Recycling manager. She has assisted in the creation of more than 10 Homewood-focused recycling programs, including the popular Free Food Alert program, which has prevented more than 1,000 portions of food from being wasted and has fed hundreds of hungry JHU community members. Houser also helped set up the JHU Furniture Reuse Program, now known as the Hop Reuse Hub, which manages the reuse of campus furniture and donates furniture, recycling bins, and office supplies to local nonprofits and schools. In addition to working on waste management operations, Houser engages and educates the university community through updated recycling bin signage and presentations.

She also helped found the regional network B'CaUSE (Baltimore Colleges and Universities for a Sustainable Environment), serves on the Mayor's Baltimore Clean City Committee, has served on the board for the Friends of Patterson Park, and has been a mentor to numerous interns and employees at Hopkins. 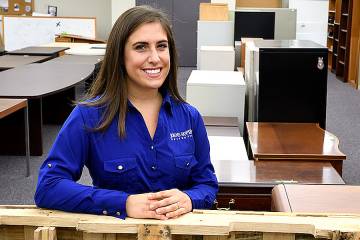 Published Oct 1, 2018
As JHU's recycling coordinator, she runs the Hop Reuse Hub that welcomes castoffs—then sells or donates them