In other news, Robert Bollinger installed as the Raj and Kamla Gupta Professor of Infectious Diseases

Theodore DeWeese has been named vice dean for clinical affairs and president of the Clinical Practice Association, a group practice of full-time clinical faculty and clinical associates. DeWeese, an internationally recognized radiation oncologist, the Sidney Kimmel Professor and director of Radiation Oncology and Molecular Radiation Sciences, will succeed William Baumgartner, who is retiring as vice dean for clinical affairs after more than 35 years with Johns Hopkins. 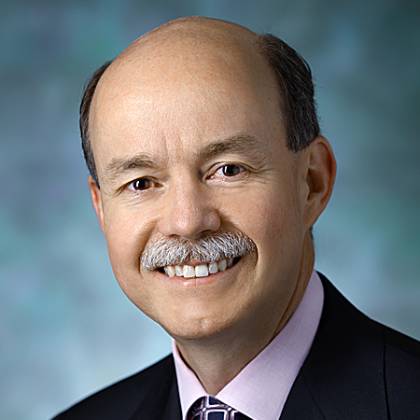 DeWeese came to Johns Hopkins 27 years ago for a residency in radiation oncology, served as chief resident, and completed a postdoctoral research fellowship at what is now the Johns Hopkins Sidney Kimmel Comprehensive Cancer Center and at the Brady Urological Institute. He joined the School of Medicine faculty in 1995 and was promoted to professor eight years later. His first leadership appointment was as director of the radiation biology laboratory research program for the cancer center, from 2000 to 2003.

DeWeese became the founding director of the Department of Radiation Oncology and Molecular Radiation Sciences in 2003 and will continue to hold the department director position until Jan. 15, 2019. Two years ago, he was tapped to serve as vice president for interdisciplinary patient care for Johns Hopkins Medicine.

With research interests that include prostate cancer, DNA damage repair, and the development of radio-sensitizing drugs and small molecules, DeWeese has published more than 170 papers and book chapters, and he has received numerous teaching awards and invitations to deliver named lectureships. He has been a member of several advisory boards and was appointed by the National Academy of Sciences to serve as a scientific councilor for the Radiation Effects Research Foundation in Hiroshima, Japan. He has served on and chaired many Johns Hopkins boards and committees, including Johns Hopkins Medicine's United Way campaign and the Johns Hopkins Hospital medical board. He is president-elect of the American Society for Radiation Oncology.

Robert C. Bollinger, founding director of the Center for Clinical Global Health Education, was installed as the Raj and Kamla Gupta Professor of Infectious Diseases at the dedication of the professorship on Sept. 5 at the William H. Welch Medical Library. Bollinger has devoted his career to medical research in India. He was the catalyst for the National Institutes of Health–supported HIV research program in Pune in 1991 and, since then, has served as principal investigator for many NIH-supported studies and clinical trials in India. He is also director of the JHU Fogarty India Program. Raj and Kamla Gupta emigrated from India to the United States, arriving in 1968 with only $8. Over the next 40 years, Raj Gupta rose through the ranks at the Rohm and Haas Chemical Co. His career includes serving on the boards of many Fortune 500 companies; in his latest position, he was a senior adviser to DuPont. The family's Ujala Foundation has given generous philanthropic support to health, educational, cultural, and social organizations.

Christine Pratilas, an assistant professor of oncology and pediatrics, and Cara Rabik, an instructor of oncology and pediatrics, are recipients, respectively, of the Hyundai Hope Scholar and Young Investigator awards. The awards, which totaled $500,000, are part of National Childhood Cancer Awareness Month and were presented at the Hyundai Hope on Wheels event held on Sept. 22 at Johns Hopkins Children's Center.