Muyinatu "Bisi" Bell, an assistant professor in the Department of Electrical and Computer Engineering, has been selected to receive the National Institutes of Health's Trailblazer Award. Bell has joint appointments in the departments of Biomedical Engineering and Computer Science. She is director of the Photoacoustic and Ultrasonic Systems Engineering Lab, known as PULSE, and a member of the Malone Center for Engineering in Healthcare. 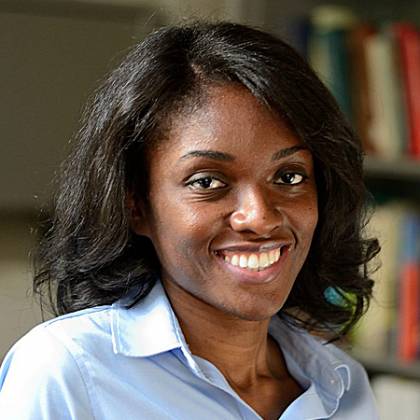 The three-year, $624,000 award, administered through the National Institute of Biomedical Imaging and Bioengineering, supports innovative early-career researchers tackling high-risk, potentially high-impact projects. The ultimate goal is to foster the invention of methods, instruments, and materials that will open new avenues of research.

Bell and her team will use the award to conduct pioneering research that integrates deep learning with ultrasound image formation to provide interventional radiologists with a new (and clearer) type of ultrasound image. These novel images display only structures of interest, such as a needle tip as it is inserted into the kidney and the corresponding kidney target location, addressing often problematic ultrasound image-quality issues. The proposed approach is the first of its kind to use data-driven methods to replace the traditional ultrasound image formation process.

Also at the Whiting School of Engineering

Paulette Clancy is the new head of the Department of Chemical and Biomolecular Engineering. She comes to Johns Hopkins from Cornell University, where she was the Samuel W. and Diane M. Bodman Professor of Chemical and Biomolecular Engineering and director of the Cornell Institute for Computational Science and Engineering. She leads one of the top groups in the country studying atomic- and molecular-scale modeling of semiconductor materials, ranging from traditional silicon-based compounds to all-organic materials.

Clancy was the first female director of Cornell's School of Chemical and Biomolecular Engineering, a position she held from 2002 to 2010. A fierce advocate for the increased representation of women in engineering and the physical sciences, she was founding chair of Women in Science and Engineering faculty in Cornell's College of Engineering. Among her awards for that advocacy are the AIChE National Women's Initiatives Mentoring Award, the Alice Cook Award for services promoting women in science at Cornell, and the Zellman Warhaft award for the promotion of diversity at the College of Engineering.

At Johns Hopkins, she succeeds Konstantinos Konstantopoulos, who chaired the department from 2008 until 2017, and Sean Sun, who served as interim chair for a year, beginning in July 2017.

Steve Hanke, a professor of applied economics in the Department of Environmental Health and Engineering and the Department of Economics, has been named the ECAEF Gottfried von Haberler Professor by the European Center of Austrian Economics Foundation in Vaduz, Liechtenstein. This is the fourth honorary professorship held by Hanke. On Sept. 24, as the von Harberler Professor, Hanke will deliver the annual Steve Hanke Lecture on Money, Banking, and Markets, which is jointly sponsored by the ECAEF, University of Lichtenstein, and the Lichtenstein Academy.