As visual projects archivist at the Alan Mason Chesney Medical Archives, he transforms analog materials for use in the digital age 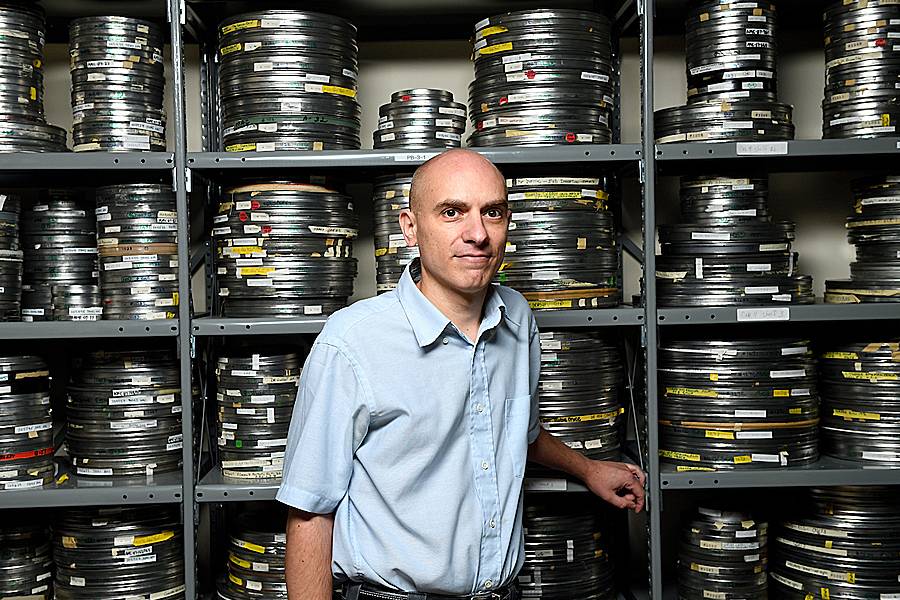 Authors, filmmakers, and researchers frequently turn to the Alan Mason Chesney Medical Archives of the Johns Hopkins Medical Institutions when they're working on book or documentary film projects. From Alfred Blalock, Helen Taussig, and Vivien Thomas' trailblazing research that went into the "blue baby" heart surgeries to Nobel Prize-winning microbiologist Daniel Nathans' identification of restriction enzymes' role in analyzing DNA fragments and mapping genomes, the Chesney Archives contains the personal papers of a number of pioneering Johns Hopkins doctors, scientists, and technicians, along with various audio recordings, photographs, and film/video documentation. And when those analog materials need to be digitized to be included in a book or documentary film, people go to Timothy Wisniewski, who has been the visual projects archivist at the Chesney Archives for the past 12 years. We sat down recently to talk with Wiseniewski about the audiovisual collections of the archives, which are housed on the Johns Hopkins at Mount Washington campus.

What does a visual archivist do?

I manage the audiovisual collections and the photographic collections at the Medical Archives. The photographic collections are primarily photographs taken by the Hopkins medical divisions over the years. Since the founding of the institution, there was clinical photography, portrait photography, photography for educational purposes. Starting around the 1920s, you start seeing filmmaking happening around the medical campus. Researchers and clinicians were doing experiments with film, using time-lapse cinematography in experiments, filming surgeries, those sorts of things. These filmmaking practices gave birth to the film and video collections that we now have. I also assist our patrons who are interested in researching these collections. So essentially, processing the collections, digitizing collections, dealing with the reference requests that come in.

Is all of that archival material housed here?

Only about a third of our total holdings are actually here on-site. Most of the photographs, and all of the film, are here, but over 7,000 videotapes and hundreds of sound recordings are stored off-site.

When the Archives decides to digitize a film, photos, or sound recordings, what is that process like? Are some digitization efforts the result of specific projects or research grants? Is it mostly an on-demand service? I ask because I imagine the work is both labor-intensive and resource-intensive.

It depends. Sometimes we get grant funding to digitize entire collections, either internally or through a foundation—for example, there may be interest in funding the collection of an influential physician. In other cases, we might receive donor funds to digitize an institutional collection, such as photographs from the public relations department, or an individual clinical department might have a run of their annual group portraits that they want to have digitized, so they'll pay to have that done. We also do a lot of work on demand for historians and other scholars. A patron could be interested in a specific set of photographs for an article or a book or a documentary film. Then we'll do just a small set of on-demand digitization.

Of the entire AV collection, how much of it is currently digitized?

How did you get into doing AV archival work?

I came to AV archival work from an arts background. I studied photography and video during my undergrad at MICA, and after graduation I worked in darkrooms doing custom black-and-white printing for years. That's where I began printing a lot of archival work for local museums and historical societies. I was also always into classic cinema and fascinated by the medium of film. The Enoch Pratt Free Library has a great circulating 16mm film collection, which I routinely borrowed from for shows and screenings around town. Eventually, I came to the realization that there were tons of film collections like this out there in libraries, schools, and other institutions that needed to be preserved. I decided to go to library school at the University of Pittsburgh to get into archival work, and from there I gained experience working with various archival film collections before coming to Hopkins.

I usually start the day responding to reference requests and other emails, and assessing any work that needs to be done right away. I might have a morning meeting with staff to discuss various issues and projects, such as our website, which we are currently redesigning. Then I'm working with our student employees or volunteers to process and catalog new collections. After lunch, I'm probably digitizing photographs or videos for patrons and uploading new content for public access. I'm also usually working on one or two long-term projects, like fixing up an older collection that isn't properly organized or doesn't have adequate description, in order to make it more accessible.

Once a set of photographs, a recording, or film/video has been digitized, is it made available for future use by other departments or researchers? Are items that have already been digitized searchable online?

Whenever possible, and it usually is, the answer is yes. We make digitized photos, films, and sound recordings available via our online catalog and our Flickr, YouTube, and SoundCloud pages. The main exception is when an item is restricted due to its containing protected health information as defined by HIPAA, the federal health privacy law. An obvious example would be a photograph in which a patient's face is clearly visible. Considering the health care context of our content, it is perhaps surprising that a majority of our visual collections do not contain protected health information.

Is it fun to go through some of these collections and see what people were working on over the years at Johns Hopkins?

Yes, one interesting thing that I recently discovered is that there was a heart sound laboratory here at Hopkins in the early '50s. They were doing sound recordings of hearts with some early tape machines. They were recording different heart conditions and using these tape recordings to train students on how to listen to and diagnose different heart conditions. They recorded all these heart sounds, and then they would play them back through a sound spectrograph and plot spectrographic recordings of the heart sounds. And they would show slides of the spectrographs to the students while they played back the tape recordings to visually pinpoint different conditions—like, "right here, that's a murmur." That was really cool.

And I'm working on quite a few things right now. I am digitizing some film footage and a bunch of photographs for a documentary project on the history of genetics. Victor McKusick was a physician at Hopkins for a very long time and was one of the movers and shakers in the international medical genetics movement. He was also a chronic photographer—he had a camera on him all of the time. And there are tons of photographs in his collection of famous geneticists, different genetic conditions, and things like that. So there's a very large collection that the documentary film project has been looking through and requesting. I'm searching the collection, which is largely unprocessed, and using McKusick's handwritten index to find photos associated with the different subjects they're interested in.

How labor-intensive is the digitization process?

With audiovisual digitization, everything happens in real time, so a recording that lasts hours takes hours to digitize. So it can be labor-intensive, just in terms of the time it takes. It can also be labor-intensive in terms of the condition of the media. Sometimes there are tapes that need to be baked. Old tapes can acquire what is called sticky shed syndrome, where, essentially, the tape binder becomes sticky because it's absorbed the hydration from the air, which causes serious problems during playback. What we actually do is stick the tapes in a food dehydrator, and they sit in the food dehydrator for about 24 hours, and then after they've baked and have re-acclimated to room temperature, you can play them. It's a long-established method in AV archives, and it works really well.

Given your knowledge of the AV collection, are there items that you hope to digitize in the future, just to make them more available to researchers?

Yes. Sometimes I'll pre-emptively digitize items. For example, I've decided to systematically digitize all of the oral history tapes in our collection. We have oral history tapes dating from the 1970s to the 2010s. These are alumni and other people associated with the medical divisions who were interviewed over the years. Some of the tapes in our legacy collection are with living individuals, such as people who were interviewed in the '90s, but we don't have any releases or paperwork on them, or they are restricted for a set number of years, so we're sitting on those for the moment. But there are many more to be digitized before these, and for people who are currently being interviewed with digital recorders, we are getting releases signed so we can make their interviews available as they come in.