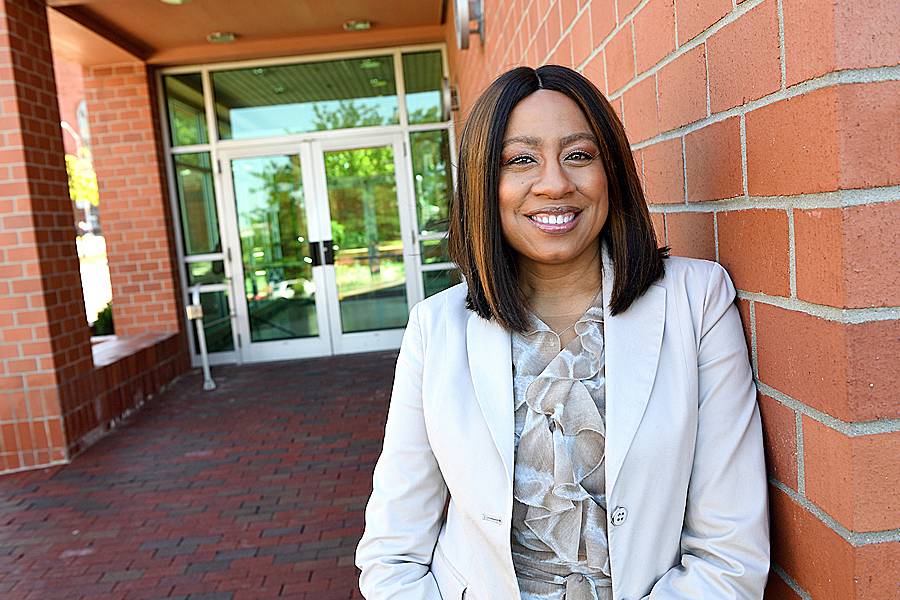 Image caption: In her role as economic inclusion recruitment coordinator at Johns Hopkins, Julia Lynton-Brown focuses on helping hire residents who live in selected ZIP codes around the city.

For Teshome Wubishet, the motivation to work at Johns Hopkins came from an instinct in his gut, he says, after passing by the university so often from his home in Waverly.

"Something inside me said, You can work there," says Wubishet, who had found himself unemployed after his research experience at a pharmacology center.

But after seeing no responses to several applications, Wubishet says his optimism was starting to wane.

That's around the time he was referred to Julia Lynton-Brown, the economic inclusion recruitment coordinator at Johns Hopkins. In her role with HopkinsLocal—the university and health system's widespread initiative to boost local economic opportunities in Baltimore—Lynton-Brown focuses on helping hire residents who live in selected ZIP codes around the city.

"A lot of candidates are amply qualified," she says. "I reach out to department administrators and program recruiters across JHU to let them know about these individuals."

Lynton-Brown also collaborates personally with candidates, helping refine their resume and interview skills while steering them toward their best job prospects. "It's career coaching 101," she says. "I'm helping them articulate their skill sets and experience as they define their career path."

With Wubishet, Lynton-Brown worked to make sure his qualifications-his research experience and associate degree in biotechnology-could shine through for fitting opportunities.

"We talked a lot, through phone calls and emails," Wubishet says. "She helped me fix my resume."

Ultimately they landed on an opening that looked like a good match, with JHU Pro Health. And that's where Wubishet works today, as a research program assistant for clinical trials.

"Even though I was so motivated on my own, [Lynton-Brown] helped me achieve the next part," Wubishet says of his position.

Lynton-Brown uses a number of strategies for connecting with candidates like Wubishet. Using systems such as JHU Jobs, she looks for applicants who live within the 16 Baltimore ZIP codes that HopkinsLocal targets to increase city hiring.

She regularly attends career fairs around the city, such as this month's Global 1000 event and the upcoming WorkBaltimore in September. She also works with local agencies, community organizations, and educational institutions (including Morgan State University) that host career coaching efforts.

"We're out there in the community, developing long-lasting partnerships with groups around the city promoting career development, and at the same time working closely with recruiters and hiring officials," she says.

In addition, Lynton-Brown works with the Johns Hopkins Health System to refer qualified candidates to HopkinsLocal positions there.

HopkinsLocal has focused on connecting residents to targeted entry-level positions at JHU that do not require a bachelor's degree, including administrative and research support roles, patient services, custodian, lab, and animal care work. Since its launch in 2015, the initiative has already exceeded its goal of hiring 40 percent of these applicants from HopkinsLocal ZIP codes by 2018.

Lynton-Brown says her efforts are most successful when hiring managers around the university are on board for supporting the goals of HopkinsLocal.

"On the front end, we're working hard to refer qualified individuals from Baltimore who are vetted and ready to work," she says. "The HopkinsLocal hire initiative is an important program for finding strong talent."

Recruiters, department heads, and other employees in charge of hiring can reach out to Lynton-Brown at jlyntonbrown@jhu.edu. For more information on HopkinsLocal hiring, interested candidates can check out this webpage or email HopkinsLocalHire@jhu.edu.