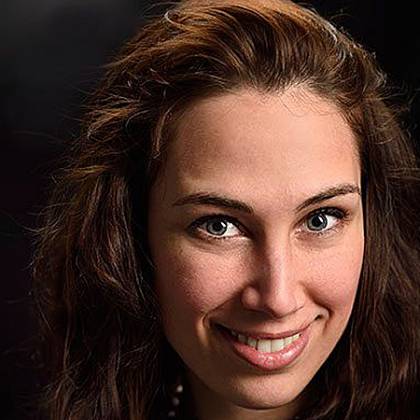 Meredith Ward, a senior lecturer at Johns Hopkins since 2008, is the new director of the Program in Film and Media Studies. Ward is a film and media historian and theorist with a specialty in sound media. She received her doctoral degree from the Screen Cultures Program at Northwestern University. Her research focuses on cultural history as it relates to film and media historiography. Ward's book, The Static in the System, published by the University of California Press, will be released later this year.

Ward has been deeply involved in the work of her film students. She is the founder of Studio North, the university's student-run film production company that funds prestigious student projects; creative director of the Studio North/Saul Zaentz Television Writers Room; and the director of the Johns Hopkins Film Contest and Festival for high school students. She is the faculty adviser to the Johns Hopkins Film Society and advises on the annual film festival. Ward has also served as an academic adviser to many students as well as faculty adviser to some of Johns Hopkins' Woodrow Wilson fellows, PURA grant recipients, Arts Innovation Grant winners, and students completing capstone projects.

Linda DeLibero, who has led Film and Media Studies for the past 17 years, will continue to teach as a senior faculty member, complete a book project, and serve as special advocate for alumni and outreach. DeLibero directed the program during an impressive period of growth and was a key player in the creation of the JHU-MICA Film Centre building, which opened in 2016. The 22,000-square-foot facility is home to Johns Hopkins' film and media programs and to MICA's film programs. DeLibero has also been a co-director of the Film Centre, along with a faculty member from MICA.

More from the Krieger School of Arts and Sciences

Anand Gnanadesikan has been named chair of the Morton K. Blaustein Department of Earth and Planetary Sciences. Gnanadesikan trained as an oceanographer, and his primary expertise is in how the ocean circulates and influences marine life, climate, and atmospheric chemistry. He earned his doctorate in physical oceanography from the MIT/Woods Hole Joint Program in Oceanography and spent more than 15 years at Princeton University and NOAA's Geophysical Fluid Dynamics Laboratory working to develop computer models of how the planet works. He joined the John Hopkins faculty in 2011.

Emily Riehl, an assistant professor of mathematics, was among the 27 notable contemporary women in math featured in the March 2018 edition of Notices of the American Mathematical Society.