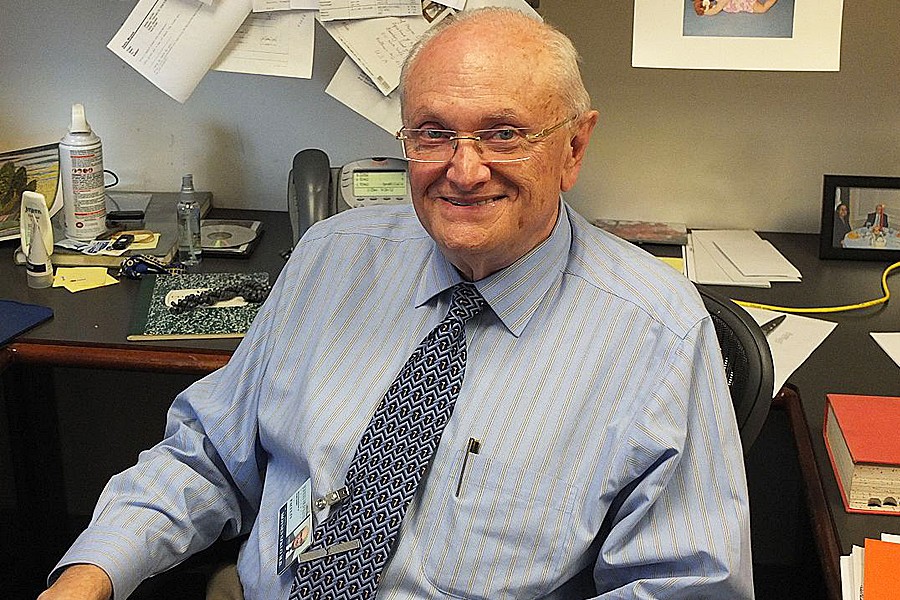 Five decades of being a mentor who is "exemplary in spanning the highest professional and personal standards while being generous, humble, and honest," has earned epidemiology professor Moyses Szklo the 2018 Provost's Award for Excellence in Faculty Mentoring.

That description was submitted to the award committee by two of Szklo's fellow professors in the Department of Epidemiology at the Johns Hopkins Bloomberg School of Public Health: Josef Coresh and David Celentano, who is chair of the department. The nominators included support from dozens of letters and emails as they outlined Szklo's transformative contributions to epidemiology teaching and his position as a role model to doctoral students, faculty, and division leaders.

"His style is low-key, but his scholarship, humanity, dedication, and attention to detail make a tremendous impact, which has led to the success of his mentees."
From nomination letter for Moyses Szklo

Among his many accomplishments, Szklo taught advanced epidemiology courses for decades at Johns Hopkins and around the world, and created a leading textbook on the subject. He has helped thousands of students from many different countries get training in epidemiology by serving as director of the Johns Hopkins Graduate Summer Institute in Epidemiology and Biostatistics since he founded it in 1983.

He has mentored researchers involved with important cohort studies that led to thousands of publications, and he guided some of them to take over leadership positions in these career-building endeavors. He has invited faculty members from his home country of Brazil to take part in studies and train there with Johns Hopkins faculty. He also has mentored faculty members in his 30-year role as editor-in-chief of the American Journal of Epidemiology.

"He worked directly with so many faculty for a load that most of us would find overwhelming, never mind sustain for decades, with humility and dedication," Coresh and Celentano wrote. "His style is low-key, but his scholarship, humanity, dedication, and attention to detail make a tremendous impact, which has led to the success of his mentees."

Coresh noted that Szklo has mentored him in academic, professional, and personal matters on his journey from student to endowed chair. "[Szklo] supports my leadership. He attends events and seminars to be helpful but never undermines the authority of those of us who inherited the fruits of his labor," Coresh wrote. "I recall his sharing with me the secret to providing good criticism when needed: Do it privately."

Szklo says it has been a privilege to be in an environment where teaching and mentoring are highly valued. "From my colleagues, I have learned—paraphrasing Margaret Mead—that what is important is to teach how to think, not what to think," he says. "It is an honor and a joy to get a mentoring award, as I have always enjoyed interacting with, and listening to, students and young faculty."

Szklo will be honored at a universitywide all-chairs meeting that is being planned for Sept. 17.