Dust off your wheels 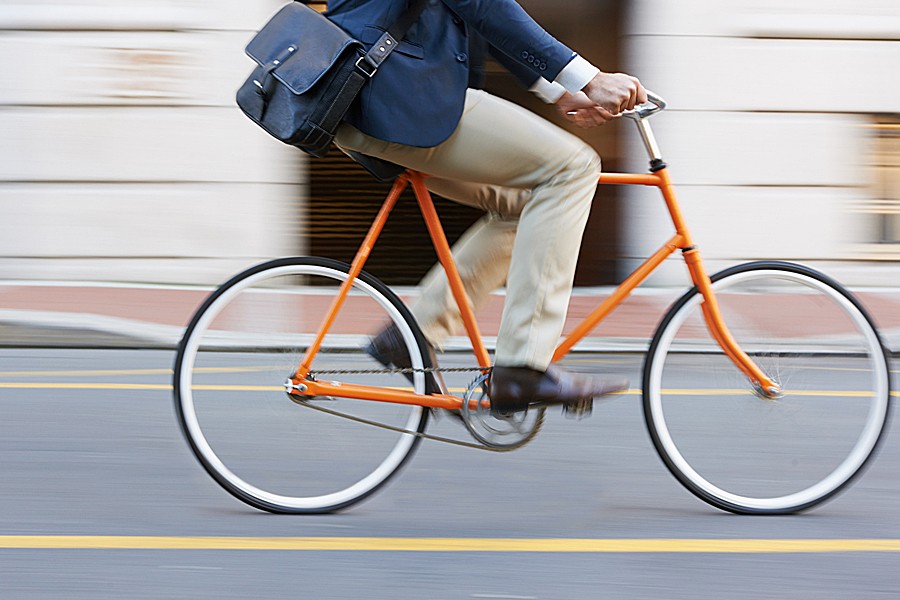 The city's annual Bike to Work Day has been moved to June 1 because of the weather forecast for May 18, the date on which the event was to have taken place. This story, published before the city's announcement, has been edited to reflect the change.

If you've ever considered leaving the car at home and pedaling into the office, Baltimore's annual Bike to Work Day—which will now take place on Friday, June 1, rather than the previously announced May 18—provides the opportunity to give it a try when other riders will be on the road, too. That's what encouraged regular cyclist Suzanne Kantt to ride from her home in the Catonsville area to her office in the Johns Hopkins Whiting School of Engineering's Center for Educational Outreach on the Homewood campus during the 2017 Bike to Work Day.

"I wanted to see if I could do it," Kantt says, adding that she doesn't always ride because the direct route isn't very bike-friendly, due to road construction and heavy car traffic. She took a slightly roundabout way last year, finding strength in numbers. "Bike to Work Day was nice because there were other people riding," she says.

The Baltimore Metropolitan Council has partnered with a number of local businesses and organizations to offer 25 bike-to-work pop-up stations spread around the city on Friday, offering morning riders snacks, drinks, and some bike gear and services at a few locations.

People heading to the Homewood campus can drop by the station at MedStar Union Memorial Hospital at 33rd and Calvert streets. Riders heading to the Peabody Institute can grab a coffee or water from the AIA Baltimore/Baltimore Architecture office at 11 W. Chase St. or the Garden Tower Apartment building at 111 W. Centre St.

Commuters to the East Baltimore campus can drop by the station sponsored by the Johns Hopkins Office of Sustainability, which will be located from 7 to 9 a.m. in front of the Armstrong Medical Education Building at 1600 E. McElderry St. "We'll be giving out snacks and T-shirts," says Jason Mathias, sustainability coordinator. Also in attendance will be Light Street Cycles, to give free safety checks and do light work on bicycles, which can include tightening brakes, tweaking gears, pumping tires, or installing tubes (tubes can be purchased during the event). The Baltimore Donut Bike Crawl, which raises funds for Hopkins' Wilmer Eye Institute, will also be on hand, advertising its upcoming donut shop bike crawl on Saturday, June 2.

Mathias notes that, anecdotally, about 100 people commute to the medical campus when the weather permits. "As transit has become the No. 1 greenhouse gas-emitting category, more than energy production, we look to members of the Hopkins community to find ways to reduce those emissions, be it moving closer to work through the Live Near Your Work program, using public transit, carpooling, walking, or biking," he says. "During a fair-weather day in May, we always look forward to celebrating the cyclists and thanking them for making that choice."

Lisa Scotti, a Johns Hopkins nurse practitioner who works with the Baltimore City Health Department STD Clinic, has used cycling as her primary mode of transportation for years. "I think I've noticed, over the last couple of years, more cyclists out there since I first started riding all the time," she says.

"I feel like Baltimore is becoming more of a bicycling city," Scotti says, adding that riding in Baltimore can still, at times, be challenging. "I think it's easy for drivers to be in their own world trying to get where they need to go and not realize that the individual next to them on a bike is much more vulnerable."

Mathias says that the Office of Sustainability is doing what it can to support the city's efforts to make biking in Baltimore safer. "We also work with the city of Baltimore to support their ongoing bike infrastructure work and look forward to their recently unveiled plan to connect Martin Luther King Jr. Boulevard with the [Johns Hopkins] medical campus through a new east-to-west cycle track along Centre and Monument streets," Mathias says of the planned route. This separated cycle track "will make Baltimore, downtown to the medical campus, a safer place to ride, whether for fun or commuting to work."